Life goes on, whether you want it to or not..."

It seems to be my mother's favorite saying these days.  It's kind of what she uses to fill an empty space where conversation should be.  This is usually followed by the inevitable "I'm old, Bev" monologue, running thru her family members who have left her and whether she's going to live to hunnert.  Today was the first day that she actually said she wasn't sure she wanted to live to hunnert.

She seemed very tired today.  I woke her up when I came, after lunch, to deliver her laundry.  But I almost always wake her up.  She seems to spend her time napping.  Today, however, she seemed just more worn out than usual.

In fact, it kind of scared me into taking a series of photos of her today, since I hadn't taken any in awhile. 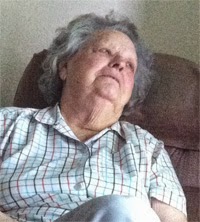 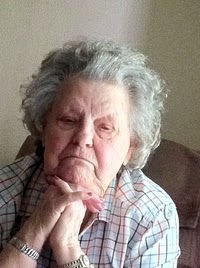 Again, she didn't recognize the picture of Brianna and Lacie on the back of my phone and asked who those girls were when she saw my phone.  The other day she asked me where Paul is these days because she hadn't seen him in awhile.

I had done her laundry, but I'm going to have to steal clothes from her.  I used to have a full basket every week, but for the past 3 weeks I have only had underpants, not even bras.  Since she wears the same 3 or 4 outfits every day, surely she needs something washed by now, but ever since Atria apparently told the residents that clothes could not be washed (presumably on the day they were shutting off the water for the day), so not to leave clothes out to be washed, she has not given me any clothes, though I remind her that Atria doesn't wash her clothes; I do.

The thing that gives her the most pleasure is the garden area outside her door.  If we aren't discussion what I am going to be doing at night, she is telling me how beautiful the garden is, how she loves it that the spring leaves have popped out on the bare trees (which apparently they did overnight, to hear her tell it). She finds more beauty in the green of leaves than anybody I have ever known.  Whenever I take her out anywhere, what she notices the most are the colors of the trees.

When she talks about the garden, her eyes sparkle and she doesn't have that tired look any more....and I am so grateful that we never moved her into the place in Petaluma, where her apartment would have looked out on the parking lot and no greenery. 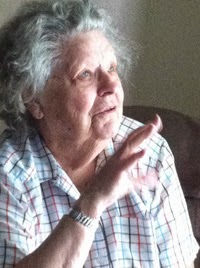 Days like today make me realize that her days are growing shorter...and there is a part of me that hopes she makes it to hunnert after all.
Posted by Bev Sykes at 6:32 AM