Walt and I are merely subjects in this little kingdom of ours.   Our world is ruled by two queens, assisted by the Court Jester.

Walt came in the other day, watching Sheila out in the back yard and decided that she is the queen.  A few years back, when the last batch of puppies left, there had been a lot of peeing on the dog beds and I put them out in the back yard to air out, since these particular beds were difficult to put in the washing machine.

It rained and the pillows got soaked.  But when the sun came out, Sheila claimed them as hers.  She has more or less moved herself out into the back yard, sometimes even through the night.  No matter when you leave the house, you peek through the slats of the fence and there is Sheila, watching over the kingdom. 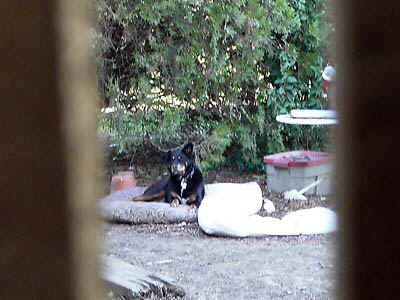 Day after day, hour after hour, in sun or in cold, Sheila is watching out for us.
But if Sheila is the Queen, Polly is the Vice-Queen, for it is she who makes sure that things in the castle run properly.  Polly never sleeps, not really.  Those ears are always alert to the slightest movment in the castle and if she decides that movement deserves investigation, she is right there to make sure things run properly. 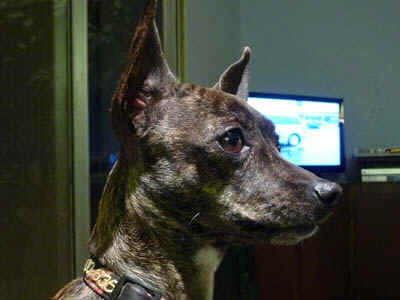 Polly runs the day.  This morning, for example, I woke up, but wasn't ready to get up yet, so I didn't let her see my eyes were open.  I just lay there pretending to be asleep ('cause God help me if I actually GET up!).  At some point I heard the other two dogs come in, slowly.  It was breakfast time, and why wasn't I up?  Polly let out one bark, kind of softly.  I don't speak dog, but it was obvious she was telling them that I wasn't awake yet.  They turned around and went back into the living room.

When I finally decided to get up, I opened my eyes and started to sit up.  Polly immediately let out three or four barks and the others came running.   All the while I was getting the food ready, Polly was barking, encouraging me to hurry! hurry! hurry! because they were going to die of starvation if I didn't move as fast as I could.

It is Polly who runs to get me when the timer goes off on the stove, just in case I didn't hear it (and actually, sometimes I don't).

Around 4 p.m., Polly comes into my office quietly and whines, every   so softly.  Over and over again.  She thinks it's time to eat.  I pet her on the head and tell her it's too early.  You can almost see her sighing, shrugging her shoulders as she turns around and leaves.  An hour later, she's back again.  When I finally get up, she races to Walt's recliner, jumps up and gives the bark-bark-bark announcement to the other dogs, who come running in.

Polly lets me know when Walt is coming home.  She has a different bark for "look out for that scary person walking that scary dog past our house," and "yippeee!  Daddy's home!"
She always whines when I am in the bathroom.  I"m convinced she wants me to know she is there so I will remember to open the door again, and not stay swallowed up behind that wall.

As for Lizzie, she doesn't really have a function except to make us laugh and to love us unconditionally.  What a perfect job for a court jester.   (What do you expect from someone who looks like the Muppet Rolf) 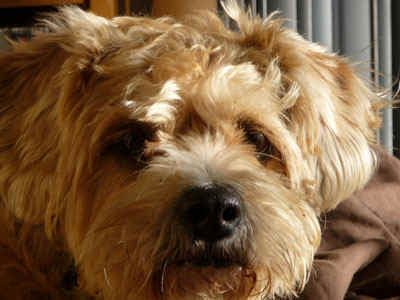 We're very lucky to have these dogs to take care of us.  I don't know how we would be able to figure out anything without them.
Posted by Bev Sykes at 8:54 AM

Email ThisBlogThis!Share to TwitterShare to FacebookShare to Pinterest
Labels: dogs

Funny how the dogs let you live in their home.

So very sweet. You and Walt are blessed!