We bought a plot of land today.

We've never bought land before.  Well, we bought a house in Oakland in 1968 and lived there happily until 1973.  Friends of ours bought additional houses or plots of land, but we didn't until we moved here in 1973.

But today we signed the papers and bought a plot of land. 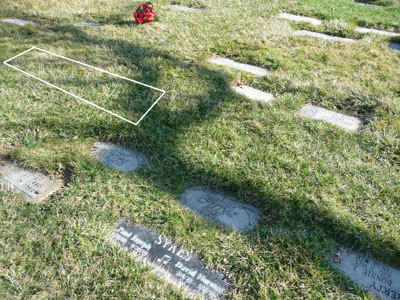 I was out in the cemetery recently and noticed that the empty slots around Paul and David's grave site are filling up.  Somehow people just keep dying in this town.  Go figure.

Anyway, I contacted the cemetery to ask about unsold plots near the boys and found that there were two side-by-side plots nearby.  Kind of the movement of a knight on a chessboard.

This seems to be a good area.  Not so close that we are crowding them.  They can have their own space, but we will be close by so that on judgement day, if all the souls are going to rise out of their graves, we will be there to ground them for all eternity.

Anyway, they put the plot(s) on hold for us, and today we went and signed the contract and Walt wrote the check.  We now own land in Davis and will eventually rest there permanently.  It turns out these are two side by side plots, so that if I die first, Walt can follow my wishes and give me a grave marker that says "it was all juice and crackers," and then when he dies, the kids can replace that grave marker with whatever they want, either a single one for Walt himself, or a double one for the two of us.  We will be beyond caring.

My experience with buying grave plots has been somewhat...maybe unique?  I never bought a grave plot until my father died. I don't think I went with my parents when they picked our my sister's gave site.  But when my father died, my mother and I went to the undertaker to choose his coffin.  This was not a sad death for us and the undertaker was the only serious one in the room, as my mother and I giggled about our various choices.  She felt the need to apologize to him for our seeming irreverent attitude.

We also giggled when we were shown available plots in the cemetery.   This particular cemetery sits around a small hill and when we were offered one site, my mother asked about putting him on the other side of the hill, so he could be closer to my sister's grave.  The cemetery guy said that was probably a better choice, since it was farther away from the freeway and would be "more quiet."   I'm not sure how that could matter to my father, but he is in the "quiet" section of the cemetery.

I have kind of blanked out on buying David's grave, but, of course, when we went to pick a site for Paul, where he could be buried with David, was when Audra remembered that Paul had joked that he wanted "f**k this s**t" written on his grave marker.  Irreverent was it was, we gave him his wish using "fts" on the grave marker.

I will say one thing, that picking out your own grave site and paying for it while you are still alive is a heck of a lot more pleasant than having to do it for a loved one who has just died.

I've never bought a grave site either. My dad belonged to a "Lodge." These organizations, many founded more than a hundred years ago, were often social groups, but they existed in order to make sure that Jewish people would be buried according to our custom.

My husband belonged to a lodge when I married him, and I have been paying the dues since before we were married. I was allowed to use part of our "spend-down" to pre-pay funeral costs, so I have ensured that we will have "kosher" funerals.