From the Sublime to the Ridiculous

By this time of night, I usually have tomorrow's journal entry long published but it's been a long day and I've had a lot of catching up to do before I could write this.
We left kind of late-ish morning to drive down to Oakland to attend my mother's stepson's funeral (funny that I don't think of him as my stepbrother). 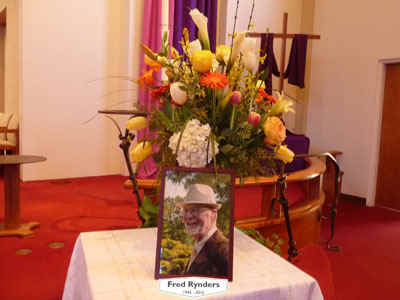 As memorial services go, it was very nice.  There was a Mass, nice singing, a fairly large turnout of people who celebrated his life, and a reception following at the local country club.  I got to see probably all of the family, very few of whom I actually know, but I talked with those I did and met a few I didn't.

My mother was fine, but was getting really tired by the time Walt and I left.  Sadly, I had a show to review, so we couldn't leave early to take her home, and she was going to have to wait until Fred's brother Ed could take her back to her house.  The two of them cleaned up pretty good so I had to take their picture! 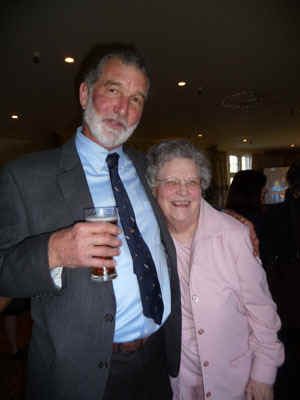 When we left the reception, we drove straight to Winters, 10 miles west of Davis, because I was reviewing a show for the Winters Community Theater.  We were about an hour too early and it was too late to go home, so we had dinner at the Putah Creek Cafe (where I took Walt, Ned and Marta for Walt's birthday).

While we waited for our meal, Walt was lost in the intricacies of his new cell phone 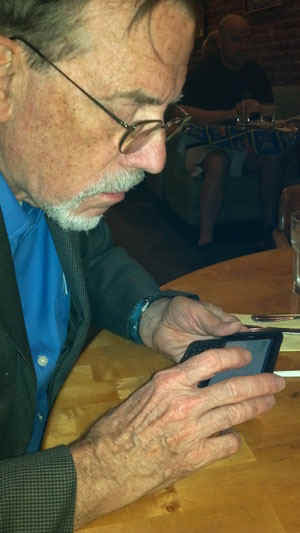 When my BOC (Bacon, Onion, Cheese) burger arrived, it was about the tallest burger I'd ever seen and I had to eat it with a knife and fork. 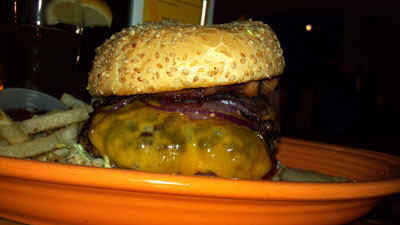 We finished in plenty of time to go across the street to the theater, where we were seated with Debra LoGuercio, the editor of the Winters Express.   She's a delightful person and has a great sense of humor.  We had been joking for the past week, on Facebook, that we knew the Winters folks serve champagne at their opening night gala and Debra said she should bring a flask of vodka because it was better than the cheap champagne.  She did and we had fun sharing it.

When we got home, the dogs had been fed by our friend Jessica but Walt discovered I had forgotten to unlock the dog door before we left in the morning, so they had been in the house all day.  I keep a puddle pad on the floor for Polly, who has been very, very good at using it (which is the next best thing to going outside to pee).  From the amount on it tonight, it looks like all three dogs had peed there during the day!   Fortunately, it holds a lot of liquid.

Such a full day and I'm zonked.  Tomorrow we go to see South Pacific.  Three show weekends are always exhausting, and if you throw a funeral in there too...
Posted by Bev Sykes at 12:55 AM

Very busy weekend, and it's only Saturday! Glad the burger exceeded your expectations - hopefully that went for its taste, too. And dinner with friends makes it even better.

Thank goodness for the puddle pad! ;-)
I'm always impressed by what you accomplish in a day.