I was sitting here peacefully checking Facebook when the phone rang.   It was Peach. She had just talked with my mother and was worried about her.   It seems that she said she's been having pain in her left arm.  When I talked to her yesterday (twice), she confessed that she's just not feeling right and has been "weak and dizzy."

I naturally called her immediately.  She's angry with Peach for "spilling the beans," but agreed to call the Kaiser advice nurse when I pointed out that pain in the left arm can be a symptom of a heart attack.  I asked if maybe she had slept on it wrong and she said that the pain had actually started yesterday afternoon.

So she agreed to call Kaiser and then called back to let me know she had a 2 p.m. appointment.  I contacted Susan, at the book store, and told her I couldn't work and I took off for San Rafael.

It was a beautiful drive.  All the trees are in blossom in the mobile home park where my mother lives. 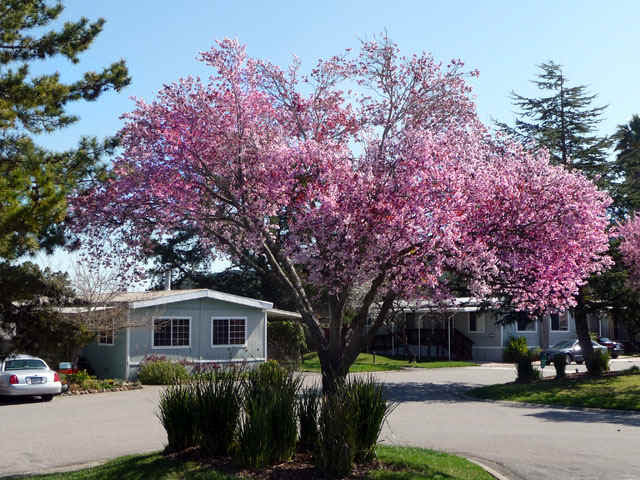 I kind of expected my mother to be...I don't know...sicker than she looked.  But she looked fine.  However, when she moved her left arm, she was obviously in pain.  We had lunch and then drove into town to go to the doctor.

It wasn't until the doctor arrived that I found out that the pain actually started three days ago.  But then she also told the doctor that she walks around her mobile home complex for exercises, when she told me she could barely make it across the street to pay her rent.  With her memory sometimes good, sometimes not good, it's hard to know what is the truth of anything
.
But the best thing is that there is nothing wrong with her heart, but she has rotator cuff tendinitis.  The doctor said that most people wait a couple of weeks before coming in, and that because we came in at the start of the problem it could be treated with Tylenol, instead of a cortisone injection (she was happy about that).   She sent her home with the same set of shoulder exercises that I had when I dislocated my shoulder.

We figured out that the "dizziness and weakness" just might possibly be due to the fact that she keeps forgetting to eat (gee...ya think?).   I've decided that I'm going to call her every morning to ask if she's had breakfast yet.  (Of course she could be eating just fine and forgetting that she ate, but her appetite has diminished so much it's easy to believe she is just forgetting to eat).

So that's how I spent my day.  I don't know who worked my shift at the book store, but they are so nice about having to replace me at the last minute.

Rotator cuff injury can keep you awake at night with it constant throbbing. She may be pretty tired an cranky.
Us old people enjoy our crankiness. I miss andy Rooney. My idol.

I hope your mom has a speedy recovery!

Hope your mom gets some pain relief soon.

Is that a redbud tree at her park? It's gorgeous!