Before I prove myself an ugly American and make fun of someone from China attempting to communicate in English, let me say that I have the utmost admiration for anyone from any foreign country attempting to communicate in this crazy language.  I speak English just fine, and a smattering of French and Portuguese, but no more than a few words now.  Other than "thank you" I don't know a single word in Chinese.  Put me in a foreign environment and I would be totally lost.  However, it does not prevent me from having a little fun with instructions written in China for gadgets to be used by Americans.

Yesterday I came across reference to some sort of ultrasound gadget that would prevent your dog from barking.  I did a little research on Amazon and found there are lots of them.  I also found I had some cash in my Amazon account and I could use part of it to buy the cheapest of these gadgets, so if it didn't work, I wouldn't really be out any money. 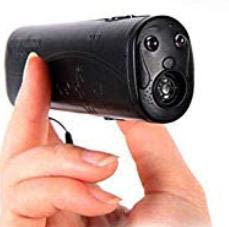 The instructions are labeled "How to telecontrol ypur [sic] Lovely Dog" and begin:  Dog is a loyal friend of people.  It has a long history to feed, train and ues [sic] dog since original society.

There follows a lengthy list of accolades about how wonderful dogs are, then lets us know that "Dog's lofty abilities are relevant to scientific and patient training from people....On the basis of traditional training methods are some mysterious tips of advanced ultrasonic, which are executed by "cute dog."  Such a small machine can offer you twice the result with the half effort."

While this is supposed to be an anti-bark device, it doesn't mention barking, but does tell you about "Defecating at ordered places":  At the beginning of coming to your family it may defecate where it think convenient and ignore your frequent clear up.  Just because it is a dog, your lovely dog, you never would like to be anar [sic] with its acting up.  In generally dog always defecate after it eat enough or get up at early orning or long soeep.  at this time you can take some of the excretion to the place you order for it at washing room.  Take it there. Once it start to smell on ot then close the door.  make it smell where you set excretion until it finish here.  Then you can clap its head about its neck. Praise its clever but love sound."

And so it goes for four pages,  But nothing about barking.  I'll close by again saying kudos to whoever wrote these instructions, which have made me giggle throughout  I certainly could not give the same instructions them in Chinese!

HOWEVER, Caroline and her fiancé returned last night and as Polly set up her barking, I pushed the button on the "cute dog" and she stopped immediately, looking at me perplexed.  And I only had to push the button once more time during the evening.  She didn't even bark when very tall Tim, who is a stranger to her, stood up.  I am very encouraged.  It may be the best $0.00 I ever spent!

They seem to have had an enjoyable week, visiting the wine country (where Caroline went back to the Vincent Arroyo winery she liked so much last time...and bought me a bottle of balsamic vinegar, which I asked her to do, as I was almost out of the bottle I bought there before).

They spent several days at Tahoe but sadly it rained while they were there.  Still, Caroline was able to get in a couple of hiking days.  They also explored what they described as the grossest thrift store (where you could buy a spider-web covered half bowl of popcorn, with the butter dried on it!  But it was only $1.  Such a deal!)  She was pleased with her discovery of the dollar t-shirt bin where she picked up four shirts, one of which for a friend with whom she exchanges terrible t-shirts.  She was very tickled with this one. 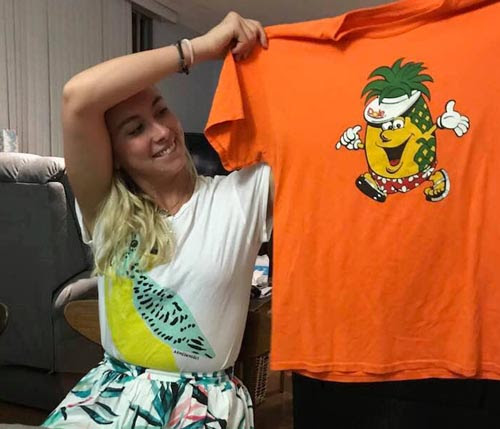 We enjoyed visiting with them.  Today they are fixing brunch for us and then going on the grand tour of Davis before going back to San Francisco this afternoon.  They fly back to London tomorrow.  It certainly has been a delight having her back again, however briefly and very nice to meet Tim.
Posted by Bev Sykes at 10:32 AM