Back in the Saddle

I got back in the saddle this weekend, reviewing not one, but two productions, both inense, both wonderful.  Sadly, Walt was unable to attend either, but I rode with my colleague, Jeff.

The first was a play called Sweat which takes place in Reading, I assume Pennsylvania which was, in 2000 the poorest town in America, though it does not appear on any chart for poor towns in America that I can find in 2018.

It is a textile town and many in the cast have worked for the local factory for decades.  The action takes place in a bar, which is run by my favorite Sacramento actor, Matt K. Miller.  Five factory workers drink here every night, much like a Cheers bar, but less cheery.   There is also a janitor from Columbia.

One of the characters get the opportunity for promotion and the promotion sets in place an incredible amount of anger, as the plant begin to fire people and move the work to Mexico.

The story is told in flashback by two characters who have just been released from jail and it takes the whole play to find out why they were arrested.

The various scenes are interspersed with TV clips which describe the times in which the next scene is to be set.  I was surprised to learn that under Clinton the unemployment rate was only 4%, not what Trump has been touting.

There is a lot of "adult language" and a lot of physical action, but I had worried that since I had NO sleep the night before and was unable to nap  that I would have difficulty staying awake, without Walt to keep poking me.  However, there was absolutely no way I would sleep through this play.  It was disturbing, but riveting. 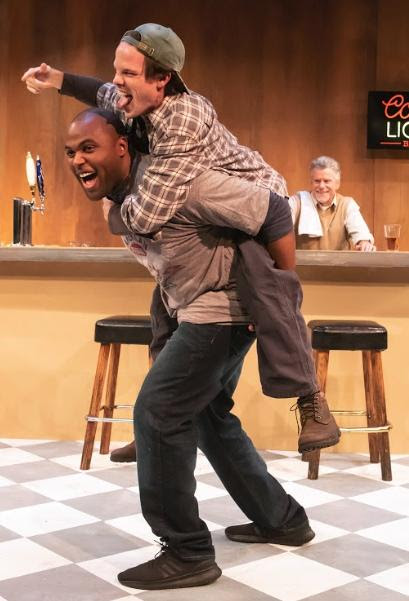 The second play was quite different, but no less riveting.  It is based on the true story of Germany's leading stage actress, Meta Wolff who is banned when it is discovered that she is Jewish.  She lives with her husband, also an actor, but an Aryan.

This is a two-person play and we watch Meta, the actress, slide into depression and recover a bit by directing her husband (in secret) to play Hamlet as a satire, dressed in Nazi uniform.

The situation eventually destroys them both, as the Nazi brutality increases and Meta's depression worsens.  She was raised Protestant and never even thought about being a Jew.  ("I never knew I could hate until now.") 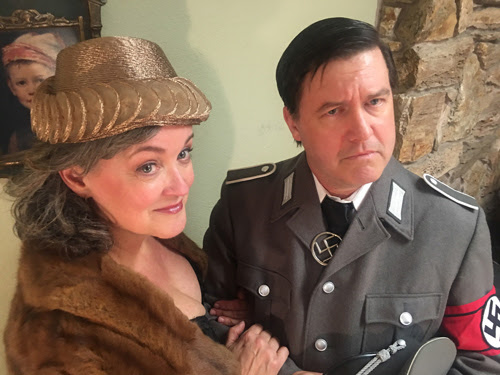 Both plays were written in the early 2000s, long before #45 considered a run for the presidency, and it's amazing how applicable they are to situations today, one the economics of the lower class when all the money is going to the very rich, the other in the rise to power of "a little man who gets into power and then decides never to leave."
Posted by Bev Sykes at 10:50 AM

Email ThisBlogThis!Share to TwitterShare to FacebookShare to Pinterest
Labels: criticing