Emotions can be high or low or "blah" and I think I experienced all three today.

It's never a good day when you wake up crying.  Well, I was't crying when I woke up, but watching the coverage from Pittsburgh made me so sad.

I went from sad to mad watching Trump's reaction to it all, excusing his going to a rally that night because "we have so much fun at these things," and explaining that the Stock Market had not closed after 9/11 (wrong--it closed for 7 days), and the World Series didn't stop (wrong--it postponed its next game for a week).  He joked that he almost called it off because he had abad hair day, but the slaughter of 11 elderly Jews was not enough to make him think twice about "having fun" at a rally.
He read a speech about toning down rhetoric and then went on to make fun of Maxine Waters again ("but I'll be nice...") and grinned at the now traditional "lock her up" chants.

Over and over again, I was brought to tears by some news report or especially by interviews with survivors. 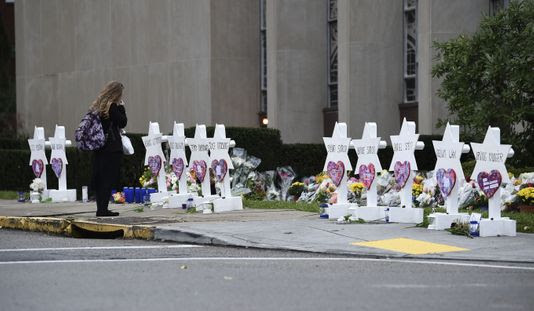 Ned stopped by after his doctor's appointment, which is in the complex where I used to work.  We had a catch-up visit and he did some tree pruning and helped with a minor computer problem for me.  We made arrangements to visit my mother on Wednesday.

After Ned left, the emotion became angry when I heard that, despite being asked NOT to come, the President is going to Pittsburgh today, the day people are burying their dead and the mayor has said he does not have enough manpower to protect the families and the president.  I'm wondering how he's going to make a campaign issue out of this visit because you know darn good and well that he's not going to comfort anybody.

Then there are the immigrants.  Oh  Pardon me.  The "invaders" marching from Central America.  Now he's sending 5,000 troops to a border where there are already more than 2000 guards. what are they going to do--shoot people? He's sending them this week, but the marchers aren't expected to arrive for at least a week. But that would be after the mid-terms and he couldn't make political hay out of sending troops if he waited until the "invaders" actually arrived in Mexico. Oh but I hear that if they actually GET here, the democrats are going to give them all cars. Pulleeze.

Now not only does the crowd consist of members of ISIS and MI3 but gangs, "bad people," mostly big strong men, and even people who want to spread small pox, TB and leprosy. Leprosy ??? What other thing can be made up about poor people fleeing violence in their countries and seeking safety somewhere else.

The afternoon emotion was mostly blah because I turned off the news and didn't even watch NCIS, but made preparations for dinner.  (I'd forgotten how much I like carrot and raisin salad)
Then there was the joyous emotion of evening TV.  There was a 15th anniversary special of Wicked hosted by Kristin Chenoweth and Idina Menzel, which was in a small theater packed with Wicked fans dressed in Oz costumes. 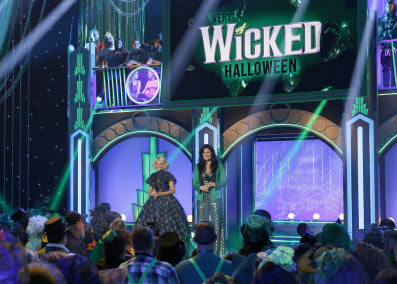 The show was an hour and had excerpts from the show, including Galinda's "Popular" and Elphaba's "Defying Gravity."  The finale brought all the Galindas and Elphabas from Broadway on stage to sing "For Good," my favorite song from the show.

They also had trivia....like did you know (or care?) that they used 400 pounds of dry ice at every performance.  There was also discussion about Elphaba's costume, which was apparently made of lots of different fabrics (and is now in the Smithsonian) but I forget the exact specifics about it.
The evening ended on a sad emotional note when Brian Williams reported on the support of the Pittsburgh Jewish community by the Muslim community, who set up a Go Fund Me account and also offered any support they might need, including standing guard outside the synagogue, if they needed it.

That's what we need more of -- disparate communities coming together, not tearing each other apart verbally or physically.

And I'm hoping the President has a bad hair day before getting on Air Force 1. 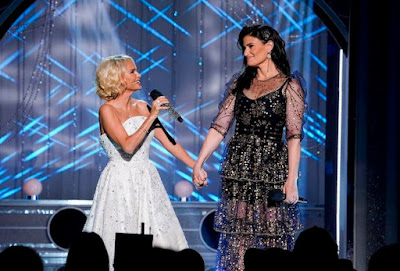 Email ThisBlogThis!Share to TwitterShare to FacebookShare to Pinterest
Labels: emotions