Ned was here in the morning to mow the grass and then to go to Home Depot to buy some stuff for the house.  Walt decided to go in a separate car so Ned could head home from Home Depot instead of driving all the way back to Davis.  Walt was very proud of himself that not only did he go to Home Depot but also made a quick stop at Costco too (he bought probably the LEAST amount of thing at Costco as anybody!)

Caroline seems to have had a better day today.  She texted in the afternoon that she would be late, which worked fine because I had planned a slow cooker meal which could stand for a long time and still be hot and fresh when she got home.

I made chili and discovered too late that we were out of onions (which is not a problem for Walt) so I just chopped a lot of garlic and then 3 hours into the cooking, I remembered that I usually add a can of green chilies, so I added that late, but it will had 3 hours to cook, so that worked all right.

We waited till 9 and then ate.  I had been a little too liberal with the chili so I baked biscuits to eat to tame the fire in the mouth, and that worked well.

Caroline got home some time after 9:30.  They had a emergency -- a Great Dane with heart problems -- that had kept her.  She also stopped at the store on the way home.  She had planned to make shortbread last night and asked if I had "corn flour."  I didn't know what that is (turns out it's cornstarch). 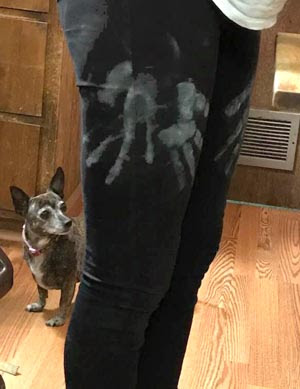 Then I couldn't find the sugar.  I haven't a clue where it is.  That's one of the problems with not being in charge of the kitchen any more.  I am not aware of what we are short of and have to try to figure out what needs to be purchased at the store.  One of these days I'm going to have to break down and actually go to the store instead of sending Walt or Ned.

But Caroline decided to go with brown sugar instead of white and got the dough all mixed.  As you can see, she really got into her work!  (She was making the recipe from Paul Hollywood, of the Great British Baking Show)

The nice thing about having her work in the kitchen is watching Polly, who stops barking and watches the activity on the kitchen counters very carefully, hoping for a handout (which Caroline is not liable to do, being a vet and considering Polly a "sausage" already") 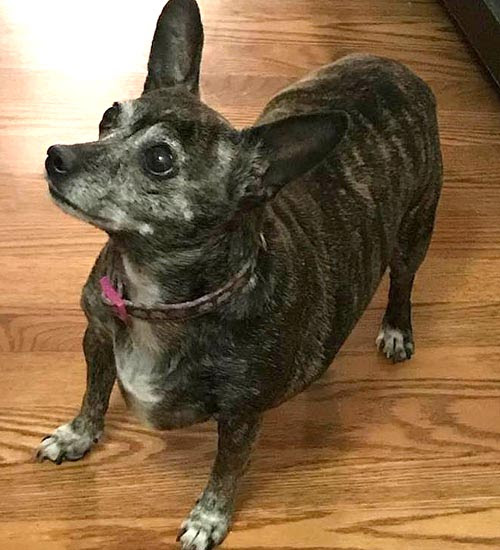 She got the cookies all cut, baked and then the tips dipped in chocolate, all under Polly's watchful eye. 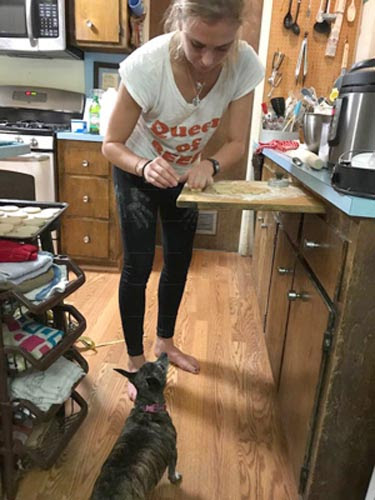 She finally had some chili for dinner and then, when the cookies were finished, headed off to bed.  I'm glad it was a better day for her -- and definitely glad she got shortbread made! 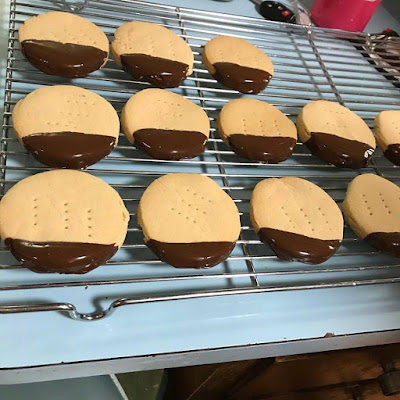