So while all the country is concerned with Hurricane Florence and its potential destruction in the Carolinas, our president is busy trying to convince us that the 3000 number of deaths in Puerto Rico is just a plot by the dems to discredit the "incredible job" he did on the island.  There should only be a few more than the 67 that he heard when he visited there right after the storm.

In the meantime, with hurricane season starting to get in full swing, he has taken $9 million from FEMA and $20 million from the Coast Guard -- the two most important entities after a hurricane -- to give it to ICE so they can build more barbed wire detention facilities so he can arrest more children.  I hope those of you who are still Trump supporters are happy with yourselves.

I should have written that last instead of first because I'm so angry, I'm now shaking from the frustration of it all.

My sister died 47 years ago today, after lying in a coma (maybe brain dead?) for 7 weeks.  She had been shot by her partner, who first said that she (the partner) had decided to commit suicide and Karen tried to take the gun from her and in the process the gun went off accidentally.

Even someone like me, with all of my knowledge from crime dramas, can figure that shots to her chest and head would not result in a struggle over the gun, but it took her several days before she finally admitted that they had argued and Bernie had shot her.  People ask me what happened to Bernie and all I know was that she spent a year in a medical health facility to assess her ability to handle prison, but I don't know what happened after that.  My mother said she had never seen anyone so devastated by anything as she was.

Karen and I were 4-1/2 years apart (Bri and Lacie are 3-1/2 years apart) and were never close.  She was sports and tailored clothing; I was frills and girly stuff.  I was jealous whenever she decided she liked something I did (like Judy Garland, for example...when I started a scrapbook, she did too.  I was not very nice about it.) 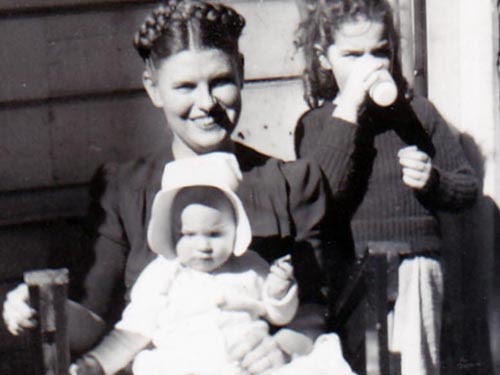 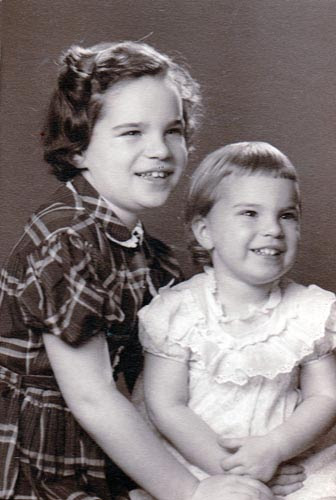 I'm sure we did things together, but today I don't remember them.  The only "uniting" things we had between us was our fear of our father and our frustrations with his mother ("Hon, like a good girl would you...") 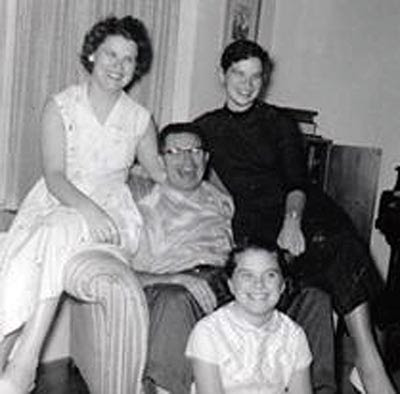 When I went to high school, I chose the smallest Catholic high school in the city because I was shy and it seemed more "safe" for me.  It  was and I excelled during my four years there.
When Karen chose a school, she chose one of the larger school because she didn't want to compete with my "reputation"

In her senior year, she fell in love with a woman and became very secretive.  My mother thought she broke the relationship up, but when Karen moved to her own apartment with a "roommate" she made up a name and the woman was the same one she met in high school. She separated herself from the family for a long time, until she finally admitted who her roommate was. (These were the days before PFLAG and my parents agonized over "what they had done.")

The roommate eventually broke Karen's heart and she found another partner, Bernie, whom we all loved for bringing Karen back into the family.  But they had their disagreements and Karen finally found another place to live. Bernie, angry, shot her.

Her death became my father's great sorrow and nobody else could share it.  My mother was afraid to cry around him.  He became obsessed with proving Berne's guilt and his anger was kind of the straw that broke the camel's back of my parents' marriage.

That seems like a whole lifetime ago and I truly have never felt great sorrow about her death, other than how much it hurt my mother.  But I do admit that in these Alzheimers years (and in the years when my parents' marriage was falling apart), I am sometimes angry with her for being safely 6 feet under.

Email ThisBlogThis!Share to TwitterShare to FacebookShare to Pinterest
Labels: Karen