Me and Father Joe 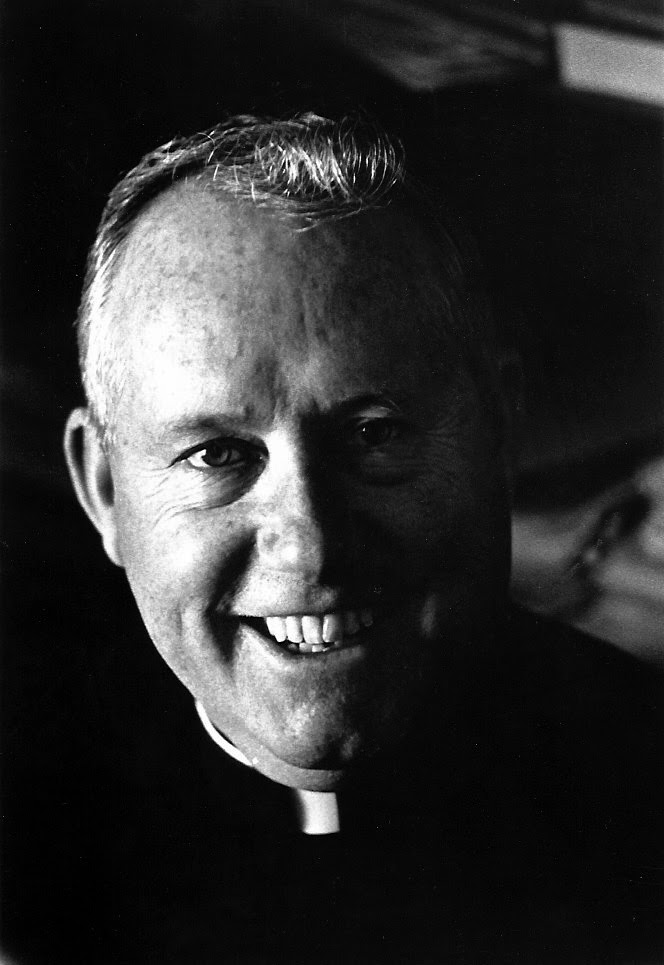 His name was Martin Joseph O'Looney, a Paulist priest. We met him back in 1953, when my mother decided to become a Catholic.

I'm not sure how she happened to choose Old St. Mary's church for instructions, as it was not our local parish, but she went to OSM and took instruction from Fr. Joe.
The church was in Chinatown, across the street from a park, so she would leave Karen and me in the park (boy, you sure wouldn't do that today) and meet with Fr. Joe for an hour in the rectory and then pick us up.

I don't remember the first time we met him.  I was 10, Karen was 6.  He took one look at cute little Karen and thought she was greatest thing since sliced bread.  Fat me?  I was chopped liver.  That kind of defined our relationship my whole life.

He baptised my mother and attended the dinner my godmother threw for her, coming dressed in his priestly collar (he hated wearing it, but realized my godmother was very prim and proper).  The only thing I remember about that dinner was Joe and Karen huddled together laughing about putting olives on their fingers. I think my godmother was scandalized.

My parents became an active part of his social group.  They met frequently for parties, often at our house.  The group loved to sing and Fr. Joe had a gorgeous voice and I loved to lie in bed and listen to the laughter and music going on in the living room.  I think of him whenever I hear "There's a long, long trail a-winding," which can't possibly be sung without harmony.

We enjoyed getting together with his sister and her family and we occasionally vacationed together, along with Fr. Joe.  Karen and I and her kids put on terrible plays that we charged the adults to come and watch. 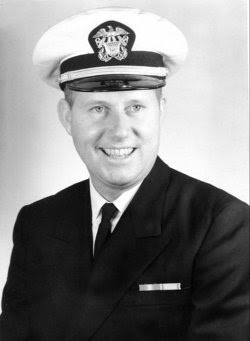 When I was in high school, he joined the Navy and served on the USS Kearsarge, an air craft carrier.  Whenever the ship hit San Francisco, he would come by our house to visit.

I remember when he had been in Japan and brought my mother a beautiful set of Noritaki china.  Though I had no emotional attachment to it, it was sad to give it away when we moved my mother to Atria.

When he left the Navy, he came to the Newman Center at Berkeley, where he spent several years.  When he arrived, I was the only person he knew so I became the person responsible for everything he found wrong about the center.

But everyone loved him,  He had that Irish personality, a twinkle in his eye and a taste for fun.  He also was dedicated to his special causes.  He founded "Amigos Anonymous" during his Newman apostolate in Berkeley. For eight years in the 1960's, groups of dedicated college students of all faiths from various colleges spent their summers in Central Mexico working with the poor. Their projects varied widely—starting an elementary school, organizing a renters' association, conducting vaccination programs, coaching kids in basketball, forming discussion groups, etc. The spirit of service continued through the Amigos Anonymous Scholarship Program in a small town in the state of Guanajuato where the Amigos originally worked. The program supports students whose families are too poor to send them to school. It was still in operation at the time of Joe's death.

He always wanted me to be involved, but I resisted.  (It took several years after his death (at 88) in 2006 when I was finally able to get off of their mailing list)

When my sister died, he presided at her funeral, but I have no memory of that.

He and I butted heads over two funerals.  For my father's funeral, I wanted there to be a recording of my father playing a couple of his compositions on the piano in the background as exit music, but he stopped everything and said that Beverly wanted everyone to hear these and made everyone sit there and listen to the music before he dismissed us.  It was a small thing, but indicative of how he never listened to me.

When David died, I reluctantly asked him to do the service and he said that since David had died while driving drunk he wanted to give the kids in the audience a lecture on safe driving.  I asked him not to do it.  He did anyway.  Jeri didn't want to play the clarinet for the service, but he made her get up and do it.  And then when the service was over, he was angry with me because I expected him to go to the cemetery with us to do the graveside services.  He had a party to go to.  But my mother got him to go and he reluctantly did.  When Paul died, I did NOT want him anywhere near the service (our friend David Gerrold, who had a mail-in minister's license did it beautifully and my friend Olivia spent the whole afternoon blocking Joe from getting near me!)

When my mother left my father, after 35 years of marriage, to marry Fred, Father Joe offered to get her an annulment of her marriage to my father based on the conditions of their marriage.  She declined and just lived in sin for the next 18 years.

As he got older, he sort of moved away from a parish and lived with his sister and her family (her husband became my father's best friend). He had dinner with my mother a couple of times a week.  He showed up with a bag of food for her to cook for him, and sat there drinking while she did.  On more than one occasion, she feared for his safety when he got into a car, but she never said anything.  He eventually moved into a rest home near her house.  He had lost the ability to communicate when he finally died, which is a shame because communication was his strongest skill.

He was most noted for the very long letters he would send out at Christmas commenting, from a very liberal perspective, on affairs of Church and state and especially on social justice concerns. In 1993, for example, he wrote: "As once more this itinerant hermit takes pen in hand to assemble this annual Christmas epistle ‘to the scattered troops', there comes the temptation to cop out. Last year's long-winded document was received with general approval. Even my right-wing critical correspondents conceded that it was my best and suggested that ‘I quit when I'm ahead.' I'll resist the temptation. It has been a busy and confusing year. Etc, etc"  (I copied that from his obituary)

We received copies of his old Christmas sermons for years after he died, and I'm glad they have finally stopped coming.

He was a very big presence throughout my whole life, yet I have no emotional feelings about him whatsoever.  Kind of like my father.
Posted by Bev Sykes at 4:09 PM