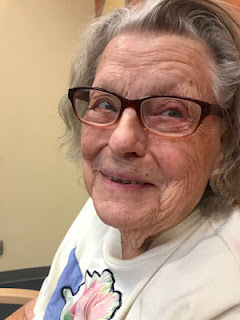 I noticed that my mother was wearing glasses when they wheeled her out to the car for her annual medical exam.

Of course they weren't her glasses, and I don't know whether they do anything, pro or con, for her vision, but she was happy to have "her" glasses on.  I also notice that her eyes, which have been red lately as she rubs them, seem to be fine now, so who am I to complain?  At least she was wearing her own clothes this time.

She didn't know where she was going....or why....despite several explanations, but what else is new?

Going into the exam room was silly, since Anne, Dr. Akanda's nurse was helping my mother while I was struggling to get out of the chair I was sitting in (Walt finally helped me).

We had our pre-exam meeting with Anne who then gave my mother a gown to put on, which she couldn't understand at all.  As Anne was leaving the room, she was struggling to get the gown over her shirt.  I stopped her and told her she had to take her shirt off first, but that was too complicated for her to process and she continued to put it on over her shirt.  I started to get to my feet to help her, but my knees wouldn't work.

Talk about the blind leading the blind!

We did finally get the shirt off and the gown on (though with how little "hands-on" the exam was, it really was unnecessary).  And now the annual exam for her 99th year has taken place.  Next time she has an annual exam it will be just before her 100th birthday.  The sad thing about that was how excited she was for several years at the prospect of making it to 100 and now it doesn't even rate a blip on her awareness meter.  If you tell her she's about to be 100, she just says she refuses to be that old.

You can tell how much her ability to read has been compromised by her Alzheimers.  There was a brochure across from where she was sitting.  It said "Everyone deserves a safe relationship."  She struggled to read "everyone deserves a safe..." but "relationship" was too long a word for her to read.  Sigh...this is the woman who was an avid reader all of her life and was proud of reading two newspapers, back to back, every morning.  :(

I'd like to say that it was an otherwise quiet afternoon, but it was anything but.  There was a point where I was sure that there was going to be a hammer smashing  through the wall of my office.  And Walt had to remove things from the walls for fear of them being knocked off.  We are having the siding replaced on the house and, ultimately, the house repainted.

There was so much pounding and other noises that even Polly decided it was useless to bark and just fell asleep.

But there was much productivity going on and they got a good start on the house. 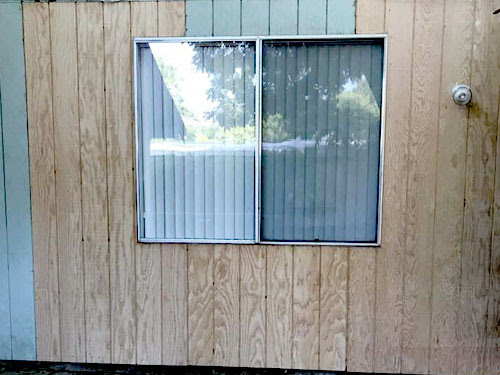 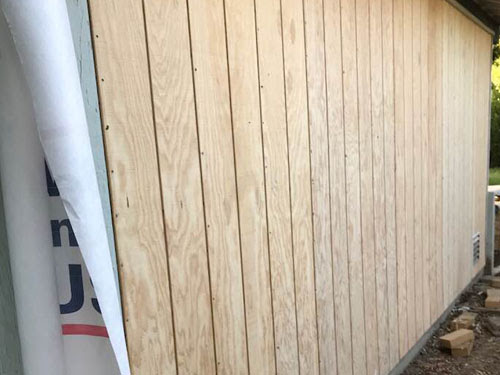 When they are finished it will be like having a whole new house, but there is much more pounding to go before the job is completed.