History, Recent and Long Past

Be still my heart.

The sore on my butt is getting better.  It still hurts, but it's no longer excruciating.  I still can't get into a prone position, but I did some pretty good sleeping last night sitting up and it actually felt good.
If it's Monday, Ned is here.  We have hired him to work 3 days a week, helping do all the things that need doing around here.  He's the white tornado and just what we need, whether we want it or not!

Today he pulled out a box of scrapbooks for me to go through.  Sigh. Scrapbooks.  The bane of my existence.  We have dozens of them.  Maybe hundreds of them.  My scrapbooks (from my childhood), our scrapbooks (raising kids), and more recent scrapbooks (fortunately, digital photography has now moved "books" to the internet).

But in addition to our books, there are Walt's mother's scrapbooks and my mother's scrapbooks and my  father's scrapbooks, plus a few that belonged to my godfather, who was my grandfather's brother!.  Photo albums, mostly.  And what to do with those.  It's easy to get rid of  the books that are filled with pictures of people I don't know (nor does my mother any more), but what do I do with the pictures from my mother's 90th birthday party, for example? And how about all the clippings from my grandfather's years in showbiz, my godfather's years as a champion 6-day bicycle racer, and their brother's career in boxing??

And how about this lone photo, stuck in the back of a book of pictures from our wedding, which belonged to my father. 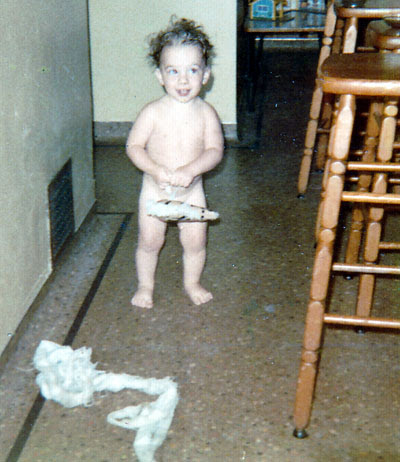 The thing that fell out of a book I picked up was a history of my grandmother's side of the family.  Peach had done extensive research on our grandfather's ancestors but I don't know how much she uncovered about our grandmother's.  Some of this I knew, some I did not.

We can trace our history back to the reign of David I (1024-1153) of Scotland.  Ivan Kilpatrick witnessed a charter of Robert Bruce. The crest of the Kilpatrick coat of arms is a hand holding a dagger, distilling drops of blood and the motto is "I mak sikar" ("I make sure") 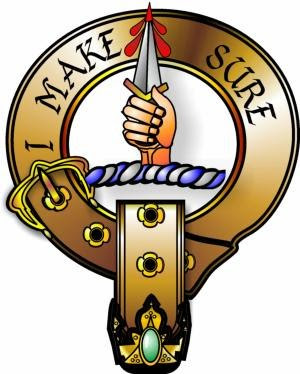 This was derived from the famous 1306 murder of John ("Red") Comyn by Robert Bruce in the Gray Friars Church, Dunfries, Scotland.  As Bruce left the church, he asked his friend and follower, Sir Roger Kilpatrick, if Comyn was really dead; whereupon, Kilpatrick said, "I mak sikar" and went back and stabbed Comyn again and again until he was certainly dead.

So don't mess with me, you guys  I come from fierce stock!

When James I took the English throne in the first quarter of the 17th century, he began transporting Scotsmen to the colonies, for failure to pay tithes to the established church.  The first record of one of our relatives is in 1756 in Rowan County North Carolina.  He was married in 1772 and they had 11 children.

Andrew was a soldier in the Revolution.  He was an ensign in the first Regiment of Rowan Militia under Col. Griffith Rutherford.  There is a family story handed down that he was wounded in the shoulder in a Revolutionary battle.

At the time Peach wrote this (1996) she had tons of information to go through and planned to speak with Elroy Kirkpatrick (age unknown), but he had had 3 heart attacks and 3 strokes and I don't now if he lived long enough to speak with her. 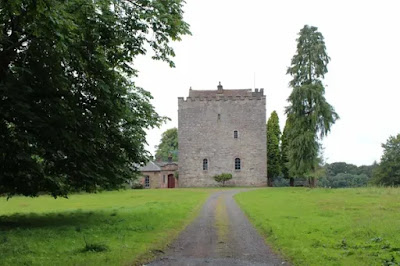