I had a craving for carrots yesterday.

I crave donuts, or pancakes, or freshly baked bread, or any sort of pastry, but not -- carrots.

I could eat, and did enjoy, buttered cooked carrots (the operative word being "buttered," of course!) but it was years and years before I was able to swallow raw carrots.

I did, in time, learn to eat raw carrots and especially liked carrot-raisin salad.  Why I suddenly had a craving for it yesterday, I don't have a clue, but I knew we had a big bag of carrots in the refrigerator and so I got them out and made myself a big batch of salad.

I shredded a bunch of carrots, added a handful of golden raisins and then, as a last idea, also shredded up an apple that was starting to look tired.  Then I added a bit of mayonnaise and some orange juice and mixed the whole thing up.

The thing about carrot-raisin salad is that you can't eat it right away.  It has to sit long enough to let the flavors blend.  But within an hour, I had a small bowl and it was just what I had been craving.  I had so much left over that we had it for dinner last night and I finished off the bowl.  Craving satisfied!

I heard this morning that it was the 35th anniversary of the big earthquake.  I immediately thought it was of the Loma Prieta quake, which hit the Bay Area hard and since I am San Francisco centric, I didn't realize it was the anniversary of the Coalinga quake in Southern California.  The Loma Prieta quake happened in October of 1989, which is not to dismiss Coalinga, but I didn't have that experience and the report of the anniversary set me to remembering that terrible day in October.
I was working for The Typing Company, which was in an upstairs office in Davis and suddenly we felt a little jolt.  I knew that if we were feeling a jolt, it must have been a big one in the San Francisco area.

Walt was working in DC, Ned was living with Marta and working at a video store in Oakland, Tom and David were at the World Series game in San Francisco, Jeri was working in South San Francisco and only Paul was here in town.  I immediately called Marta and found out that yes, it was a big one but she and Ned were fine.

I left work right away, worried about what happened to all those people at the ball game but by the time I got to the car they were reporting no serious problems at the game, so I wasn't worried about the kids.

But the earthquake happened at the time Jeri would be driving home from work, from South San Francisco across the bridge to the east bay and there was a report that part of the Bay Bridge had collapsed (but no details about how bad it was...not as bad, as it turned out, as I feared) 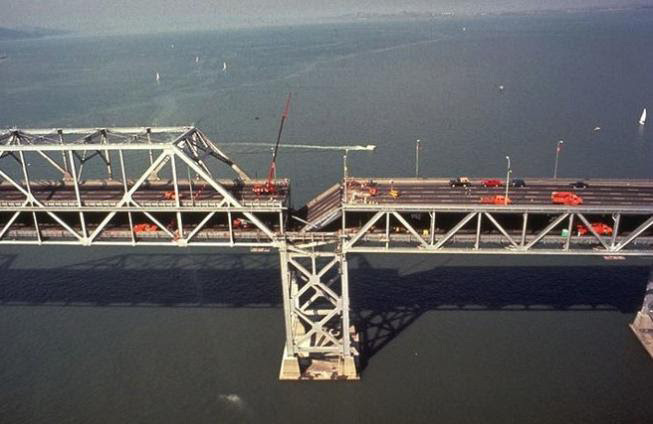 I finally heard from Tom and David, who had gone home with Walt's brother and his wife and would stay in with them that night.

It was 10 p.m. before I heard from Jeri.  The Bay Bridge is built in two sections which meet at a tunnel on Treasure island, which was built for the International Exposition in 1939 (where, coincidentally, my father met my aunt, who introduced him to my mother).  After the exposition, it became a military base and though the base closed in 1991, it was still an active military base in 1989. 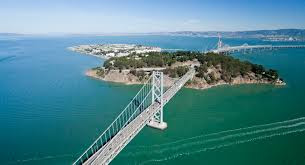 The collapse had taken place on the far side of the island, so you could not get from San Francisco to the east bay.  They had to take all of the cars, lined up bumper to bumper across the bridge, off at Treasure island, where they could turn around and head back to San Francisco.  It took hours.  Jeri called in tears from a pay phone.  She was alone in the city and didn't know where to go.  All the lights in the city were out.  I thought of a friend she could stay with and gave her the phone number.  She was able to find the house and spent the night but it was a bad night for her, and so hard for me to be in Davis with almost my entire family scattered across the country and unable to do much to help any of them.

You realize how helpless you are in moments like that.  I felt like a mother hen whose chicks had all scattered and I couldn't get to them.
Posted by Bev Sykes at 11:40 AM

I remember that earthquake. I was on the second floor of a lab building at UCDavis. I felt a bit of shaking, thought Hmm, an earthquake, and continued with my work. Everyone else ran outside.But, I grew up in CA, and when we were children, my brothers and I thought earthquakes were great fun. Of course, we were never near the epicenter of a serious quake.
Arlene