1.  David was the kid who was nearly born at home.  My labor went so quickly, that we had to leave 6 year old Jeri to babysit for the others because Char, who only lived 5 minutes away, hadn't arrived yet.  To this day she says she will always remember the look on my face as the car hit a bump backing out of the driveway as she was arriving and a contraction hit.  At the hospital I told them I was in transition and they poo poo'd me, then as soon as they examined me, rushed me to the delivery room.  I later told them "when a mother giving birth to her fifth child tells you she's in transition--believe her!!"  His was the first birth Walt was able to be in the delivery room for but the baby arrived so quickly, Walt was still getting gowned as he was born, but he was at least able to scratch my nose when it itched, since my hands were tied down. 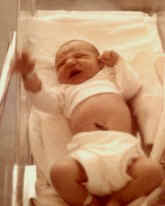 2.  He weighed 10 lbs and was the biggest baby in the nursery, since all the others were 6 lbs or less.  When they wheeled babies out to the viewing area for parents and relatives to ooh and ahh over, he looked like a 2 month old compared to those tiny newborns.

3.  He was a very solemn baby.  He had these big brown eyes and he always seemed to be taking everything in before making a commitment to anything.  You felt rewarded if you got a smile.  In truth, I had not been happy to be pregnant this time.  I had such a special relationship with Tom and was sad that was going to change.  I loved him, of course, but it was "different."  One day I was on the phone and David, about 6 months old, was bouncing up and down in his "bouncy chair."  I looked at him and have gave me this dazzling smile and I realized with a start that I had fallen in love with this baby.

4.  My favorite David baby memory was when he was about 15 months old and toddling about.  I was sitting on the grass in front of our house in Oakland watching him play with the others a bit farther down the street.  Suddenly he saw me, stretched his arms out and ran up the street, throwing himself in my lap.  I get all warm every time I remember that.

5.  He was such a smart kid, and so terribly un-motivated.  He is one of those "what ifs' I talked about yesterday.  In grammar school they wanted to put him in the new Gifted and Talented class, but it would mean he would attend a different school and he was reluctant to leave his best friend.  We left the decision up to him and ultimately he chose not to make the move.  And then the kids were put in separate classes anyway and the friendship cooled.  I often wondered if he had that extra stimulus in grammar school would he have worked harder in school?  He always got mediocre grades and the only reason he got into college was that he did so well on his SAT.  He goofed off so much in school that on graduation day, as we were getting into the car to go to the ceremony, he turned to me, with kind of a dazed look on his face, and asked "what now?" It just hit him that he'd blown his school years and did not have the grades for college, or any skills for a job.

6.  But everyone loved him and he would help anybody.  When Victor, a 20-something man from Zaire, was living with us, he spoke almost no English and struggled with the language.  Dave and his friend Jeff decided to teach him English.  Every day after school, the three of them got together and using toys and lots of laughter, they slowly taught him to speak English.  They had such a close relationship that Victor showed up at his funeral--I don't even know where he was living or how he found out David had died.

7.  He got a paper route a year or two before he was officially old enough to have one, but Paul had been hired and found out he hated it, so David started delivering papers until we finally admitted to the paper that it was David, not Paul who was doing the delivery.  Often I sat with him on the floor in the morning, helping him fold the newspapers and then drove him on his rounds (I did that on Sundays when the papers were so big and he was now delivering for two different papers).  There was one house that had a small tree, newly planted, that he would jump over every day.  I wondered how long he could do that before the tree got too tall.  I was sad, after he died, to discover that the tree had been cut down (this was a few years after David gave up delivering papers).

8.  We accompanied the high school Jazz Choir to New Orleans when they performed at a jazz festival (and won).  Dave's friend Jeff was a huge jazz fan and so, by default, was David.  The group met a street performer in the French Quarter and the three of them performed together.  This is my favorite photo of that trip. 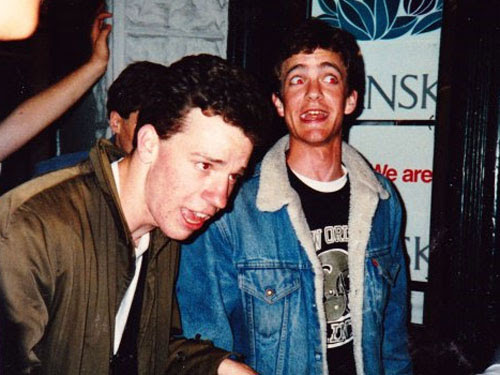 9.  He and Tom were  Lawsuit's biggest fans and as much as I enjoyed watching the band perform, I almost enjoyed more watching how much Tom and Dave loved the music.  The first concert after Dave's death was a very difficult one for everyone and in between sets we were all behind the scenes crying.

10.  He got into Chico State but I think partied more than he studied his first semester.  He was at a drinking party one night when a friend of his, also drinking, staggered out onto the railway tracks and was hit by a train. He was not killed, but in the hospital and Dave and a friend were making plans to rehabilitate him when he was ready to leave the hospital.  Then one night around 1 a.m. he called me in frantic tears.  The friend had died.  He had never realized that was a possibility.  He had a nervous breakdown and left school.  We had a very long talk when he came home, sitting in a darkened room.  He told me at that time that he felt his brain didn't work right and he also told me he thought he was not going to live long.

11. We got him into therapy and, after he did lots of research at the med center on anti depressants, he agreed to start on medication.  Within a very short time, he told me he felt his brain worked "right" for the very first time in his life.  He got his life back on track, started working at the local supermarket, where everyone loved him (everyone always loved him) and he was making plans to start UC Santa Cruz to study music.
12.  David gave good hugs and had a terrific smile. I've said before that I still hold the mental picture of the last time I saw him, on Mothers Day of 1996, standing in the hallway in his leather jacket, holding his arms out just like he did as a toddler, with a big smile on his face as he closed me in a bear hug and told me he'd see us when we returned from our trip to New York.  He died while we were in New York

13.  After his death. a friend of his told me some story I can't remember now but it concerned a white owl and how he always associated David with a white owl.  The night of his death, the friend had been driving and a white owl flew right past his car window.
Posted by Bev Sykes at 11:23 AM