Who orders salmon in a steakhouse?

When the invitation to the Sutter Davis Hospital volunteers Christmas luncheon came, I didn't think I was interested.  This is not the "come and let us treat you to lunch as a thank you" lunch (which comes about in the spring), this was the "pay big bucks and we can all eat together" lunch.  The idea of eating at Cattlemen's was pleasant.

It's a great steakhouse that I've been able to visit a couple of times.  They have fabulous beef and we almost never go there.  So that was something in its favor.

But there was that whole social anxiety thing that so often cripples me.  But in the end I decided to go.  I had enjoyed the free lunch last spring, though I was fairly new then and didn't really know anybody by name.  I had felt out of place, but enjoyed myself. 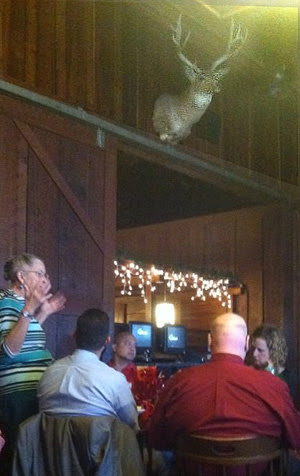 So I sent in my money and today was the day.  Of course, a good ol' steakhouse like this comes with the thing that I hate....dead animals on the wall.  But I decided not to look up.

We all gathered around the front table to sign in and then go find a seat.  People were meeting friends and going off to tables. I decided to sit at an empty table and see if anyone would sit with me.  I watched people I knew give me smiles before going off to a different table.

I expected that this entry was going to be a "poor me, nobody likes me" entry, but then a woman asked if the seats were taken and she and her friend (someone I actually knew) sat with me, then a woman who talks to me all the time when she passes the information desk arrived and then a woman who used to teach our kids in grammar school joined the group with a woman I didn't know but see all the time, and she always gives a cheery wave. So things were looking up.
I'm not sure why people order salmon at a beef restaurant, but there were only two of us who ordered the sirloin steak, which was delicious. 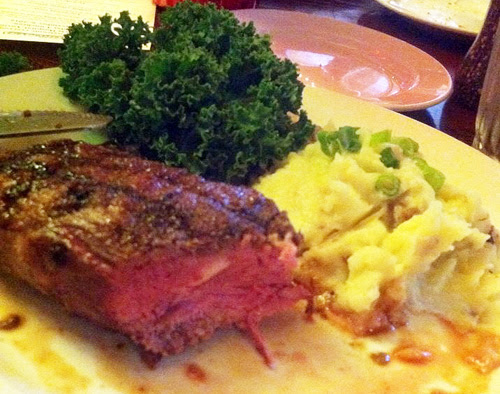 Three of the women at the table are gift shop buyers and so there was lots of talk about that, but then I remembered that the ex-teacher had just traveled to Africa.  I had seen some of her Facebook photos, and so I talked with her about that, the place I've always wanted to visit and know now that I never will.  I was feeling more comfortable.

Then one of the gift shop ladies, who talks to me whenever she passes by, asked me what was the last show I saw.  I told her about Cinderella, which we saw last weekend.  The woman next to me asked if I write things about shows. I told her that I was the critic for the Davis Enterprise and that was an a-ha moment for most of them.  It was like the time someone at a new theater asked if I was "The" Bev Sykes. Turns out they all read my stuff, which is quite humbling.

Suddenly we had mutual things to talk about.  They wanted to know how I got to be a critic, and the shows I'd seen lately.  It was about 5 minutes where I was in my element and my social anxiety melted away for the rest of lunch.  (When we were leaving one of the women said "we learned a lot about you today!")  I left feeling 100% better than I had felt standing awkwardly on the porch of the restaurant waiting to be let in. 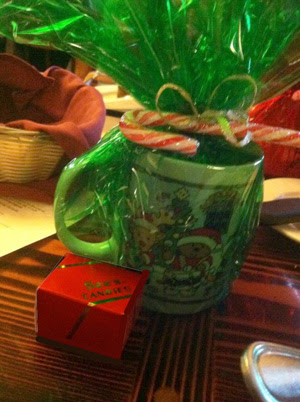 They gave us each a nice Christmas mug and someone from management gave each of us a teeny box with a piece of Sees candy in it.  Since lunch had not come with dessert, the candy was a nice end to the lunch.

As I got into the car, I was surprised to realize I had enjoyed myself, felt I had a better relationship with the women at my table and was feeling very good about the whole event.

I had to go from the restaurant to the hospital because I was working a half shift.  The lobby was nicely decorated and after talking with the gift shop buyers, I had to check out the things in the gift shop.  I was looking for a pair of Christmas earrings to replace the two pairs of earrings that I lost one earring from.  I got a cute pair of package bows. 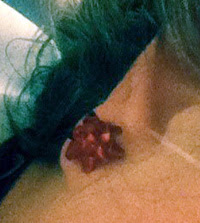 I won't be able to sleep in them, as I have the earrings I've been wearing for several years, because they are too lumpy, but they'll get me through the holidays and maybe then I can go looking for another pair of "forever earrings."

All in all a surprisingly pleasant day.
Posted by Bev Sykes at 12:00 AM

Glad you had such an unexpectedly good luncheon experience. I've been known to order salmon at a steakhouse. The only thing you can do to ruin fish is to overcook it - and one thing a steakhouse knows how to do extremely well is to cook meat/fish without overcooking it. Hence, ordering fish. (But it doesn't keep me from ordering steak from time to time.)