The Lights of Davis

The Davis Enterprise released names of the winners of the annual town house decorating contest.  As usual (and not at all surprisingly), the top prize went to my old boss, Derrick Bang, who used to be the entertainment editor of the Enterprise for many years, until he fell victim to a downsizing.

When Walt picked me up at Logos, it was dark and we decided to go out checking house lights ourselves....and it would give me a chance to test out the quality of the new cell phone camera.

We started with what this family calls Paul Plaza (Actually the E Street Plaza, but there is a performing center that is dedicated to Paul).  That's where we could see the official city tree (lit in blue).

The houses we found covered a wide range of topics.  There was the manger scene, with the house next door having a big snowman.... 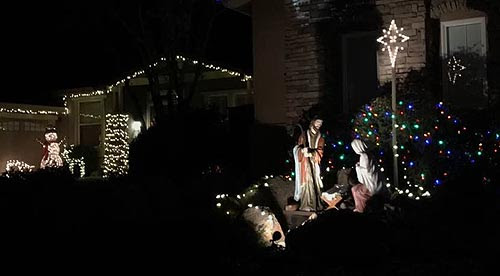 ...and then the house with a Star Wars theme, which had a storm trooper holding a candy cane on the lawn. 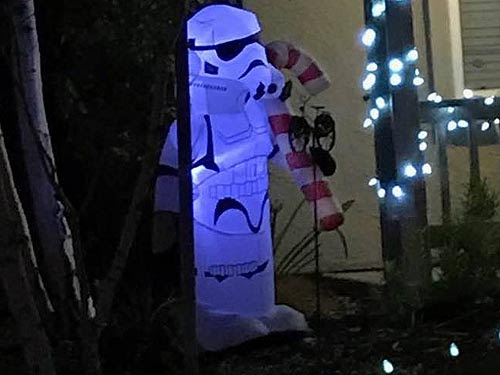 There was a time when we put lights up on our house, but we only had one string, so Walt kind of draped them across the bush in front and the kids decided it looked like it was spelling "nunu" (Mork and Mindy was big then).  We found a house that had a similar lighting arrangement.

But all pale when you get to Derrick's house 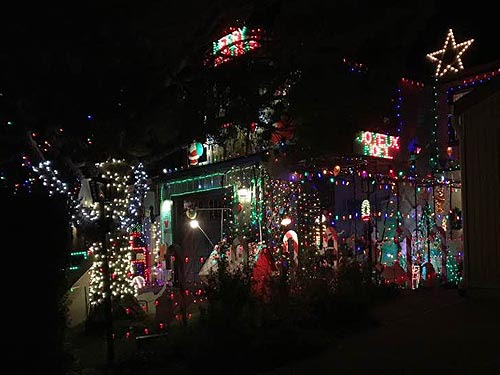 It's impossible to do this justice, but in addition to a light display that would do Clark Griswold proud, there are lots of Minions, Mickey and Minnie Mouses, and a ton of Snoopys.  In fact, you can even see Snoopy's house. 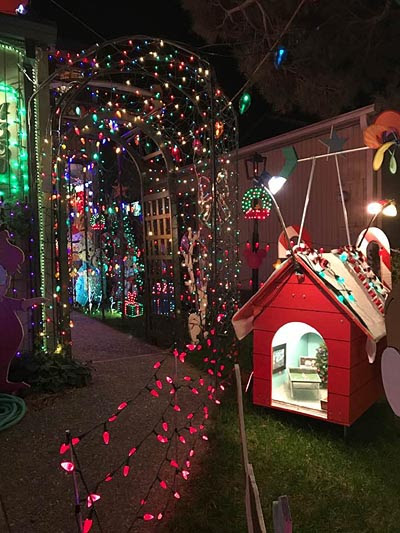 (Have you ever wondered what it looks like inside Snoopy's house?) 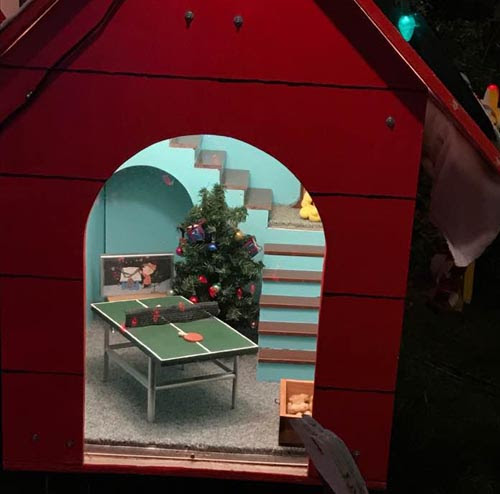 There is a train that runs around the periphery of the house (at the roof line) and he is hooked up to a radio signal so if you turn on the right station, you can hear his Christmas music for about a block in either direction of the house.  Twice a night there is a program (I saw it one year, but can't remember what it is) that runs a few minutes and then repeats two hours later. 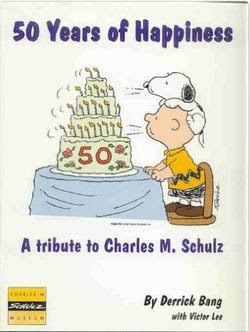 It's easy to see how this would be difficult to beat!  But I love watching it every year.  Inside the house is even more spectacular, minus the lights, but it starts with a floor to ceiling tree right inside the door that is decorated with nothing but Peanuts ornaments.  In the years when he was entertainment editor, he had a party each Christmas for the entertainment staff and one of the party games was to check the whole house and see how many Snoopys you could find (usually somewhere short of 100, including pictures, stuffed animals, ornaments, statues, etc.)

Derrick is the author of this and many other books about the Peanuts cartoons and Charles Schulz.  He was also part of the building and opening of the Charles Schulz museum in Sonoma. My big coup was that on the flight back from Australia in 2003, I was able to get a Qantas Snoopy (which they were giving to kids) which he did NOT have in his collection, though he has a gazillion stuffed Snoopys.

Now his house is infamous and it's my favorite thing to check out in this town each Christmas.
Posted by Bev Sykes at 12:00 AM