I had lunch with my friend Joan and Nancy today.  We lunch periodically when the political scene is overwhelming and we need to talk about it.  I realized today that we've been doing this for about 12 years.  This was easy to figure out because we were first Bashing Bush Babes, perhaps after Bush's re-election.  We met maybe once a month to let off steam.  We couldn't do this on a regular basis because Nancy's schedule is so crazy and she is often out of town.

For the last 8 years we haven't really had that much to complain about, so we haven't lunched together to talk politics in a long time but things ramped up during the campaign and now things are taking a more serious turn as we face the upcoming inauguration. Maybe we are now the "Dump Trump Dames."

It's always such a wonderful catharsis to spend time with these wonderful, intelligent women and I always come away with a big load off my shoulders.  At least I had somewhere to dump my frustrations.

Today we had an unexpected visitor at our lunch, though. 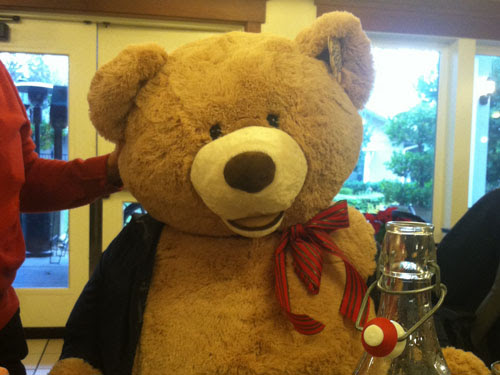 Meet Bartholomew.  Nancy found him at Costco and couldn't resist, thinking he would be wonderful to give to some children's home.  Only so far nobody wants him, so for the nonce, he is going to stay at the University Retirement Community (URC), where Joan lives, and sit next to their Christmas tree.  When Christmas is over, Nancy hopes to give him to the library for their children's section.  What a great place for a little kid to sit and  read.

He was quite a hit, though, and people took his picture and the bus driver for the URC decided he needed glasses. 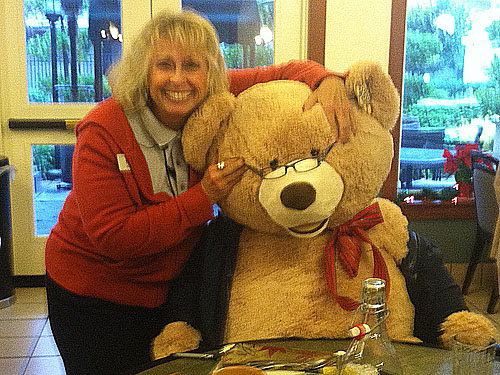 Before he moved to the Christmas tree, he was going to take a ride on the bus this afternoon, with a bunch of the other residents.  I think those retired folks are going to have a good time with him.
We could easily have spent another hour at lunch, but I had to get home so I could get to Logos. The person I relieved today was someone I had not met before.  When I said I was there to relieve her, she said "No, you aren't.  I don't feel relieved at all."  She was an interesting person who, I thought, had interesting lace across the top of her shirt until I realized it was a shoulder-to-shoulder tattoo of tongues of fire rising up off of her chest.

It was a rainy day and she had a light morning, but the rain was coming down harder and I had the lightest day ever. I think I made five sales.  Things started off just fine, with a guy wearing a North Face jacket buying a coffee table book about mountain climbing.  He said it would be perfect gift for a friend of his.

Believe it or not, I didn't have another customer until my friend arrived.  He was an hour earlier than usual and said he wanted to come in early before the traffic got crazy (he drives in from Sacramento to meet with a group of guys every week).  We chatted more than usual.  He said he will be gone now until January.  He bought a book of Japanese literature and a book abut code breakers in World War II.

Another customer, a tall guy with a wet pony tail bought "Notes from the Underground" by Dostoyevsky.

Some time after this my cell phone crashed.  I went to play my "4 Words" game to pass the time and the screen froze.  It has done this before.  You can't move anything and can't even turn off the phone.  I finally stopped trying and just let it turn itself off and now it won't turn on.  You can call the phone and it rings, but you can't answer it.  I phone recognizes it, but that's it.  Because I can see what is on in the photo files, even if I can't open the phone, this morning I moved all of the photos on the phone to my hard drive so I don't lose them.  We are actually, be still my heart, going to buy me a new one today.

A couple came in looking for books about teaching English to foreigners.  While they were there, the GPS on her cell phone was telling her how to get to the Avid Reader book store in the next block.
Two guys came in to ask about the future of Logos and left without buying anything, but then spied a book they wanted in Bargain books (a book on epidemiology).

A woman came in and walked purposefully to the back, was there a couple of minutes and then left.  A business man came in to drop off a letter for Peter and Susan.

The last customer for me was a couple, the guy in a yarmulke and either prayer shawl or neck scarf (hard to tell which one!) who bought a book by Voltaire.  His female companion, with her close fit black pants and her boots, as well as just her bearing, looked like she must be an equestrian.

And then it was over.  Walt came by, dripping wet, and we walked the two blocks to where he had parked the car  I had not brought my rain jacket with me, but wasn't all that wet when we finally got to the car.  It would have been lovely to have come home and curled up in the lap of a big bear named Bartholomew!
Posted by Bev Sykes at 5:27 AM

Email ThisBlogThis!Share to TwitterShare to FacebookShare to Pinterest
Labels: :Logos, lunch with Joan