The Atria Christmas saga started about a month ago when we met with the general manager and the woman who oversees the "inmates" of Atria about a statue that had been broken by the workers who had been around the place for weeks.  Richard, the general manager was effusive in his apology and even though I told him they didn't need to do anything, he insisted they must do something, like maybe putting Jeri and Phil up at a hotel while they are here or maybe they could treat us to dinner to make up for breaking the statue.  He blanched a bit when I told him it would be 11 people but he was determined.  Relief was all over him when I suggested that we have lunch there at Atria.  He readily agreed and would see that we had the special dining room and they'd do it up great for us.  Just keep him posted about when and how many people.

So when we knew the number (11) and when (December 26 and noon), I wrote to Richard, thanking him and letting him know when we would be coming  This was  two weeks ago.

I didn't hear from him so just to be sure that we had everything set up, two days ago I wrote to the "director of culinary" and explained everything to him, said we had Richard's OK and that if he couldn't talk with Richard, he could talk with Brianna, the woman in charge of "inmates" who had also been in on the discussion.  I asked him to please confirm that he had received my email.  I didn't hear from him either.

Then yesterday, when we went to see my mother for Christmas Richard was there, in Santa hat, driving inmates to church. I was so pleased to see him and said "so we're all set for tomorrow, right?"  He didn't have a clue what I was talking about and had not read my email from 2 weeks ago.  But he would take care of it right away.

He came back with the report that no, we could not have the separate dining room he had promised us because someone else had that, but they would set us up with a long table in the main dining room.  When I got there today, I didn't see any table set up and when Brianna made the mistake of walking by I got angry with her.  She said essentially that wasn't her business, but she would check for us.  She later reported that they had set up a table and we were expected.  It worked out fine, but I didn't see anybody using the private dining room.

Atria aside, it was a good day, except that the car wouldn't start, so we had to ride over in Jeri & Phil's rented Camero, which was truly not designed for 4 people.  Fortunately it's a short hop.
While we waited for the others to arrive, Jeri helped my mother figure out who all the people on her new blanket are.  That was good for a long time!  She's still not sure she knows who they all are. 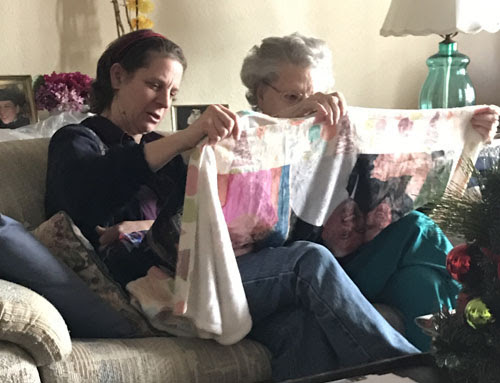 The others finally arrived and we headed off to the dining room, where the seating arrangement was fine, and I got to parade my whole family through the room.  The girls, of course, decided they had to sit with Uncle Ned. 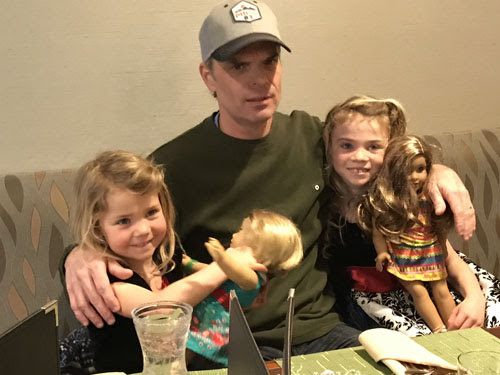 Lunch was leisurely and everybody got a chance to visit.  I'm not sure my other always knew what was going on, but she handled it well. 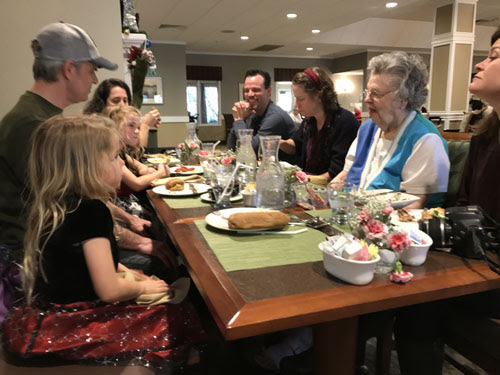 Our waitress, Judy, was quite attentive and made things go well for us. 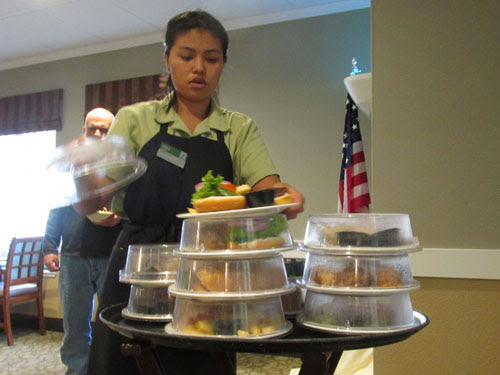 We had agreed not to open gifts at my mother's (too confusing for her), but just give her the gifts that were hers.  But Ned, who wasn't feeling well and thought he would NOT go back to our house (he later changed his mind) had brought t-shirts for everyone.  These were shirts he designed based on the movie he and Brianna made, called "Star Warts, Episode VII-1/2."  Naturally, there were photos.

I could see things were starting to get to my mother, so we moved the party over here, where many gifts were opened.  Bri was cute in her Star Wars Santa hat 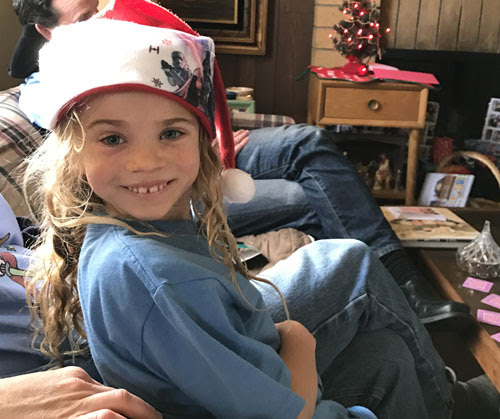 And Ned wants it to be known that this was a gag gift, not something he wanted or would have purchased for himself. (The look on Marta's face tells the story!) 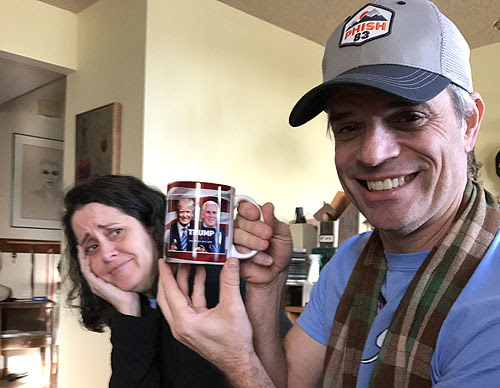 The girls showed off their new t-shirts for Uncle Phil. 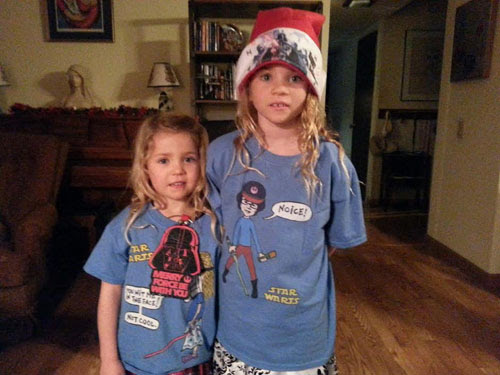 And when it was over, there was a new game to play. 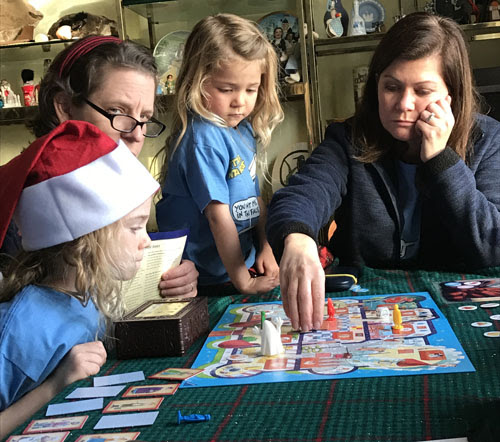 There were naps to be taken and Phil checked out his new cookbook. 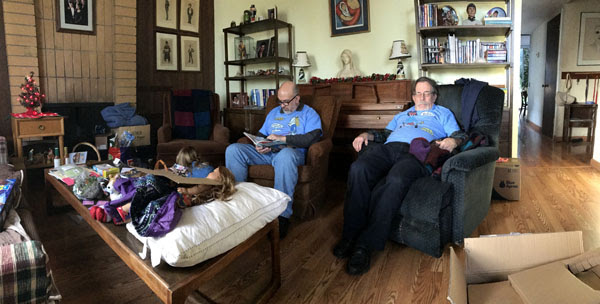 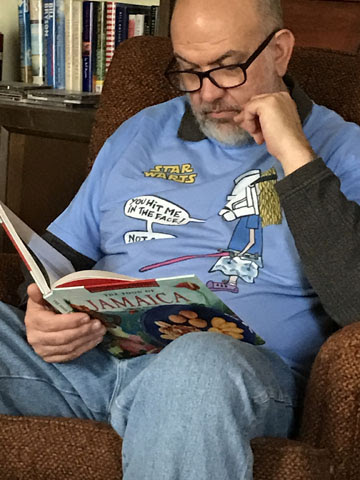 remembering no doubt, that at this time last year, he and Jeri, along with Ned and Marta and Walt's sister and her husband were all sunning themselves on the beaches of Jamaica and soaking up all that music and especially the foods (hot sauces were given as gifts this year!

All things considered, it was a very successful Christmas.  Jeri, Phil, Walt and I finished off some more of the prime rib from last night and then we settled in to call up YouTube on the smart TV and watch "Star Warts" again.

Tomorrow, Walt has to take the car to be repaired, and rent a car so we have some way of getting to Sacramento so I can review White Christmas.  Time to get back to work
Posted by Bev Sykes at 12:00 AM