Can You Hear Me Now/

We've had our Verizon experience.

We innocently walked into the Verizon store to see about getting me an upgraded phone, since mine died last night ("screen death," they say).  Two and a half hours later we walked out with 2 new phones and two Samsung tablets.  We either got an incredible deal, or these guys are the best gol-durn used car salesmen in town. 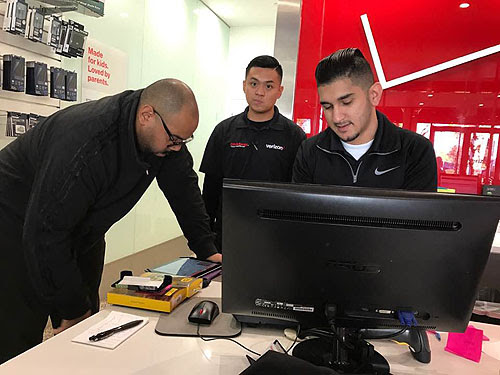 We were easy pickin's.  There were actually five guys and for the first two hours, we were the only customers.  We apparently happened upon one of Verizon's best sales in the history of Verizon and we could get an iPhone 7 (which I did not expect to buy, knowing how expensive it is) for me, a new Samsung for Walt (they would buy back his 2 year old phone), cut our monthly payment in half, and throw in two Samsung tablets just for ducks.  And the total we paid today was less than half the price I've seen for the iPhone 7 alone. 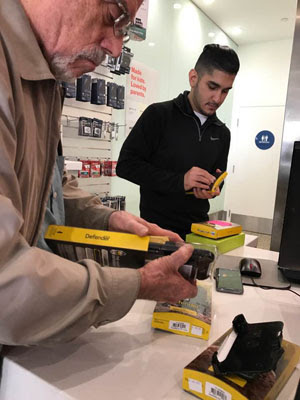 One of the guys was supposedly just learning how it all worked, so the manager did a lot of the computer.  The paperwork went on forever, Walt signed a dozen agreements (half for him, half for me) they downloaded some apps for me until I told them I could do it myself.

And, as I said, we walked out after 2-1/2 hours dazed and with so many bags one of the guy carried our bags out to the sidewalk for us.
The acid test will be when the bills start coming because apparently all the discounts we got won't show up for 2 months yet.  Walt did get that in writing.

While Walt was signing papers, I was testing out the new camera (which is amazing) and texting pix off to Jeri and Ned, the only two email addresses I could remember without double checking.  I also set up the alarm clock that rings every day at 9:30 to remind me to take my pills and installed Word with Friends. And then out to the car to test out our new toys.  We tried out the bluetooth and couldn't figure out how to configure it and decided it was kind of silly to be parked just a few blocks from the house trying to figure out how our new phones worked.

Needless to say,  am happy as a clam to have a working phone again...and to be able to play Word with Friends on my cell phone again.  There is also a big learning curve ahead of me, I know, but I'm looking forward to it.  Of course the iPhone 7 for Dummies that was on sale today for Kindle was ordered ($3) and has not been delivered.  Sigh.

I didn't have a lot of time to play with the phone at home because I had to get over to Atria and make sure my other got to her hair appointment.  I had the usual struggle with her.  How did I know she wanted to get her hair done?  How could she go when she had no checkbook, and what was I doing with her checkbook anyway.  What if she wanted to write a check.  And did she really have to go to the beauty parlor

We got through all of those and I actually delivered her to Lucy.  Found out Lucy cann't take credit cards and I had left my mother's checkbook at my house, so while her hair was beig done, I came home and got the check book.

In the end getting her hair done was a WONDERFUL idea!

Even she thought so.  I also took a photo of her hair from the BACK.  She is always complaining about people in the dining room who have beautiful curly hair and she has told me all of my life how disgusted she is when she looks at my hair because she ways wanted curly hair and never had it.  I thought she would like this photo: 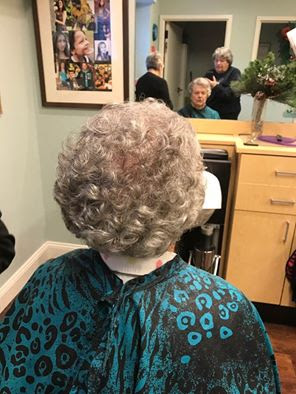 I told her that everyone in the dining room would tell her how beautiful she looked tonight and she actually was in good spirits when I pointed her down the hall to her room, and left to come home.
I am spending the evening trying to bond with the new phone, but Amazon has not delivered the Kindle iPhone7 for Dummies that I ordered.  Grrr.
Posted by Bev Sykes at 12:00 AM

Email ThisBlogThis!Share to TwitterShare to FacebookShare to Pinterest
Labels: cell phone, My Mother

Want another Words With Friends game? I'm Mary Z or Mary Zelle or something like that. Sounds like you got a great deal at Verizon.

We don't even have smart phones here. I haven't a clue about any of that stuff you bought. I do have a tablet (android ?) but the only thing I ever use it for is playing one game of solitaire at night when I climb into bed... and then reading the latest news on CNN and FB. That all takes me about 10 minutes and I'm off to sleep. Otherwise, it's my laptop for me, which seems like a dinosaur these days! I commend you for keeping up with the times!