It was 35 years ago this week when Mt. St. Helens blew her top. 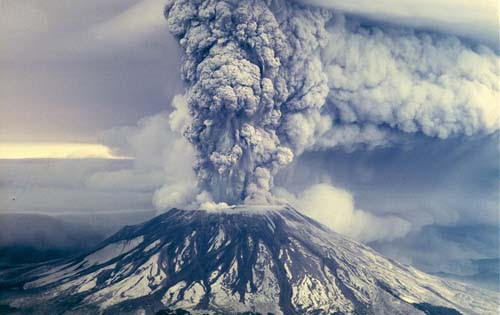 It was the only significant one to occur in the contiguous 48 U.S. states since the 1915 eruption of Lassen Peak in California.The eruption was preceded by a two-month series of earthquakes and steam-venting episodes, caused by an injection of magma at shallow depth below the volcano that created a huge bulge and a fracture system on the mountain's north slope. An earthquake at 8:32:17 a.m. on Sunday, May 18, 1980, caused the entire weakened north face to slide away creating the largest landslide ever recorded. This suddenly exposed the partly molten, gas- and steam-rich rock in the volcano to lower pressure. The rock responded by exploding a hot mix of lava and pulverized older rock toward Spirit Lake so fast that it overtook the avalanching north face. 57 people were killed in the eruption, including 84 year old Harry Truman, who had lived on the mountain for many years and didn't believe it was going to erupt
(surprised HIM, I'll bet!)

At the time of the eruption, our very first foreign student, Eduardo, from Brasil, was living with us.  We were all very interested in what was going on in Washington State and Eduardo really wished he could see it.

Walt's good friend Dave lived near the mountain in Beaverton, Oregon, which was receiving a lot of fallout of volcanic ash.  So we planned a trip to take Eduardo to see Mt. St. Helen.  It just so happened that on that same weekend, our friend Michele was giving a surprise 50th birthday party for her husband Richard.  We knew that there would be a stripper there and we gave Eduardo the choice of Oregon or stripper.  But he grew up in Rio de Janeiro and could see naked ladies anytime -- but when could he ever see volcanic fall-out again?  We took a friend of his with us and went on a camping trip.

Because of all the ash still in the air, it was recommended that we wear face masks for our protection. 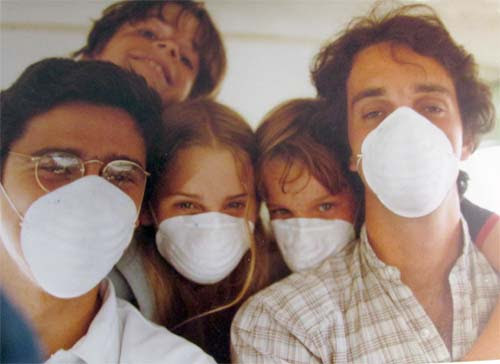 There was in deed a thick coating of ash on just about everything, especially on the leaves of the plants around Dave's house.  Our kids, ever the entrepreneurs, gathered a bag of volcanic ash and when we returned home, they set up a "Punch and volcanic ash" stand. 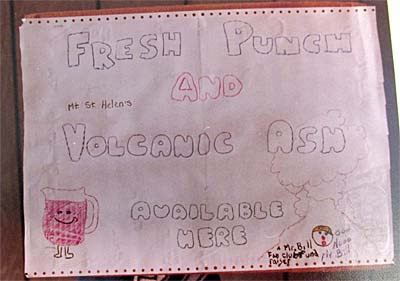 They sold little bags of ash for 10 cents, I think, and one irate father stormed over demanding his kid's money back because he felt tht he had been cheated.  We assured him that yes, we really HAD been in Oregon and this really WAS volcanic ash...but if I remember correctly, he didn't believe us and insisted we give his kid's dime back anyway.  (The kids may remember this more accurately than I do).

I revisited Mt. St. Helens in 2000, when Peggy was here.  We were staying with my friend Diane in Seattle and Peggy also wanted to see the mountain.  I was actually curious myself to see the change that had taken place in twenty years. 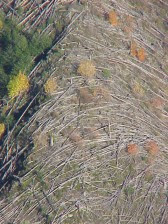 Twenty years after the fact, the signs of the devastation were still evident everywhere. The power of the explosion from the mountain could be seen in the dead trees, still lying like matchsticks wherever you looked, many larger trees uprooted (and this after years of clean up). There were burn scars on the walls of the opposite hills, and walls of silt/lava many feet tall seen on the floor of the valley beneath the mountain. It was an awesome sight seeing it up close and personal then.  I wonder how it has changed in the 15 years since I last saw it.
Posted by Bev Sykes at 12:00 AM

We were at the Visitor Center two years ago. It's STILL amazing! It was our third time to see the mountain. The first was in 1990, second in 2003 (I think).