It felt like the end of some Bacchanalian festival, a gastronomic feast and we were all sated.  I groaned when my mother settled back into her chair and said "Did we have lunch yet?  Do we need to go the dining room?" 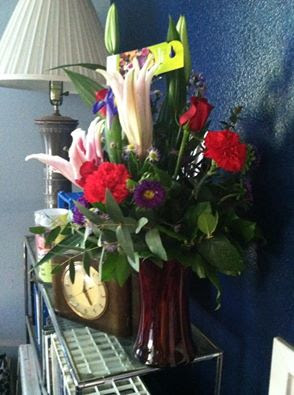 It was a nice Mothers Day, starting yesterday when Walt and I returned home from a show I was reviewing to find this lovely bouquet waiting for me from Tom, Laurel and the girls.

This morning Walt and the dogs all gave me cards (well...that's 2 cards.  One from Walt and one from the dogs)

I made myself (and Walt) chocolate croissants from Trader Joe's, always a special treat.

Jeri called in the late afternoon and we had a very nice chat.  Everyone send vibes to her that she is not selected for a jury panel tomorrow.  She's been sick all week, and is still sick, and she has papers to grade and a show to play tomorrow night.  Horrible time for jury duty!

And then Tom and the girls called later.  Brianna was all excited about the Vitamix that Tom had gotten Laurel for Mothers Day (lucky lady!).  Bri was all excited because they were going to make ice cream using it tonight.  I told Tom I had just written her story for the week, about how they came to invent ice cream, so it appears it is a timely story.

But in between all these other things there was brunch at Atria with my mother, Ned and Marta. I was so pleased I was able to get reservations (must make them weeks in advance) because they had a table set up for "Mildred's family."  The waitress brought mimosas, and my mother couldn't understand why the waitress (who serves her every day) knew her name.  But the mimosas were nice. 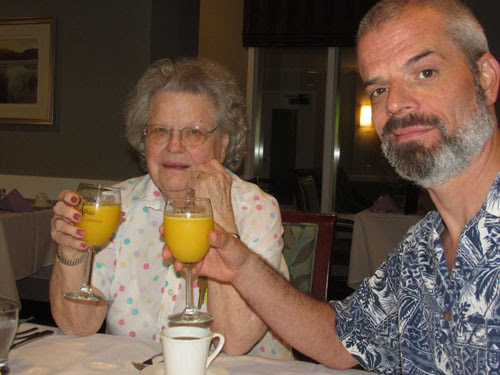 The line for the buffet table snaked all around the room, and I knew my mother would not be able to stand that long, so I said I would get her food for her.  A zillion choices and all she wanted was a crab cake (I added fruit salad, since she has fruit salad every day at lunch).  The line moved quickly and soon divided into the omelet people, waiting for their omelets to be made, and the "other food" people.  We were the other food people.  The selection was huge and I only got a few things, but my plate was heaped. 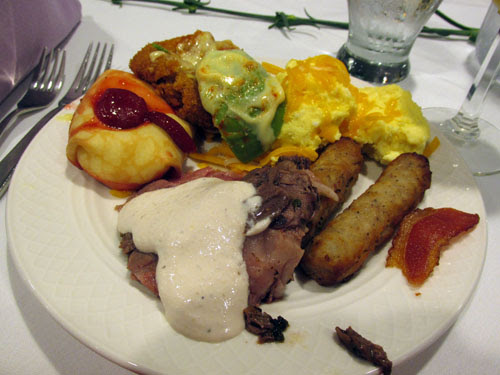 The crab cakes, which were delicious, were served with an avocado and hollandaise sauce.  The prime rib was rare (usually it's too well done for my tastes) but the blintz ended up sitting on a pool of horseradish sauce, which made an interesting taste sensation to be sure.  I left the eggs.  I was entirely too full.

Ned's plate was much fuller than mine and my mother, whose appetite has shrunk to almost nothing was aghast at the thought of his eating all that food, and shocked when he (and Walt) went back for seconds.

After the main course there were desserts and I managed to get a cream puff and a small slice of cheesecake, which were just that much too much so that I could barely move when we waddled back to the apartment. 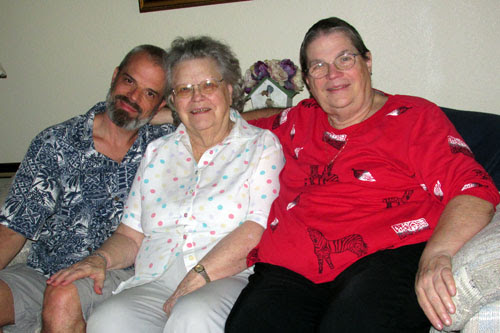 We kind of sat in a post-prandial haze, nobody talking but my mother who kept saying "don't all talk at once."  Marta dozed off, I was about to and I didn't look over at Walt, but he usually is the first to doze off in situations like this.  My mother was hanging in there, but I knew she mentioned wanting a nap.  So we did the logical thing and retreated to our respective homes for a real nap.  It's what old people do, I've learned and even Ned, pushing 50, is no spring chicken any more!

When dinner time rolled around, Walt and I agreed neither of us felt like dinner (much less the rack of lamb I had planned).  He ended up eating a leftover slice of pizza, I, who had an unsettled stomach (probably caused by blintzes with horseradish sauce!) downed a couple of TUMS and called that dinner.

Another Mothers Day in the books and now on to summer..... 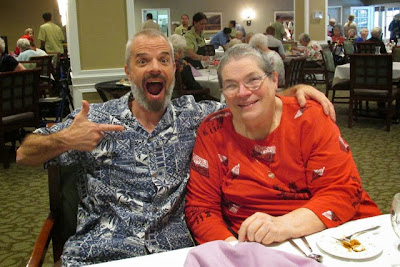