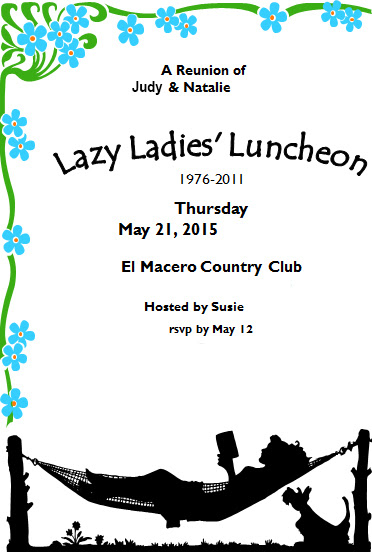 This luncheon has been going on for 40 years.  A chance for friends to get together for a leisurely lunch.

They invited me yearly for a long time, but the lunch was always mid-week, and I always worked.  They eventually stopped inviting me.

They took a break for a few years, as family matters which go along with an aging population interfered, but I was delighted to get an invitation for this "reunion." (Though sad that, ultimately, Natalie was not able to attend after all.)
The only problem was that it was being held on a Thursday, my Logos day.  I finally decided to play hookie.  Anne, who filled in for Sandy when she was on vacation is now an on-call volunteer and I asked her if she would work for me today so I could go to the lunch.  She agreed, and I was free to finally attend my first Lazy Ladies' Luncheon.

Apparently the history of this lunch was that it started in 1976, a chance to get together with those women whom you first got to know in PTA, or Little League or Scouts or some other organization and now never see, unless you happen to pass accidentally downtown (where everyone admits nobody goes any more!)

Apparently the event continued annually until about four years ago and there hasn't been one since.  But perhaps the impetus for reviving it came from a tea I attended a few months ago, where I got to see a lot of women I know in Davis, but rarely see any more.  It was held at the home of our kids' former nursery school teacher.

So when the "save the date" e-mail came, I assumed this, too, would be held at someone's home and was surprised when the official invitation arrived saying it was at the local country club.

Was I surprised when I arrived! This was no "little" luncheon.  There must have been 80-100 women there and I probably had known half of them, at least, over the last 40 years, though may not have seen them in 30.  What fun!  There was the psychiatrist's wife, the wife of our kids' high school music teacher, two women I actually see for lunches a few times a year, the woman I used to work with at the bakery, a friend of Marta's mother whom I did not recognize until she introduced herself to me, lots of women I worked with on various school projects, the former mayor of Davis, a few women who had been involved in one capacity or another with the Davis Comic Opera Co., a woman who is the town historian, our kids' nursery school teacher....everywhere I looked there was either someone I remembered or someone who looked familiar and I was embarrassed not to remember her name.  Fortunately we all wore name tags. Only one woman brought up Paul and David (for which I was grateful), but her kids had performed with our kids (David's only on-stage kiss was with her daughter).

It was a real ego booster for me, as I had so many women come and tell me how much they enjoyed my reviews (though one woman asked if I was still writing them, since she hadn't seen any in awhile--and this is my busy season, so there has been at least one a week, if not three!)

I sat with our friend Dair, one of my favoritest people, whom I have not seen in several years, since she moved to a retirement complex out of Davis, but she and her husband were the reason why we took on our Mexican daughter, Marie, who has now become such a successful business woman.  She had not heard of all of Marie's recent fame and we were able to smile that we both remembered her when she was just a little girl in a little town in Mexico that someone thought could achieve good things if she had the chance of an education in the United States. It was definitely nice getting caught up with Dair and sharing stories about our grandchildren.

There was a lovely salad and soup buffet lunch, with cookies for dessert, and our hostess greeted us with a few words, starting out by asking who in the room has had some part of her body replaced.  Probably half of the room raised their hands (this is an experience I have yet to have, though can knee replacement be put off forever?)

I came home on a real high.  And as it turned out, I could have still gone to work at Logos, since I was back home by 1:30, but since I immediately fell asleep for about 2 hours, it was probably just as well I had taken the afternoon off. 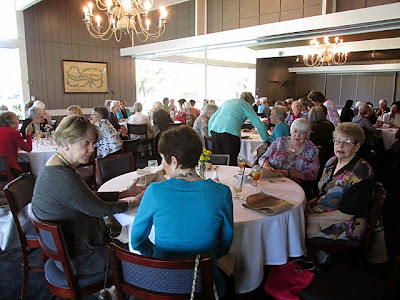 Email ThisBlogThis!Share to TwitterShare to FacebookShare to Pinterest
Labels: lunch