While I was engrossed in my daily dose of blood and gore from one of my marathons (NCIS, Criminal Minds, SVU), Walt was upstairs watching a soap opera.

Actually, it wasn't a TV soap opera, it was more a close to home soap opera.

First I have to explain our street. 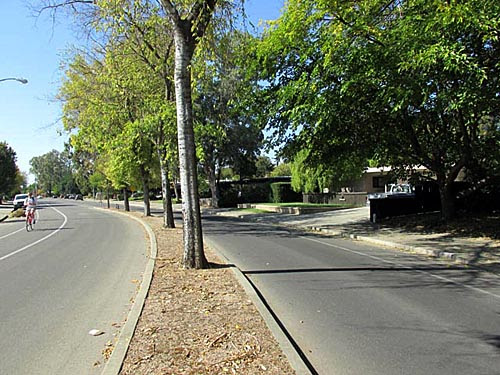 This is the street where we live, our house being just out of sight on the right.  The street takes a couple of gentle turns both where you can see it here, and behind me, coming from the direction of the high school where it makes a sort of an S turn.  In our first years here, there was no divider down the middle and the high school kids used the street for a race course.  There was a major accident almost every year.  One year they crashed through our neighbor's yard and dead ended on top of our newly planted tree.

The worst accident, though, was when a car went out of control and went through the wall of our neighbor's house, across the street from us.  It stopped at the foot of the bed of a little girl who was sleeping and it set the house on fire.  All the people got out all right, but the pets died.

After that accident we had several meetings with city planners to figure out how we could cut down the speed and the accidents.  After discarding several suggestions, we finally went with the planter in the middle of the street, with the idea that as the trees grew, it would become more of a residential looking area and kids would be less likely to speed.  It seems to be working because we probably have not had an accident along this stretch in about 20 years.

But today, Walt spied a car parked just beyond our house.  Not only was it parked on the street, where you aren't supposed to park, but it was parked so that its back end was near the curb and its front end poked out into the street (kind of like I park on the street at Atria--but I'm in a legal spot!).  This made it difficult for cars to pass, impossible for bikes to ride down the bike lane, and very difficult for the big city buses to pass by. At one point there was a bus stopped with the driver out of the vehicle, trying to decide if it could squeeze by the car, while a line of cars built up behind it, waiting for it to move.

Walt was watching all the fun from his office upstairs, and then running downstairs to let me know what was happening, since I was sitting in the back where I couldn't see out the front window. We just don't have excitement like that around here!

Finally someone called the police and a police car and a tow truck showed up to move the car. 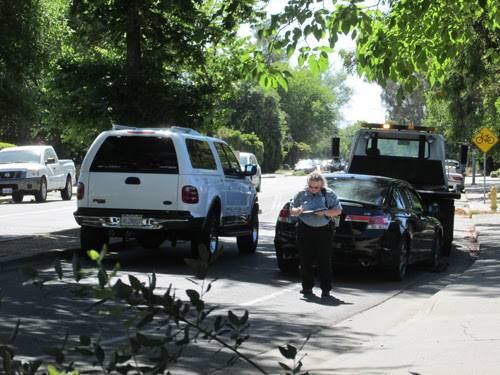 They got it moved just in the nick of time, right before another big bus came by. 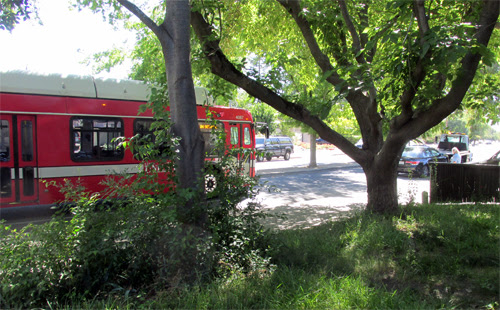 I wonder what happened when the owner of the car returned to find his car gone!

So we've had our excitement for the year and life is henceforth a blank.
Posted by Bev Sykes at 12:32 AM