A Brief Return to Ukraine

I collapsed last night.  Not literally. I mean not literally in a bad way.  It was after midnight when we got home from San Francisco and I sat down to watch The Daily Show and pretty much conked out for the night.

Walt was running around doing final stuff for the upcoming Beer and Cider Festival that he is helping to organize, which will take place on Saturday.  This is a fund raiser for Citizens Who Care, the support orgaization for the frail elderly and their caregivers.  He's been on the board for several years now.  They got a wonderful piece on the local news yesterday and, thanks to having a son in radio, will have a good plug on Jack-FM today or tomorrow.

He got home about half an hour before we were to leave for the Bay Area.

As we usually do, we drove to Walnut Creek and took BART in to the city to avoid having to drive in city traffic and, harder, find a parking place.  BART (Bay Area Rapid Transit) is a great deal because it lets you out just a couple of blocks from Davies Hall.

I was upset shortly after we left the house because I realized I had not brought my Kindle and would have nothing to read on BART while we rode to the city.  But technology is my friend and I discovered I could get the book on my iPhone Kindle app, so all was well after all and I was able to read to and from the city.  Whew.

Walt gave me my BART ticket when we got to the station, I went in and put it in my pocket.  We then sat outside waiting for the train, got on and started off to the city. 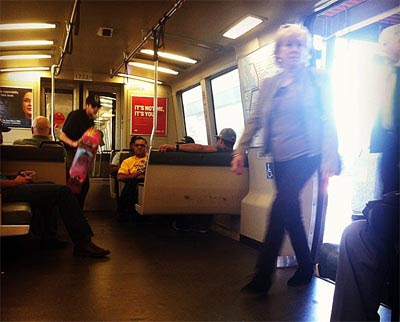 When we got on, I checked my pocket and my ticket, which would get me out of the station in San Francisco was there.  When we got off the train, I went to get my ticket and it was gone.  I don't have a clue what happened to it, but felt terrible about it.  We couldn't find a station attendant to explain my plight and that I was stick inside the terminal gates, so I just went out a 'BART EMPLOYEES ONLY' gate.

Char, who also comes in to the city on BART, texted me to let me know she was at the restaurant, Max's Opera Cafe, drinking and we should meet her there.

Max's is 2 blocks from Davies Hall and we eat there whenever we go to the symphony.  I don't know if Char and Walt eat there every time they go to the symphony without me.  This time I was smart.  I have reached a point where I just can't eat a full dinner any more.  There are lots of nice options on the menu, but I went with a stuffed mushroom appetizer.  It was five large mushrooms stuffed with a cheese mixture, topped with pesto, and sitting in marinara sauce.  It was just the perfect size, along with some bread and if I had ordered something from the dinner menu, I would have been stuffed.  And besides that, the mushrooms were delicious!

The "main event" after the first act of Stravinsky's Jeu de cartes and Elgar's Cello Concerto in E Minor was Mussorgsky's Pictures at an Exhibition.  We were in time for most of the pre-show chat and his comments on the Mussorgsky were fascinating.  I never realized that the composer wrote the piece for piano and the orchestral version of it has been arranged by several people.  We were seeing the Ravel version, but he played several other versions, each quite different from the other.  The oddest arrangement was for a balalaika orchestra.  (He said that he decided not to buy the version for a saxophone orchestra!) 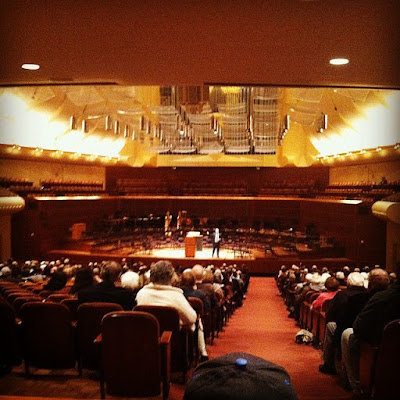 But the piece was, of course, glorious.  The final section, "The Great Gate of Kiev" was very moving and we remembered when we were in Kiev standing at what is left of that gate. 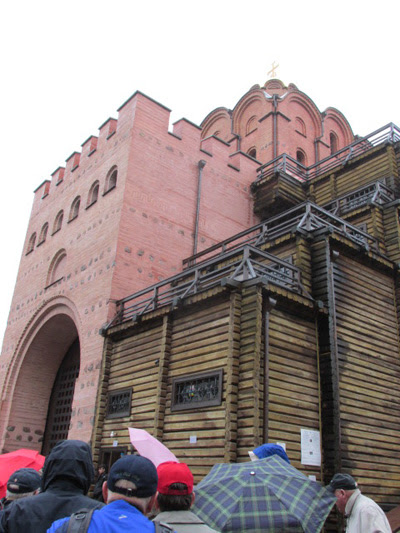 I told Walt I didn't hear anything which indicated a big pink plastic cart where you could buy soft drinks, though.
Posted by Bev Sykes at 7:16 AM

Email ThisBlogThis!Share to TwitterShare to FacebookShare to Pinterest
Labels: symphony

Some of my favorite compositions! I miss going to the symphony (sometimes). And I learned from John's sister years ago to check out the appetizers. They make some great meals.