Spoiler alert:  In the end, Cinderella ends up with the prince.  I know, I know...I hate people who give away an ending like that.

It was like going to a royal wedding at the Sacramento Community Center for the opening of Rodgers and Hammerstein’s "Cinderella" tonight.

There was a royal white Cinderella coach drawn by white horses on which you could have your picture taken, which pulled up in front of the theater. 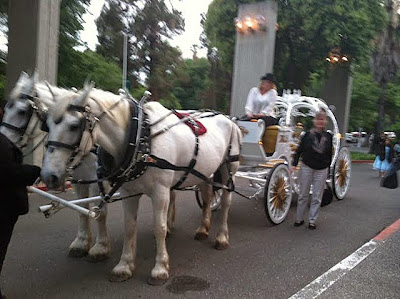 The red carpet featured a parade of pint-sized princesses with tiaras and sparkly shoes. (Left your tiara at home? No problem. You can buy one in the lobby.) In the lobby you could also pose in front of the stairway to the palace.

In the theater itself, the stage was dominated by a magnificent forest of trees which, over the course of the evening would move in all sorts of wonderful ways to make different configurations. 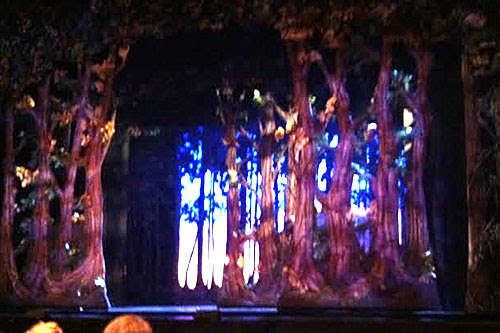 In the orchestra pit there was a real live orchestra with a real live conductor (Jay Alger). So many musicals these days use synthetic music that the sound of a full orchestra of over a dozen real musicians and 20 different instruments was like six months at the seaside.

Then there was the production, which features the most spectacular magical costume change I have ever seen...the sort that makes you want to hit "rewind" so you can see it again because you can’t believe what you just saw (kudos to William Ivey Long, costume designer).  Cinderella and her fairy godmother are discussing why she can't go to the ball, and Cinder indicates her plain dress and suddenly...poof!...in the middle of her song, Cinderella turns around quickly and her dress magically turns into a gorgeous ball gown.  There wasn't a person in the theater that didn't have his or her mouth hanging open, wondering how did they DO that????

And then, if that wasn't spectacular enough she does it again in Act two, this time tossing a bundle of rags up into the air and when they come down on top of her, she is wearing a gold gown. I've seen quick change artist acts on shows like America's Got Talent so I know that it is a trick that many people do, but it has left me gobsmacked each time I see it.  That was worth the price of admission right there (especially my admission, since I was sitting in a $90 seat for free!).

There’s even a real fire-breathing dragon to start things off. No expense has been spared on this production!  And fortunately it's a production worthy of the expense.

As we left the theater, I was following behind a mother and her daughter, about 4 or 5 years old, I would guess.  She was wearing sparkly flip flops and one of them fell off on the red carpeted steps to the lobby.  I asked her if she was hoping the prince would find it and come looking for her.

I think my humor was a bit too sophisticated for her.
Posted by Bev Sykes at 1:02 AM