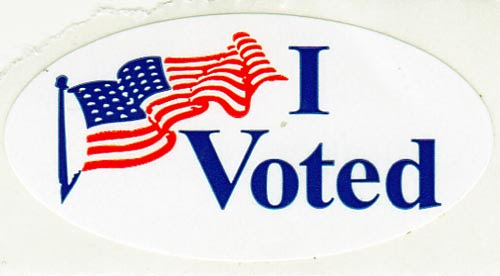 Yesterday was very irritating.  I cannot count the number of voting reminders I got.  The most irritating came from MoveOn.org and one other FB group I can't remember.  They each sent a message asking if I was going to vote.  I was planning on ignoring all such messages, but I could not close the window until I had checked whether I had already voted or was planning to vote, so I checked that yes, I would vote.  But no that wouldn't close the message.  Immediately another one popped up to ask what time of day I would be voting.  Again, I could not close the message until I had answered, so I checked "mid morning."  Then another one popped up asking if I would tell all my friends.  I never do because these messages bug me and I'm not going to bug all my friends, but I lied checked that yes, I would tell my friends, but then another message came asking me if it could take my entire friends list and send out messages for me.  I ignored it.

THEN I got a message from some guy I didn't know--along with his photo--saying he saw that I planned to vote and would I join him in inviting all my friends to also vote.

This happened with BOTH of the FB groups.

I know it's an important election and I applaud the dedication of those working hard to get out the vote, but it was overwhelming and had the opposite effect one me.  If it weren't such an important election, I might have stayed home just because they had bugged me so much.

Jeri emailed this morning that she was staying off of social media because it was so full of voting reminders, and I decided that was a good idea.  She had four messages from Elizabeth Warren just this morning.  We agreed that Warren should never run for president.  I think she would make a wonderful president, but suspect that as a woman she would run into the same problems Obama did--a Congress dedicated to not letting her achieve anything.  I think she does better in the Senate.

Walt and I went off at 10 to vote.  I considered not taking my walker, since I'm feeling so much stronger now but, anticipating that there might be a line, I took it.  Davis is a very politically aware town and I'm sure most people would be voting  The buses are running for free so that people can get to their polling places.  Outside the polling place, where bikes are parked, I saw several of the "take and ride a bike" bikes that are available around town, another sign that people were finding ways to the polling place.

There was no line here, but nearly 300 people had already voted by 10.  I had my cheat sheet and marked my ballot quickly.  Too quickly, in fact.  I didn't notice that there were two democrats running for Senate and accidentally did NOT vote for Dianne Feinstein, the first time since I could vote for her that I did not.  I could have changed it but decided to leave it.  If she loses by one vote, it will be my fault.  At least I voted for a democrat.

The first vote I could cast (you had to be 21 then) was for Johnson, when he ran for reelection in 1965.  He was running against Barry Goldwater.  I was working for the physics department then and many of the physicists formed a group called Scientists and Engineers for Johnson, which I became part of and did work for.  We worked hard and it was a triumph when Johnson won.

It set me up for optimism in succeeding elections, so I'm always nervous when elections come around.

I want to avoid all news reports and social media today.  I don't want to hear that there is a blue wave about to come, only to discover that when the ballots are counted, they had the wrong color.  I only want one emotion when it's all over, either elation or depression, not a roller coaster all day long.

Walt had bad news yesterday.  Over the weekend, he had a low fever and was coughing a bit and felt shaky.  He had to leave work early and we skipped a wedding reception we had looked forward to.  As it turned out, that was a good decision.

He called his doctor yesterday morning and they decided to reschedule his surgery for 2 weeks from now (Thanksgiving week).  I feel so sorry for him because he's so damned uncomfortable.  It's difficult for him to sit down and he spends most of his time pacing around.  But better postpone than risk complications during surgery.
Posted by Bev Sykes at 12:17 PM

Email ThisBlogThis!Share to TwitterShare to FacebookShare to Pinterest
Labels: voting

I hate that Walt has to wait for some relief. Waiting is just no fun.

And now we wait for election results.

You're right; waiting is no fun....for surgery or election results! Keeping fingers crossed for both.