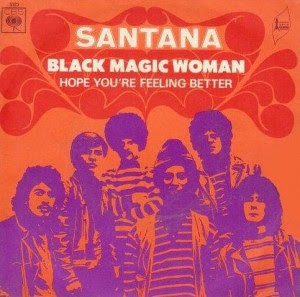 Unfamiliar with this week's tune: Hear it here.

1) Black is this week's signature color because Friday, November 23, was "Black Friday," when retailers cut their prices and consumers flock to the stores. Did you score any "Black Friday" bargains?
I stay away from stores on Black Friday like the plague.  The last thing in the world I want to do is fight with 1,000 other people for something I probably don't need anyway.

2) On busy shopping days, carts often litter parking lots. After loading your items into your car, are you careful to return your shopping cart to the store or the designated cart receptacle?
Sometimes, but not lately.  I use the cart as a walker instead of taking my walker into the store, so I need it to hang on to and if I return it, I am in danger of falling on my way back to the car.

3) Who on your gift list is hardest to buy for?
Walt.  We have been married 53 years and I can probably count on the fingers of one hand the gifts I've given him that he has actually used.  But it's not just me.  His mother always gave him clothes that I would find years later still in the box under the bed.  Last year I bought him wine and I think he actually drank it.

4) Feasting and football are also popular Thanksgiving weekend pastimes. Do your Thursday-Sunday plans include enjoying leftovers or watching a game?
Not a big football fan.  I chatted with my granddaughter, who chose "Bridge to Terabithia" as our next book club book, so I spent the afternoon reading the book and then watching the movie.  I am now all cried out.

5) Macy's Thanksgiving Day parade is an annual event. It began in 1924 as a local event in New York. Today it's nationally televised. Did you watch it?
I don't usually, but I did this year.  I liked it better when it was a real parade and not a series of musical performances with a bit of parade thrown in for good measure.

6) What did you give thanks for on Thanksgiving 2018?
Well, the president said that he gave thanks for himself, and I certainly did not count THAT in my things to be thankful for.  I was thankful for a nice, low key Thanksgiving brunch with my mother at Atria--if she is around next year, it will be her 100th Thanksgiving.  I'm thankful that my health is improving, and I am always thankful for everyone in my family, especially Ned this year, since he has been so helpful to us.

7) At the first Thanksgiving, there were no forks. Pilgrims ate with spoons and knives, and forks didn't become popular until the 18th century. Think about your Thanksgiving place setting. Did you have both a salad and a dinner fork?
I did not set a Thanksgiving table this year, but when I do, yes it does.  (Except the salad for is usually used for dessert)

8) Pies are a popular Thanksgiving dessert. What kind of pie did you enjoy? Or did you have ice cream? Or did you skip dessert?
I cannot envision Thanksgiving without pumpkin pie.  It is such an integral art of my Thanksgiving that I made a pie for Walt and me, since we were going out to friends' house for dinner and I didn't know if we would get pumpkin pie or not.  As it turned out, we left early so did not have any of the pumpkin pie, but came home and ate the pie I had made.  Skip dessert?  Surely you jest!!!

9) This week's featured band, Santana, was named for its founder, Carlos Santana. He was born in Mexico. When at a Mexican restaurant, what do you usually order?
It depends.  I love chile rellenos but I'm kind of particular about them, so unless I know that they are going to be GOOD chile rellenos, I will order a taco or burrito.  I frequently try flautas, hoping to recreate the wonderful flautas we used to have in Berkeley, but so far have not found anybody who makes them the way I like them (that includes our Mexican daughter, who owns a Mexican restaurant!)
Posted by Bev Sykes at 12:00 AM

45 gave thanks for himself? What the actual what???

Yes, he did. He's thankful that he's been able to make so many changes in the country.