We've had the annual Gilbert dinner and I've taken my China jacket out for a trip again. Walt rented a car for the trip, since we need a part replaced on our car and he didn't feel comfortable driving it all the way to San Francisco and back again until the repair had been made. The rental car didn't have a way to play music off my iPod, so I "had to" read all the way to the city while Walt drove. 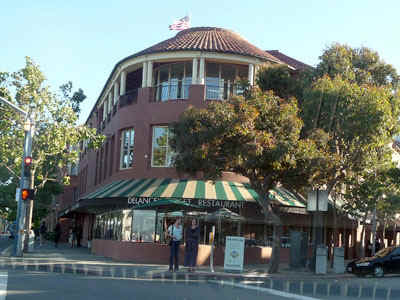 This was the Delancy Street Restaurant, the same one we had been to last year. The restaurant is a big part of the Delancey Street Foundation, the country's leading residential self-help organization for former substance abusers, ex-convicts, homeless and others who have hit bottom. Started in 1971 with 4 people in a San Francisco apartment, Delancey Street has served many thousands of residents, in 5 locations throughout the United States. Residents at Delancey Street range from teenagers to senior citizens, and include men and women and all races and ethnicities. The average resident has been a hard-core drug and alcohol abuser, has been in prison, is unskilled, functionally illiterate, and has a personal history of violence and generations of poverty.

The restaurant, staffed by residents of the project, looks upscale, the food is great, and the price is considerably lower than you would find at a comparable restaurant elsewhere in the city.

One nice thing about the place is that it is easy to find parking--that's a huge deal in San Francisco, where it sometimes takes longer to find parking than it does to eat dinner. Here there is usually available on street parking, if you can figure out the confounded new fangled way to pay for parking. 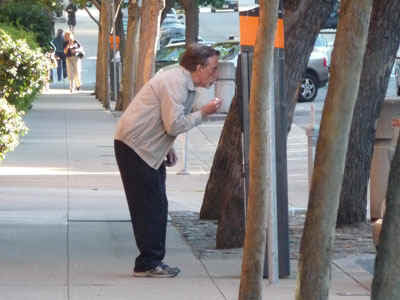 And if you can't, valet parking is only $4, which seems incredibly cheap.

Since we were early we spent some time checking out the menu posted in front of the place, 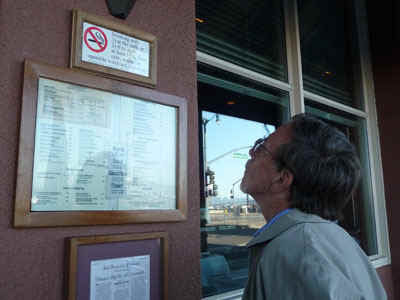 and then went into the bar to have a glass of wine while we waited for the others to arrive.

There were 10 of us this year and we had a table off in a corner. 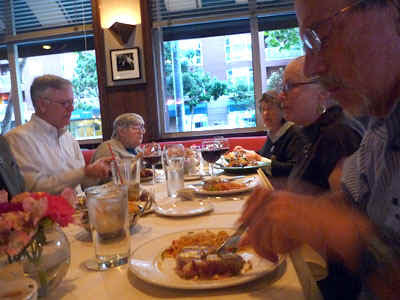 This is not a restaurant you go to for speedy service. It was probably half an hour before someone came to take our order -- and there were very few people at in the place. It also seemed to take forever for the food to come. But when it did, it was worth the wait.

I had planned to order the rack of lamb, which I had enjoyed the previous year, but the seared ahi tuna with wasabi noodles sounded intriguing and was so good I was halfway through eating it before I remembered to take a picture. 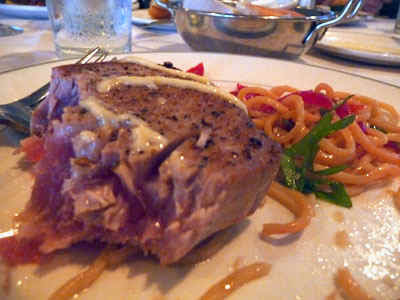 It was all very low key, but I just love getting together with these people at this dinner every year.

It would just be nice if Gilbert had been there to enjoy it with us.

*Gala Reinternment of Uncle Buddy
Posted by Bev Sykes at 12:37 AM

Email ThisBlogThis!Share to TwitterShare to FacebookShare to Pinterest
Labels: GRUB

Oh wow looks like wonderful food . Looks like a really nice restaraunt to eat at and visit .