Here is a recap of our week in the remote mountains of Yosemite. 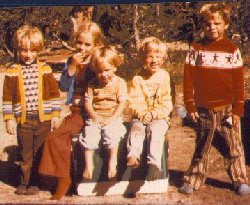 The drive up was rather uneventful. We drove without stopping until we were well into downtown Sacramento (20 miles), where we made our first stop at McDonald's for the usual stuff, which we washed down with Kool Aid. The kids went to sleep and probably slept in shifts for most of the trip. It was after 6 when we got to the park and we had no trouble finding a campsite at Porcupine Flat. It was really a very nice place. We had a log, which made a very comfortable niche for sitting, a stump which was just the right height for cooking, a slightly warped and slanting, but nonetheless useful picnic table, and a flat, relatively unrocky space for a tent. We ended up staying there for the whole four days, in spite of the bears...but more about them later.

On Tuesday we took our first side trip to Devil's Post Pile which, if you have never been there, is something really worth seeing. Large columns of basalt looking like they were carved there and a mountain of pieces which had been broken off by a passing glacier.

The road to Devil's Post Pile is under construction, so we were stopped for a long while (during which we fixed and ate lunch), but eventually we bumped our way down the rutted dirt road until we got to the place. It's rather disheartening to follow 8 miles of twisted, rocky, dirt road and get to the bottom to find a traffic jam! We had a hard time finding a parking place in the very large parking lot.

You walk 0.4 miles to the post pile and once again there we managed to draw attention to ourselves. First of all, you can take a trail to the top of the pile, which Walt and the kids did, while I stationed myself down below with the camera so I could photograph my children perched precariously atop these columns which appear in danger of falling at any moment. Then they came down again and we were the only people there. The mountain of falling posts is such an invitation for climbing that we couldn't resist letting the kids scamper about on the rock -- even David (though Walt followed him up the slopes after Tom got caught half-way up and had to be carried down).

While the kids were engaged in the delights of climbing, investigating the passing frogs, etc., all of those people in the parking lot began to wander by -- including a pack of Boy Scouts. All of a sudden, when a sufficient crowd had gathered, Paul, who was right at the very top, began to scream and scream and scream. You could have heard him all the way back to Yosemite. We were sure he was at least ready to fall down the mountain, and the whole pack of Scouts, on orders shouted by their leader (a chubby, grey crew-cut gentleman in a Scout uniform) started climbing rapidly over the rocks to save him. Walt left David to race up and save him. People were gasping and clutching each other. I had the good grace NOT to take his picture. And for several tense minutes, the world listened to the hysterical screams of this five year old trapped on top of the mountain. Walt reached him first and the cries abruptly stopped. His problem? An ant was crawling over him!! What do you say when a 50 year old Scout leader looks at you accusingly and asks, "that your kid, lady?"

Everything after that was rather anticlimactic. We made it back to the car with no other disasters occurring and except for one stop at a Safeway, we went straight back to camp. The Safeway, by the way, was another experience. How often do you stand in a check out line and hear one checker shout to another, "Hey, Charlie, how much are the worms?"

Tuesday night was The Night of the Bears. We knew they had been around the night before, but they must have been hungrier this night. They started showing up earlier in the evening and we cooked dinner to the sounds of clattering pans and shouts of "Hey, you, get out of there!" from other campsites. The kids toasted marshmallows and Walt was pumping up air mattresses. I was reading to the kids at bedtime and they (3 of them) decided they had to go potty, which was down the road and around the bend. As Walt was leaving, he mouthed to me that the bear had been outside our tent, which needless to say, did wonders for my morale as I sat there with Tom and David!

Mr. Bear didn't show himself to me and we went to bed, only Walt discovered that I had stepped in a marshmallow and smeared it all over his sleeping bag and air mattress and he spent quite a bit of time cleaning it off so the bear wouldn't smell it and come charging into the tent. That didn't do too much to help me get to sleep either. But I finally did get to sleep and slept as well as one ever does in a cold tent and a cramped sleeping bag, until 3 a.m. (never take a watch with a luminous dial on a camping trip) when Tom woke up.

I got him back to sleep again and was trying to sleep myself when I heard the unmistakable sounds of sniffing and snuffling and grunting right about a foot from my head. My life flashed before my eyes and I spent some time trying to figure out how I could quickly get out of my bag and save my children when the bear ripped through the tent. I worked myself into quite a state and found I was lying absolutely rigid and shaking like a leaf for about an hour. However, terror can only last so long -- especially at 3 a.m. -- and I gradually began to reassure myself about how well fed bears are in national parks and how seldom you read about unprovoked attacks on campers and all of that. The snuffling had also disappeared and I could hear banging in far-away campsites again, so I assumed that he had not smelled the marshmallow and had moved on and I did finally fall asleep -- but it was not one of my more pleasant nights.

The next night was The Wet Night. Only Paul woke up dry in the morning and a smellier bunch of sleeping bags you couldn't find!

While we're on the subject, I guess I should go into the more basic parts of our trip -- that having to do with normal bodily functions. Or so they'd have you believe. Tom's introduction to the world of the outhouse was rather memorable. It's kind of dumb to have "men" and "women" signs when they are just metal smell boxes in the middle of the wilderness, but they do and, of course, boys being MCPs would only go in "Men."

On our first trip to "Men" it was occupied by a man who must have a problem -- only someone with a problem would spend that much time in an outhouse! He finally emerged, looking a little embarrassed (but definitely relieved) and Paul went in while Tom hopped around clutching everything below the belt and calling to Paul to hurry up. Paul was yelling a blow by blow account to Tom: "Just a minute now, Tom...oops...no, it'll be a little longer...OK...almost ready...I'll be right there, Tom." Through all of this, Tom was turning green around the eyes and looking like he was in great pain and the fellow behind him in line was trying very hard not to giggle. Finally, Paul emerged and opened the door for Tom, who stepped inside, took one whiff and said, "I think I don't have to go after all," which caused our friend to break up. I missed David's introduction to the outhouse, but he told me in no uncertain terms that it was "yucky" and "scary."

So for the rest of the trip, David would just "go" wherever he happened to be -- right outside the tent, in front of the stove while I was cooking dinner, at the campfire program. Just let nature take its course. Tom never even bothered to pee anywhere but in his pants or his sleeping bag.

Thursday was the one day we didn't have any long trips in mind, so, of course, it was the one morning everyone was up at 6 a.m., the hour before the sun comes up, when even the potty seats have frost on them and all the wood is too wet to build a fire. It's the hour when children's crying voices vibrate through the still wood and you hiss "shut up or I'll clout you!" Paul put on and took off his shoes about 6 times, as he couldn't decide whether he wanted to be in or out of the tent. We finally convinced them all that it really would be warmer in the tent and, as the sun shone over the trees, warming us all, they went back to bed.

Camping with kids is like beating yourself over the head. It feels so good when you stop.
Posted by Bev Sykes at 12:02 AM

You are brave -- to go camping with five little kids!

The answer to the scoutmaster would have been, "One of them. Have you seen the other four?"

Or the classic Yiddish grandma, whose grandson was rescued from the surf: "He had a hat..."