Well, it wasn't really like going to the principal's office, especially since the two people I was meeting with were young enough to be my granddaughters.  But it was a serious meeting.  They have noticed, as have I, a decided step down in my mother's cognitive function.  They feel it is time for her to move to the memory care unit and I wholeheartedly agreed.

We talked about particulars and dates.  I asked about how this ordinarily works and they said they find it better if someone takes her out for the day while others move her stuff so that when she returns, she goes directly to the memory care unit and, God willing, her memory deficits will cause her to forget that she was ever anywhere else.

So I hope to do this while Jeri is here next month, because things are usually better when Jeri is along, though today she could not remember either Ned or Jeri, but that will pass when she sees them again

One of the HUGE advantages is that we can move her into an apartment that is as bare as possible and maybe she will stop worrying about "all this crap."  All the crap will be packed into boxes and stored until things settle down and I have chance to go through them.  I will also move most of her furniture into storage, since she's moving into a one-room studio that is small enough that I'm thinking of getting her a new, smaller bed (she now has a king size).

I took another tour of the memory unit, visiting the 3 apartments that are currently vacant.  I chose the largest (slightly larger) and brightest and will sign paperwork on Saturday.  I then told her what we were going to do, knowing that she would immediately forget.  I also knew that she would not (a) understand or (b) approve.  I was right, but I didn't dwell on it.  I just wanted it to be said once.

So all that done, I went to the apartment and found her sleeping in bed, as usual.  I had bought more "junk food" for her for when she doesn't want to go to the dining room (cookies, nuts, and chocolate). I convinced her that she would like to go out to a restaurant for lunch for a change.  And I actually got her up, dressed, and outside.  She was pleased to see the rose garden in front of the building.
Then we drove around looking at gardens in Davis.  It seems every other house in town is having gorgeous displays of my favorite wildflower - poppies! 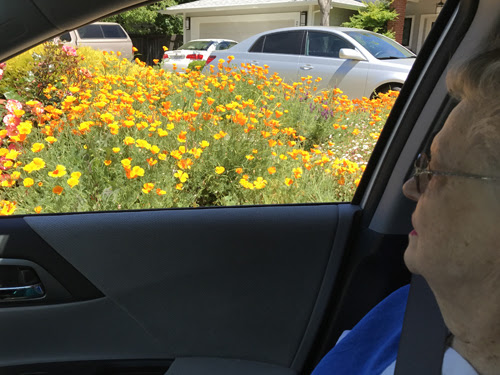 We passed by my house (which she has never seen before--and why have I never invited her to come and visit?) so I could show her the irises growing in the front yard.  They came from bulbs I took out of her sister's garden after Marge's death oh so many years ago (at least 30, if not more).  She said that was "interesting."

Then we drove to Denny's in Woodland, 10 miles away for lunch (cheapest sit-down restaurant I can think of that is also nice). 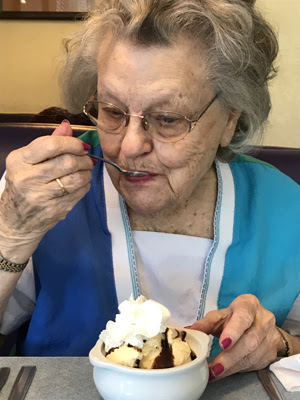 She often does not go to lunch at Atria, frequently tells me she is sick to her stomach and can't think about food (as she did this morning), but at the restaurant she managed to finish a whole bowl of chicken noodle soup and both halves of a toasted cheese sandwich, which I consider somewhat of a triumph....plus ice cream for dessert!

It was a pleasant lunch, answering the same questions over and over again, but she seemed in good spirits and best of all she was out of Atria for a few hours.

Melissa and Brianna, the Atria staff concerned with her care, tell me that in memory care each resident is checked on every two hours.  Also, since her new mantra seems to be that she needs to be doing something to help someone (instead of "I know I should be doing something but i can't remember what"), they can probably find a job for her to do every so often so maybe she will feel like she has a bit more purpose than she has had in a very long time.  At least that's my pipe dream for the day and it makes me feel better.

On the way home, I stopped at the strawberry stand to buy some strawberries 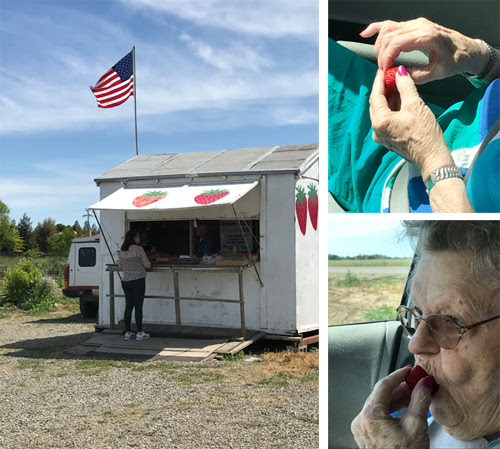 She didn't recognize Atria when I drove up, mainly, I think, because I came in from a different direction than usual.  She seemed at a loss when I told her to get out of the car, handed her her keys and told her that if she couldn't remember where she lived to ask someone.  I felt like a neglectful daughter.

But it was a good day and the first step has been taken to move her to what I sincerely hope that after she settles in will be a better place for her now.  A long time friend of hers told me he called her last week and she had no idea who he was.  Very sad.
Posted by Bev Sykes at 1:28 AM

I'm so sorry, but I know you feel that a weight has been lifted off your shoulders since the decision has been made. Lots of Tennessee hugs!