In My Easter Pajamas

It was 3 p.m. before I realized I was still in my pajamas.  I waited until the movie Easter Parade was over and then the plan was to get my mother and bring her here for a roast leg of lamb dinner.
I should add here that this was the line-up of movies on Turner Classic Movies today:


I love Judy Garland, but how did she get into this list???  Still, I had not actually sat and watched the film in a long time...it's one of those movies I know so well, I can put it on as background while I'm doing something else.  But today, I sat and actually watched it.  It was like seeing it again for the first time.  A nice way to spend a couple of hours on Easter.
I had been mentally going back and forth all afternoon about whether or not I would actually bring my mother over here for dinner.  In the early afternoon it rained, moderate strength.  I knew she would not want to come out in the rain, especially since holidays mean nothing to her any more and she had no reaction on Friday when I told her I would bring her here for dinner on Easter. 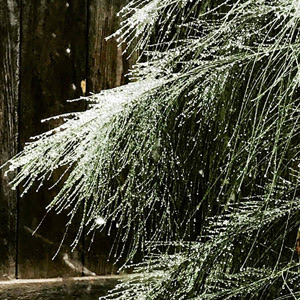 The rain finally let up and there was just a drizzle, which looked beautiful adorning the tree outside my kitchen window, but it still was wet and I was getting more and more convinced that I shouldn't try to get my mother.  I knew she would not remember that I said I was going to bring her here, and was not aware that it was a family holiday day, so I finally decided not to get her.

Then I got dressed.

"You're not wearing your pajamas," Walt said, in surprise, around 5:30.
"I decided to dress for dinner," I told him.

Mother or no mother, I went ahead with plans for dinner--a roast leg of lamb, Cousin Nora's recipe for peas (from Ireland), and mashed potatoes, with salad.  All was delicious.  I wish lamb weren't so darn expensive.  It is my favorite of the red meats.

It was just Walt and me for the holiday, and we spent it watching the Beverly Hills Dog Show on TV, which was won by Ripcord, a gorgeous Doberman. 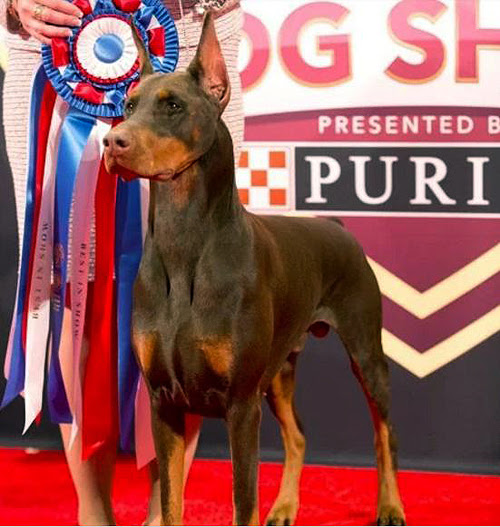 I've never been a doberman fan, but this guy was so strong and regal looking, it's easy to see why he won.

Well, actually no.  It's not easy to see.  Every time I watch a Best in Show competition, marvel at the judges who aren't judging one dog against another, but judging the look of one dog against the standard of the breed.  There were some beautiful dogs, one in each category, competing for the top slot.  My money was on the English Springer Spaniel, but I was happy for Ripcord and his owners.
So our Easter came without any bunnies, but with lots of dogs and a bit of lamb, and that was OK.

Today I'll stop and visit my mother.
Posted by Bev Sykes at 8:25 AM