My nightmare began very innocently.  This laptop wakes up like an old lady getting out of bed in the morning.  V-e-r-y slowly.  It has to test out all the programs and stretch its arms and legs and moan and groan about the aches and pains, but eventually come to life.  Even under the best of conditions, it operates very slowly, like it has arthritis.   And it is so old, it does not multi-task without a lot of complaining.  It was taking so long yesterday that I decided that re-booting it (my version of "kicking it") might help.  So I rebooted and up came the lock screen asking for my password.  I confidently put in what I knew was the password but it wouldn't open.

I have about four different passwords, each with a combination of letters and numbers, which I use for everything.  They are all easy for me to remember, but sometimes I use capital letters or I add punctuation.  I tried every password I had in every iteration I could think of and the machine stayed stubbornly locked.

I went to Facebook to ask for help and got some great suggestions, none of which worked.  Then I went to the internet to ask how you unlock a laptop when you have forgotten the password.  I found lots of suggestions, all of which had been made by my Facebook friends except the final one -- completely reinstalling the operating system, which would erase everything on the computer. (now that I think of it, how do you do that if you can't open the machine in the first place?)

Anyway, all day long, I fretted about my situation and tried to figure a work-around for Funny the World, using Walt's computer to at least leave a message that I wouldn't have any entries until we got back home again.

It was when we were driving home at 10 last night when a lightbulb went off.  I remembered the password.  I got this machine in 2003, right after I returned from Australia and in choosing a password, I wanted to use one that would be impossible to guess.  I see McGee on NCIS or Garcia on Criminal Minds  or Chloe on 24 figure out passwords instantly--the guy's birthdate, or his cat's name, or his mother's phone number.  Something easy to guess eventually.  I was smarter.  I chose the address of the house Peggy was living in when I went to Australia.  I was so excited that the first thing I did when we got home was to try that and....voila!  Open Sesame.  I was in.  Now I have written the password in several different places, told Walt and Alice Nan and now you.  If I ever lose it again, you don't know what the address is (or was...she hasn't lived there in years), but you can tell me and I'll know.

Other than that, Mrs. Lincoln....  it was a full, fun day,  It started at the crack of dawn, heading down to Brianna's school for a 9:30 a.m. concert by the first, second, and third graders.  Being a 3rd grader, Bri was toward the back, but was easily visible when we got there because the younger kids hadn't arrived yet. 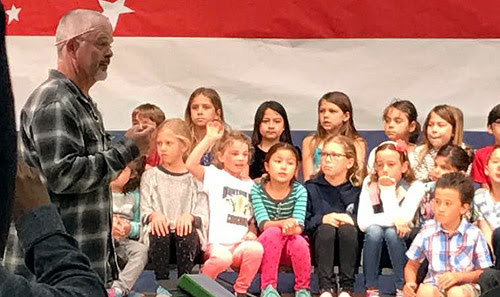 Eventually the stage filled up and the kids put on a half hour show.

Very cute.  Laurel wasn't able to come, so I took video and pictures so she could see at least part of it.
After it was over, back here to Alice Nan's house, where Walt and AN took naps, I took a shower, and continued to fret about my password.

At 3, we went to the football field for Brianna's flag football game.  If the concert was cute, the football game was cuter.  It was not difficult to pick Bri out of all of her teammates..,.she is at least a head shorter than all of them, but she's fierce and watching her run the ball down the field was really fun. 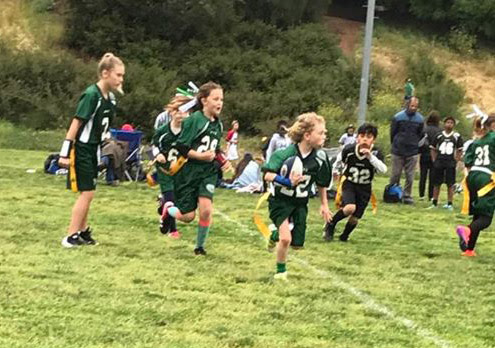 It was a girls' team playing a boys' team and the boys were better (but they don't keep score yet).  Bri stole 3 flags (equivalent of making a tackle).  In the end, it had been a lot of fun and we came back to AN's house to rest up while Laurel and the girls went to the store.

Eventually we went to the house for Family Movie Night.  They were watching ?Fantastic Beasts? which seemed awfully dark for kids and I never did figure out the plot, but we we enjoyed visiting. 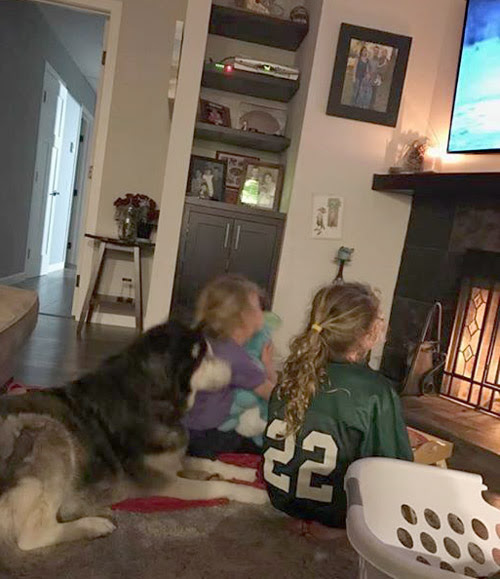 Tom had been in Boston and was due home, but never did get there by the time we left.

And then the computer finally leaping to life ended the day on a high.  I woke up at 2:30 this morning to write this and if the arthritic old lady ever lets me into Facebook to retrieve photos to add to it, I can finally post it and go back to sleep.