We were so busy yesterday sitting around watching the grandkids, we needed today to rest and recover.

I had collapsed and gone to sleep around 10 and slept through until 5.  My plan was to change to the recliner and go back to sleep, but I kept thinking about what I was going to write for Funny the World and that woke me up, so I got up at 5 and wrote the entry.

Walt and the others went off to Mass at the Santa Barbara Mission, so I had an hour and a half here by myself, which I wasted by watching talking heads and playing games on my cell phone.
They came home and Joe fixed breakfast, then settled in to watch The Masters.  I was feeling sleepy, went to lie down on the couch and woke up at 3.  Joe and Alice had gone off to a memorial.  Walt was watching The Masters 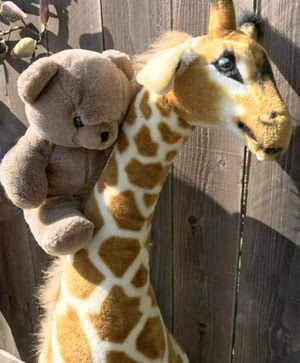 Not being into golf, I finally did what I wanted to do since we got here, which was to take a picture of Benny riding on the neck of Alice Nan's big giraffe.

I'm really happy with how the photo turned out and you can't tell that Walt is actually holding the bear in place.

Anyway, I think Bri will like the photo when I send it and will recognize the giraffe instantly as belonging to "Auntie Nan."

I joined Walt in watching the end of the Masters.  I don't know any of the competitors and know nothing about golf, so the exciting 18th hole did nothing for me, but I did watch it, and later the awarding of the famous green jacket.

When Alice Nan and Joe returned from the memorial service they were attending, they immediately sat down to watch the recording of the Masters they had done while they were gone, so I got to watch it a second time.  (Bui I did not inadvertently say anything about the game or the winner.  Yay me!)
We got a not-surprising text from Tom saying they were late leaving Laurel's mother's birthday party and would not be able to have us come over for dinner tonight, but would see us the next time we came to town,.

In all honesty, I was relieved.  The girls had a very busy day with their other grandma and would be exhausted, and thus all wound up and I suspect things would not have gone as well as they did last night.  Last night was one of my favorite grandma nights ever, so I'd rather leave town with those memories.

I spent time getting caught up on current events, like Robert Reich's marvelous column about how Trump creates fog to try to deflect from the biggest potential scandal in American history, Russia's involvement with the election and with, it appears, to be just about everybody on the Trump team, at one time or another.  Fortunately there are legions of people not letting him get away with it, and insisting on holding his feet to the fire.

There was also the introduction to the excellent LA Times series of editorials slamming Trump.
Then there were statements made by Pope Francis about the hypocrisy of Trump supporters:

The article goes on to conclude


So it appears that I am slowly easing back into real life, which will involve a ton things recorded on the DVR while we were gone.

I know how Alice Nan and Joe felt about rushing home to watch the Masters!
Posted by Bev Sykes at 8:35 AM