I brought two big bags of books to Logos today and Walt was able to find parking right in front of the store, so he carried them in for me and then decided to browse.  By the time he and Sandy left, there was a dad there with a son who was about 2-3 (probably 2, but nearly 3).  Dad wore a shirt with a big smiley face on it, his son was in a shirt with the Count (from Sesame Street) on it and "1, 2, 3."  It looked homemade.  Dad and son sat at the front t able reading, and son would run back to the kids' room when Dad finished one book and get another. Mom later joined them at the table. They were probably there in total about 20 minutes.  When they left, Mom bought 8 kids' books, 2 contemporary fictions and a health book.  My first and biggest sale of the day (nearly $50).

They were there with friends and the friends bought a kids' book and 4 sociology/political books which, at $30 was my second biggest sale of the day.  The woman handed me a stack of 7 boks from all over the store that she was not buying.  Usually people put them back rather than hand them to me!

When I got the books settled in the back room and came out to the store, I found an older man sitting on a ladder in the back corner of the room, reading.  The store was looking like a library today.

A British guy with a big backpack rushed in, looked at a shelf of books, told me he was just curious because he had just arrived in town, and rushed out a few seconds later.  About 10 minutes later I saw him back again, this time looking through the bargain books outside.  He never did buy anything.

A grandma arrived pushing a baby stroller and with a lovely big dog on a leash.  "Can I just hang out here for about 45 minutes so he can sleep?" she asked, as she pushed the stroller to the back aisle of the store and settled herself in at the desk with me.  She said the baby was having sleep problems and she didn't want to chance his waking up because of the noise of the street.  The dog, Buck, was very nice, very well behaved.  We made friends instantly and he kept coming to me and putting his head in my lap.  The woman and I talked, awkwardly off and on.  I kind of resented her intrusion and wished she had settled at the front table with a book.  The baby finally woke up and was not. happy.  He cried all the way out to the street again, despite grandma's giving him something to drink and trying to hold him, Buck's leash, and push the stroller all at once.  (She didn't buy anything, by the way) 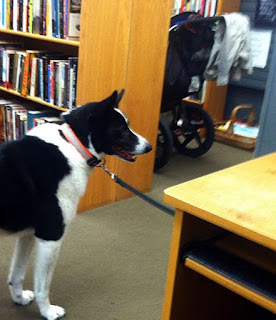 As they were leaving a guy came in, who tried to be friendly to Buck but buck did NOT like him and shied away from the man's outstretched hand.

About this time,  broke the cash register.  I went to ring up a sale and brushed some key.  I heard it "ding" and afterwards I couldn't get the cash register to record anything or to open.  I tried everything I knew from turning it off and unplugging it, but nothing worked.  I finally had to call Susan, who told me how to turn it off properly (not the "off" option) and after that it worked fine.

A woman popped her head out of the kids' room to ask how much the books were.  She didn't buy anything, but her friend handed me an unopened bag of Sun Chips someone had left in the room.  They were delicious.

A gay couple who come in regularly looked around for awhile and finally bought a book called "Soutine," about a painter in Paris.

My friend arrived at 5.  After two weeks of finding nothing to interest him, he left with a sci fi book.  I didn't notice the name, but it had a forward by Ray Bradbury. 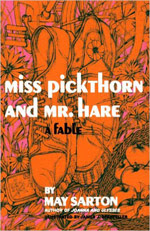 Two women came in together.  I decided they were probably sisters.  The younger one wore a shirt with a full picture of the cast of Boy Meets World (I had to ask her what it was).  Her older sister had long hair, almost to her waist and lovely purple trainers.  The younger one chose "Miss Pickthorn and Mr. Hare, a fable" but neither had enough to pay for it, so they were going to go away and get money from their father, which they did and the young one returned to pay for the book.  She told me that she doesn't read much and she'd like to get into reading, so she likes short books (this one is 96 pages long).

This was one of Amazon's Best Books of the month.  Author May Sartorn, who described in 1995, is described as "an acclaimed poet, novelist, and memoirist."  I'd like to be an "acclaimed memoirist"! 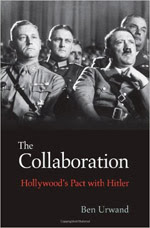 The next customer was a woman in a hurry, who rushed in and went right to the show biz section to pick out "The Colaboration:  Hollywood's Pact with Hitler," which tells a story I certainly had not heard before.  "To continue doing business in Germany after Hitler's ascent to power, Hollywood studios agreed not to make films that attacked the Nazis or condemned Germany's persecution of Jews."

I commented on how quickly she had found a book she wanted and she told me she had seen it in the store the day before and was coming back today to buy it.

She appeared, from her accent, to be German and when she handed me money, she had no problems with the paper money, but struggled with the coins.  I identified with her difficulty  When we are in a foreign country, I often either pay with too much money and get change or I just hand over a pile of change and have the clerk take out what is needed.

The last woman bought a book on folk art.  And that was the end of my day!
Posted by Bev Sykes at 9:06 AM

For taking up time and space granny should have purchased something . I mean really how many places welcome dogs besides the pet stores ? goodness .