Walt and I and the dogs don't do a lot as a family, unless you count the Sunday morning ritual of Walt's sharing sausage with both me and the dogs when he cooks his breakfast after Mass. I love that tradition -- so do the dogs.

But on Sunday evening, the four of us gather around the radio in the living room and listen to Says You. 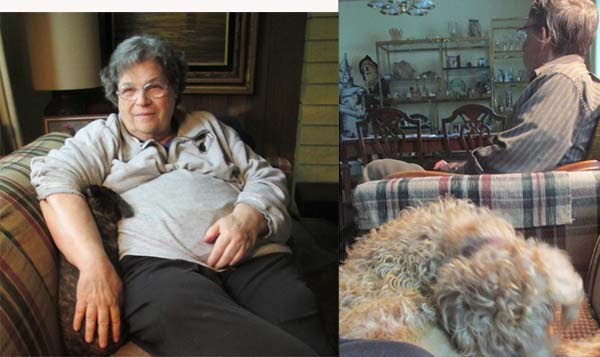 Walt will come into my office and let me know that the show is about to start and I will go in and settle on the couch.  Pretty soon, Lizzie comes sauntering in and climbs up onto the couch with me.  Next thing you know Polly has come in too, demanding to be on the couch as well.

Today, Polly buried her nose in my armpit, like she used to do when we first got her, while Lizzie, at the other end of the couch, licked herself furiously throughout the entire hour of the program.

I'm just kind of getting back into Says You.  It's been my favorite show for many years, and we even have recordings to listen to in the car, but when Richard Sher died a year ago, a piece of me died.  Richard was the co-creator, co-writer and host of the show and he wasn't even my favorite of the seven regulars.  In fact, he often irritated me.  But he had a certain style and a certain tone that would now be gone forever.

The show must go on and the role of moderator of the show was taken over by one of my favorite panelists, cable radio personality Barry Nolan.  But he wasn't Richard and I found myself avoiding the program, even though all the other panelists, including my "friend" Tony Kahn, continued.  (I say "friend" because we have interacted a few times, I did some transcription for him, he interviewed me once, and I think of him as a friend, though really we are just friendly acquaintances).

The few times I actually sat down and listened to the show after Richard died, it just wasn't the same and more and more often, I didn't join Walt in listening, and, in fact, he finally stopped listening in the living room, but just turned on his radio upstairs so he could listen while he was working.

The last few weeks, I have been listening again and able to enjoy the "new" Says You.  Each week there is a flashback episode, a bit of one of the old shows where Richard is the host and each time I get a little teary.  It's really very silly, but I don't do "change" well!

But it's a nice "family thing" that Walt and I do with the dogs and the dogs love that we are immobile and can give them undivided attention.

Next week, Says You is returning to San Francisco for a live broadcast.  We have gone to many of these live tapings and enjoyed them tremendously.  I can't remember if they came to the city last year or not, but if they did, we didn't go -- I would still have been in my "grieving Richard" period.

But we have tickets this year, so we will once again be able to watch the show being taped.  They always have a local musical group to do incidental music at two points during the show and my very favorite taping was the year that the Lamplighters were the guest musicians.  Talk about two important parts of my world intersecting when I least expected it to!
Posted by Bev Sykes at 12:00 AM

Email ThisBlogThis!Share to TwitterShare to FacebookShare to Pinterest
Labels: Says You