Ned came to do a massive clean out of my office today.  He told me to just sit somewhere and do something and he would do it all.  And he did.  The only direction I gave him was that he could only clear out one half and had to leave my desk half alone, since he would not be back for 2 weeks and I couldn't go two weeks with a makeshift office

All the while he was hauling boxes and furniture out, Walt kept asking me if I'd read my friend Debra's column in the paper this week.  I finally had him hunt for it and as Ned was still hauling boxes and furniture out, I read it.  It's called "It really is going to take a year to clear my clutter" and talks about a new program she has found to help her clear out her clutter.  She was starting with her clothes closet, and I was dealing with paper stuff ("all this crap") but it amounted to the same thing.
I immediately sent her a note saying how much I identified with just about everything she wrote.  She replied almost immediately and I loved this:

Those who say "Oh, I can help you clear it all out" just don't GET it.Clutter is FEELINGS.

That's IT.  That's why it's easier to clean up someone else's junk than your own, because you have no emotional attachment to it.  But when you have a room like this that contains everything high school memorabilia, to college stuff, to wedding stuff, to having babies stuff, to kids growing up stuff, to dead friends' stuff, down to today's stuff, you just keep finding stuff that you know is crap, but how can you throw it away?

How do you throw this away? 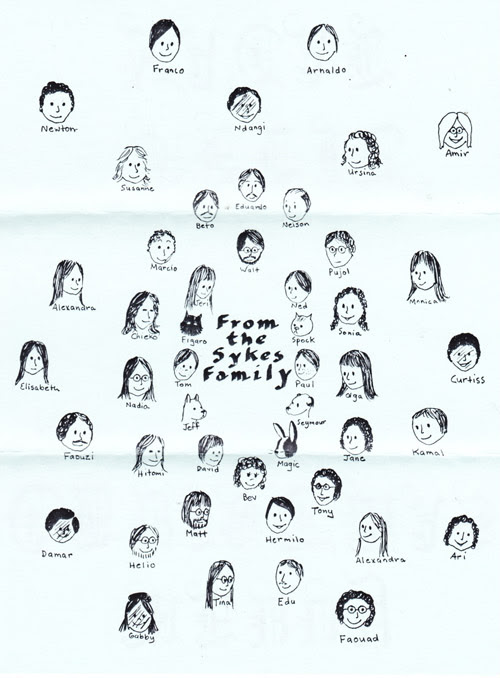 It's Jeri's drawing of all the foreign students who stayed with us in 1981.

I thought I could at least get rid of ONE thing when I saw Ned brushing cobwebs off a small pillow.  "I don't need that," I thought, seeing that the two corners of it were torn, I think by a dog.  But then he brought it in and it was this: 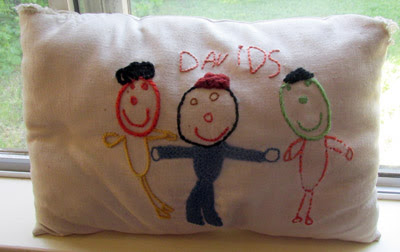 I think it was David's teacher who embroidered this drawing of David's onto a pillow.  Now how do I throw that away.  Or this photo of Tom with one of our favorite Brasilians, Marcio de Vassimon, standing in the snow. 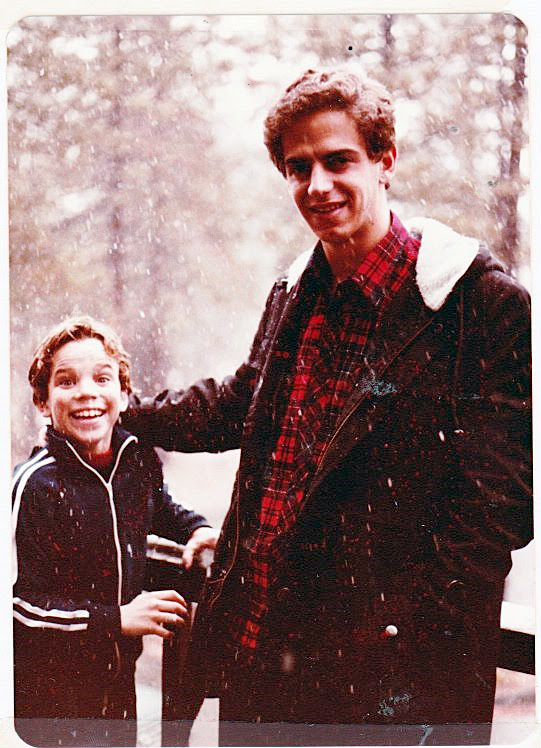 How do I throw away the dozens of things I have already looked at today, and have not yet made a dent in what is to be looked at.

Progress has been made, and Ned let me keep half my office as is for now.  But the the other half of the office went from this: 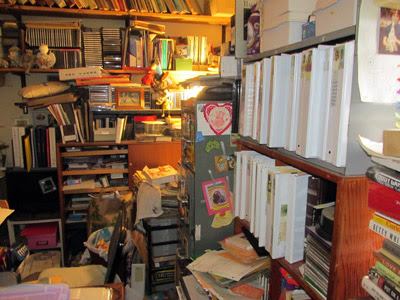 Of course the living room (i.e., the "staging area") now looks like this: Ned says that my task between now and when he returns in about 2 weeks is to fill up that brown garbage can at the right twice.  Then we do it all over again with the other side of the room.


I can't tell you how grateful I am to Ned for forcing me to do this much needed and long-overdue task.  But, as Debra says, clutter is feelings and I know that there is going to be much grief as I throw away some of this lovingly saved "crap."
Posted by Bev Sykes at 12:00 AM

I can sympathize, empathize, whatever, of course. The best/worst part of my decluttering was that it happened so fast. I only had/took the time to decide what I wanted in my much smaller apartment - and the rest of it was gone. Fortunately, as I knew would be the case, I haven't missed much. Occasionally I do think of something and wonder which one of the girls or grands took it, but I'm not losing any sleep over any of it.

Except for things of David and Paul, of course, look at it, cry, smile, hugs it, and throw it in the brown garbage can.