Since its inception in 1909, Picnic Day has become the crown-jewel event of the UC system and the signature event of UC Davis. Believed to be the largest student-run event in the nation, Picnic Day showcases the richness of diversity and achievement at UC Davis and the surrounding community in the areas of research, teaching, service, and campus life.

Picnic Day, the annual Open House for the University of California, Davis, is one of the largest student-run events in the nation. This hallmark event has been designed to showcase and celebrate the richness of campus life, the diverse achievements of UCD students, staff and faculty to provide a day of education, information and entertainment to all who attend. There will be more than 200 events throughout the campus and an estimated 50,000-60,000 visitors attending this special event. This long-standing campus tradition began in 1909 when the University Farm invited the surrounding community to view their new dairy barn.

The above was from a press release before the 100th anniversary of Picnic Day.  This year was the 107th anniversary, celebrated on Saturday.  We attended some Picnic Day activities when the kids were younger.  They were in the parade for the diving team, and maybe the children's theatre, for a few years. I think Walt drove a truck for one of the floats one year.  But as the kids got older, interest in Picnic Day waned, in favor of Whole Earth Day, which was more to everyone's taste (to say nothing of the fact that Lawsuit performed on Whole Earth Day).  But the rest of the town still comes out in force to celebrate Picnic Day, and while I usually stay in the house and out of the crowds, this year I worked at Logos.  I had changed my work day so I could attend the Sutter lunch earlier this week.

The first hint that this might be a "different sort of day" was the overflowing trash can and then the two port-o-potties next door to the store. 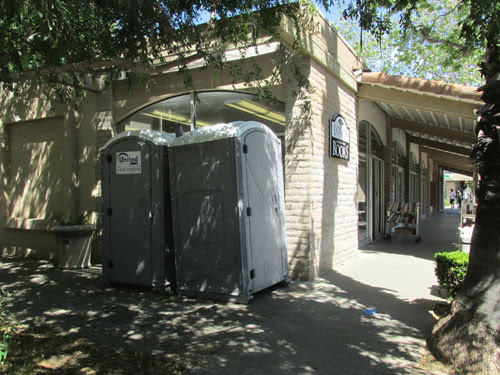 I expected it to be a slow day, but it was surprisingly lively.  Sales were about normal, or maybe less, but there was never a "down time" when nobody was in the store, some folks just popping in to have a glass of the free lemonade we had made available for people who wanted to get out of the heat. 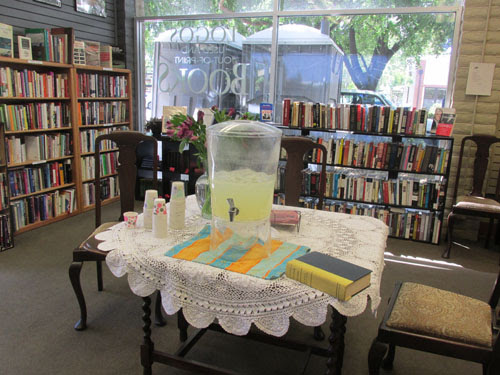 Since the day was so long, I'm just going to hit the more interesting customers, like the first guy who bought a copy of "Atlantis" and said he was going to go home and take a nap.  He had marched in the parade and was tired.  When I asked him which group he marched with he said "the classical studies group."  Yes, Davis has a parade with groups like "classical studies" !!

Another guy came in playing with a yoyo.  Made me realize it has been many years since I'd seen anyone with a yoyo.  He was quite good, too.

A guy came in with a big box of candy and asked if I wanted to buy some.  I declined.

A lot of the interesting stuff was happening outside.  A guy walked by with a tuba, groups of police in 3s or 4 and once a group of 8 walked past.  There was a continuous flow of traffic, mostly groups of laughing students, who seemed to get louder as the day wore on...I wonder why...?  I'm sure it had nothing to do with the pub around the corner. Two customers came in and asked if it was always like this on Saturday.  Neither was from Davis and didn't know about Picnic day.  I told each of them they had arrived on the busiest day of the year.
Two folks walked by, smiled and waved at me and shouted "Hi, Maria."

A girl came in wearing a flowered dress with a very short skirt and boots above the calf.  She had a demure black hat on and when she passed by me I realized that the black hat had ears on it.  Cat ears.  Her backpack was a black cat's head.

A girl with a balloon attached to her backpack ought a copy of Teen Feng Shui.

A guy who looked like our foreign student from Croatia came in.  He wore two pairs of glasses, one on top of his head.  Both pairs were attached by cords.

Two guys came in together and I swear they are twins.  Both were very tall and had the same features, but one was neatly groomed and the other had long hair and a beard.

A Hispanic man had a baby in a stroller and as he walked out, he was trying to push the stroller while he was holding a bottle for the baby to drink.  I should have run after him and offered him the front table to sit until he finished giving the child his bottle!

Two couples came in, one man with a very protuberant belly.  Both men looked to have much younger wives.  The bigger man bought a cookbook of recipes from Florence (lavishly photographed) and I asked him if he had ever been there.  He said that no, he had not, but their daughter was there right now and he figured he could enjoy her trip through Florentine recipes.

More noise outside as three guys were passing by dancing to Reggae music.  Another guy had a balloon and a potted plant.  Two guys had four guitars.  Many girls walked by with flowered headband on their heads. One girl was wearing a very flimsy dress with a light and airy chiffon skirt...and heavy men's work boots.  (It was like going back to Berkeley in the 60s!)

Eliza came in with her baby sleeping on her chest again, but the baby woke up this time. She's 11 mos old now and just adorable, flirting with me over the to of the baby carrier.

So it was a very unusual day, but fun.  And, it being Saturday instead of Thursday--and he having more sense than to come to Davis on Picnic Day, my friend did not show up.