I am so glad that Pat suggested in the comments section yesterday that I contact the United States Bicycling Hall of Fame, here in Davis, about my godfather's scrapbook of his biking career.  Some of the articles date back to the first decade of the 20th century.

I sent a note off to the email address on their web page and was amused, but not surprised to discover that the person who answered me was our good friend Bob Bowen, the good will ambassador of Davis.  We've known Bob since our kids were little, the kids grew up with him.  They marched in holiday parades that Bob led. They were all in the first Davis Children's Nutcracker, which was Bob's brainchild back in 1977 and is now a beloved city tradition...they all performed and some went on to be directors or tech people. Paul did man on the street interviews for local TV with Bob. Jeri, Ned and Paul at one time or another worked for Bob at one or the other of the two theaters in town. (Paul was managing one of the theaters at the time of his death). He's been part of several theatrical events we've been part of.

At the time of Paul's death, Bob's son (who is now in college) was 5 years old and had been a particularly good friend of Paul's and was very upset by his death, I remember his mother telling me.

So now I have this piece of biking history and who is there to talk to about it? Bob.  He's very interested and says they even have an ongoing display on bicycle racing.  Right now, though, he is helping to run Picnic Day, the biggest event in Davis (it's really a university event, but it involves the whole town).  He says for him. Picnic Day, April 15 this year, ends in May (since he'll be working on clean up for a couple of weeks), but when that's behind him he'd like to meet with me and go over my Uncle Fred's scrapbooks and see if they can use them.

I thought all of the scrapbooks contained a mixture of biking and boxing and vaudeville, pictures of all 3 brothers, but one of them is just biking, so I will give that one to the museum, if they feel they can use it.  It would be wonderful for my godfather to be part of a museum display, even if it is only in Davis.

At some point I hope to offer my grandfather's memories of his days in vaudeville to the Performing Arts Archive in San Francisco.  They already have all the Lamplighters memorabilia that we collected when we were writing the two histories.

I had lunch with my mother this morning and then went to the post office and mailed off three pocket letters, two for here in the US and one to Malta. (The clerk at the desk in the P.O. said he couldn't remember what he knew of Malta and would be thinking about it all afternoon and look it up when he got home--he thanked me for giving him something to think about while he worked!).  None of the envelopes cost nearly what I feared they would.  Even the one to Malta was only about $3.50.

I'm almost finished with a new one, which is going to a 79 year old woman in Indiana and I guess the idea with this swap is that it becomes like a pen pal thing, where I write to her, she answers me, and I answer her, and all of our letters are in the form of pockets.  With that in mind, I designed an introductory "about me" page and each pocket represents something important in my life. 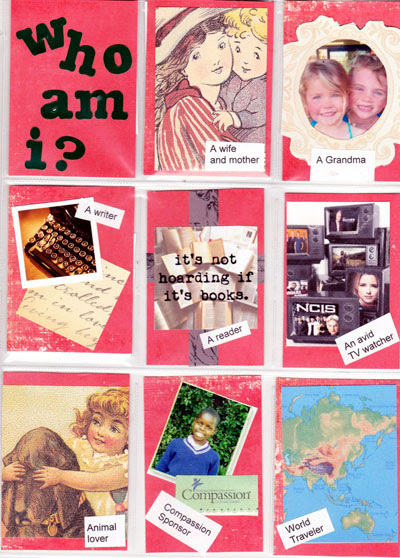 (incidentally, the graphic for that "Avid TV watcher" pocket is a graphic I did with PhotoShop.  I found a picture of a stack of TVs and put pictures of some of my favorite TV shows on them.  I'm actually kind of proud of it.)

Tonight we went to see Newsies, the touring Broadway show.  Lively and fun to watch, though with the horrendous acoustics in the theater I missed about 90% of anything they sang.  Fortunately, it's a fairly simple story and the lyrics aren't necessary to understand anything.
Posted by Bev Sykes at 1:50 AM