We had sushi for dinner tonight.  Sushi Unlimited has weird names for their rolls.  These are, left to right, River Cats, Lincoln Hills, and Garlic delight. 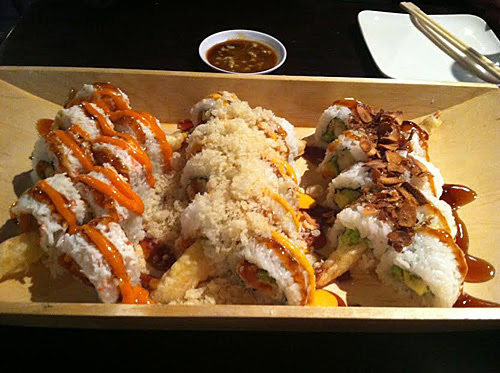 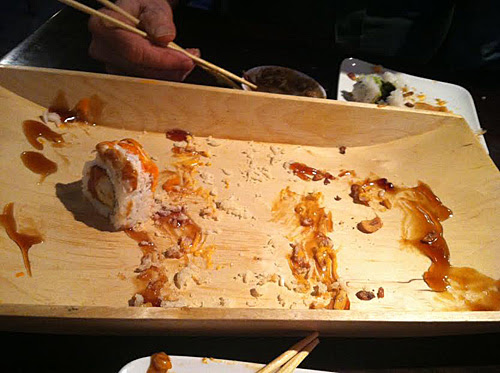 It's what we do on Paul's birthday.  My Facebook history (as well as my FTW history) is full of pictures of sushi taken at various years in the past.

But before dinner, there was Logos. Such a slow day.  In the entire day, we had $69 in sales!  I met Mike, a brand new volunteer, covering for Sandy while she and her wife are on another vacation.  Mike is delightful, ebullient and when he left he left an orange for me.

Customer Doreen was there when I took over for Mike.  She was looking for a dictionary that would translate common phrases.  I found one for her and also said that if she liked English an words, she should try Bill Bryson's "The Mother Tongue."  After a long time, she left without buying anything, but promised to return.

A tall, black curly headed Aussie said that every time he walks outside today it rains, when he come into the store, it stops.  He bought a copy of "Tacitus."

Another dressed in black tall guy reminded me of Rasputin and when I found out his name was "Gregory" an an unpronounceable last name, perhaps a relative....?  He bought 2 bargain books and a book on Zen.

A woman in a chartreuse raincoat and a big walking boot didn't buy anything but had lots of questions -- who is the current artist? conversation evenings? music?  She signed up to be on the mailing list.

It was my day for debonair,  The first guy looked like he walked out of the pages of "Fifty Shades of Grey."  Tall, black wool overcoat over a grey suit with a purple shirt. a grey scarf casually slung around his neck. and highly polished fashionable black shoes. (He bought a book called "Krakatoa." He was surprised to find I didn't have small plastic bags and seemed unaware of the Davis bag law and couldn't figure out why we had it.) Another guy was in a full business suit, with dazzling white shirt.  You don't often see that in Davis.  He carried a small brown parcel around with him, and was still there when I left. 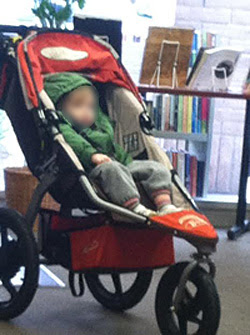 A guy came in with his child in a stroller, so bundled up that he couldn't even move his head and sat there immobile, eyes occasionally looking around, while Dad was looking through some sheet music.

I had a nice call from Jeri, who always checks in on January 28.

Bruce actually came in  the store today, no hat, his green scarf round his dirty white clothes and a FedEx package under his arm.  He seemed to be wearing two pairs of light-weight white pants because the top layer had huge holes in the knees and other parts of the legs.  Not sure why he isn't making his own hats any more.  Maybe he only makes them for sun screening, and there has been no sun lately.  He didn't buy anything.

Peter's friend brought in more books to donations and checked the shelves, disappointed to find so many of his previous donations (mostly math books, I think) still sitting on the shelves.

My friend came at 4:15 and bought a copy of "A River Runs through it"  It was only my fourth  sale of the day!

An Asian girl came in wearing a pink leather jacket, with a pink backpack, pink plaid pleated shirt hiked up in back over her black tights.  She didn't buy anything, but looked colorful.

A tall middle aged guy dressed in somber colors had bright blue tennis shows.  He didn't buy anything but I thought his choice of shoes was interesting.

He was followed by 3 Asian girls, each in new-looking tennis shoes, one rimmed in pin, one in purple and one in black.  One of them bought a Roald Dahl book for $2.61.

Not much happened, not many sales, but it was nice to have the sushi dinner to look forward at the end of it.
Posted by Bev Sykes at 8:08 AM

Email ThisBlogThis!Share to TwitterShare to FacebookShare to Pinterest
Labels: :Logos