I was up until 3 a.m. this morning reading our next book club selection, "A Gravity of Birds." Char finished it two days ago and said it was wonderful.  I had a difficult time getting into it at first, but once I got into the whole story, I couldn't put it down.  I finally did at 3 a.m., but then slept for 2 hours, woke up and went back to reading, finishing it by 8 a.m.  Char was right...it was a great book.  Even if the story hadn't been so good, the author's (Tracy Guzeman) writing was so wonderful that kept me reading.

Sadly, I realized that I can't make it to the book club meeting on the 19th after all...Walt has the car for his dental appointment in Berkeley, I have a lunch date with my former co-worker, followed by working at the hospital.  I'm really sorry.  This is another book I would very much like to discuss with the group.

Around 11:30, we went to the home of our friend Nancianne for a delightful brunch.  There were supposed to be four of us guests, but the other two had to back out for health reasons, so it was just the three of us.  Nancianne was the heart an soul of the Davis Comic Opera Company throughout its 30 year history and so she is a dyed in the wool theater person and we had a good time comparing shows, companies, and people we have known in theater throughout the years.

Plus the meal was delicious, finished off with various types of chocolates.  It was enough to make you want to lie down and take a nap.

So I did.  I knew I had a show to review tonight, so I came home, climbed into the recliner and went to sleep almost immediately (I was going on about 2-3 hours sleep, after all!).  At 5, I woke up, looked outside, saw the sky was just barely light, looked at the clock and thought, in a panic, that I had slept through the night and forgotten to review a show.  Then I realized it was 5 Pm not 5 Am and all was OK.  But I was well rested, for sure.

Neither Walt nor I felt like eating dinner, as we were still full from brunch, so we went off to pick up my colleague, Jeff, with whom we often drive to Sacramento shows. 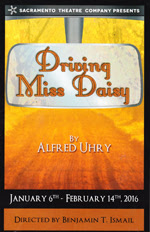 The show was Driving Miss Daisy with the incomparable Janis Stevens.  I first saw her in a show called Master Class, where she played essentially a one-woman show (two other in the cast with minor roles) as Maria Callas.  She was magnificent.

She followed that with a show called Vivien, written by playwright Rick Foster.  The show was such a hit that it went to New York, where it earned a nomination for a Drama Desk Award (sadly, it did not win).

It returned to Sacramento, which was when I first saw it.  I wrote, It’s a very special actor who can bring a legendary figure to life and make it believable, without making it a caricature. ...Now Janis Stevens has come along and provided us a magnificent Vivien Leigh, currently gracing the stage at Sacramento Theater Company,

Seven years later, she was back with Kate, a show written for her, by Foster, based on the observation of our friend, the late Mitch Agrus, that Stevens looked like Katharine Hepburn.  Again, she inhabited the body of Hepburn and gave us another unforgettable production.

So when I heard she was going to be in Driving Miss Daisy I knew it was going to be a wonderful show.  And it was.  With Michael J. Asberry as her driver Hoke, and Scott Divine as son Boolie, this was another hit, though I have to admit I was somewhat taken aback in the opening scene when Boolie tells his mother that at 72 she should not be driving any more and it was time to find her a driver.  No wonder Miss Daisy was huffy at the prospect, says the almost-73 year old writer here!

It was particularly interesting watching the three characters believably age 30 years in 90 minutes.

When the show was over we stood in a critics' circle of four talking about Blue Apron, since I had sent Patti Roberts' name in for a free week trial of food and she, like us, decided to keep it after all.  She and I were so enthusiastic about our experiences with Blue Apron that at one point she thought we were the perfect group to be filmed secretly for a commercial about the service!
Posted by Bev Sykes at 1:13 AM