I was happy to wake up early enough to watch Barr's press conference.  But I fell asleep and when I woke up, talking heads were into discussion of Barr's comments, and waiting receipt of the Mueller report.  "Oh shit," I thought.

I listened to reporters and taking heads all day long and I have to admit that I agree with Rachel Maddow  and I think where things need to go from here is zzzzzzzzzzzzzzzzzzzz
Meanwhile, I heard back from the rare newspaper person (www.rarenewspapers.com), who isn't interested in the Life magazines, but had encouraging things to say about some of the other papers.  I'm not holding my breath.  He has agreed to repay me for postage to send it to him (last time I sent something to someone who wanted it, it cost me $50 and she hasn't even said "thank you" or acknowledged that she has even looked at it, though she did say that she received my package) and if he feels that the condition is good enough, he may pay me more, but I don't know.  I'd just like to know that the papers will go to someone who will appreciate them.  I can't see just dumping them in the trash after they've been saved for more than 70 years!
I am frequently surprised when I go back and check my entries from the previous year, how I am talking about something that I talked about exactly a year ago.  I was going to mention that last night I decided to try an idea I saw somewhere and make Spam tacos, which is just frying strips of Spam mixed with taco seasoning and then fill taco shells with the Spam, cheese, onions, guacamole, cilantro.  It was kind of tasty, but the we are Spam fans around here and I was glad there were leftovers, because I had another taco for lunch today.

But, when I went back to my entry of one year ago yesterday, midway through the entry I talked abuot how I had made Spam musubi for dinner, which is essentially Spam sushi, which we had at a Japanese restaurant and which seemed easy to make (it was).

Obviously Spam is a more versatile food than most people think (though I have not seen Spam with jalapeno sold in this area, though I understand they make it). 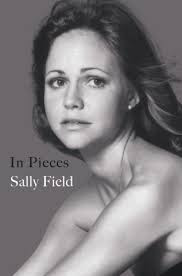 While waiting with bated breath for the Mueller report to be released, I have been engrossed in the autobiography of Sally Field, which someone recently recommended to me.  I was never particularly a Field fan, but I started reading the book and my word was this an unhappy person!

There is nothing happy in the first half of her book was so depressing that if I had quit reading before her joining the Actors' Studio and studying under Lee Strasberg I might never have finished at all.
She was born of an actress mother (Margaret Field), who was also an alcoholic.  Her father left the family and mother remarried stuntman Jock Mahoney, who sexually abused Sally until she was 14.  But even before Jock entered her life, Field had the strongest form of self loathing of anyone I've ever heard.  In remembering her mother, for example, she says, "...It's the same ache I had when I was five, sitting on the bench outside the nurse's office at school, feeling embarrassed and ashamed because I had once again panicked for no apparent reason...I still don't know why grammar school was so agonizing for me.  Still can't figure out whether the agony was waiting for me in the school or I brought it in with me.  Either way, it didn't matter because nothing and no one could distracter or engage enough to lessen the dread I felt..."  She never had a school friend.  Never.

It goes on like that for some 200 pages.  Even when she had a successful TV series (first Gidget and thenThe Flying Nun) she hated it.  Hated everything she did, whether successful or not.  As I read it, I could, for the first time, understand her famous quote on receiving her second Oscar. "The first time I didn't feel it, but this time I feel it—and I can't deny the fact that you like me, right now, you like me!" (often misquoted as "you like me! you really like me!)

The Actors' Studio was her saving grace and she discovered a sense of her own talent.  I have just come to that part of the book and I'm hoping that she will eventually find something good in her life.  I know she has done some very good work on film and I hope as I continue this book, she will finally accept her own talent.

She has not yet met Burt Reynolds, with whom she had a 3 year relationship, which was not easy either.

I keep asking myself why I am reading this book, but I continue.  It is easy reading and interesting, in a very sad sort of way.
Posted by Bev Sykes at 12:00 AM

I have the audio version of Fields' book, she narrates it, I'm interested in hearing it.