No Perks of Aging

This is what happened one day last week.

1.  I woke up to an email saying that a friend who had a stroke recently had died the day before.  We've known this woman for most of our time in Davis and were all in the Davis Comic Opera company.  She was one of the sweetest people you'd ever want to meet, though as she got older, she became more scatterbrained.  She was instrumental in organizing and running a group for the mentally ill for many years and "Ciizens Who Care," which provides help to the frail elderly and their caregivers.  Here she is with her husband, following the Citizens Who Care winter concert that they organized and ran until he died in 2012. 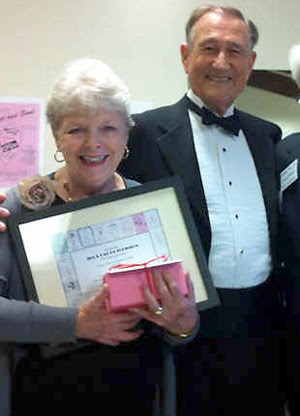 2.  When I signed on to Facebook, there was a note from Ned's friend Greg's sister, saying that their father had died the night before, after being ill for many years.  It does give one pause to realize that people are saying he had "lived a good, long life" and that he was only 3 years older than Walt!

3.  When I told Jeri about the death, she told me about the father of one of the guys in Lawsuit (the kids' band), who is in the final stage of some kind of cancer and is not expected to live much longer.  He is the guy who sold all those oranges as a fund raiser for a local music group each December.  We have been buying crates of oranges for more than 15 years.

4.  After dinner, I had a note from another Lawsuit guy, letting us know that his mother had lost her battle with cancer.  We will attend her funeral today. 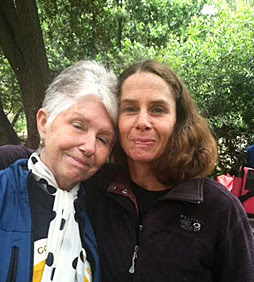 5.  The evening ended with a phone call from another friend -- the one who hosted the recent Chinese New Year Party -- saying that something had happened and she can't walk.  She spent some time in the hospital and is being assessed to see if she is safe to stay in her house or will have to to go a convalescent hospital.

And of course the middle of the day was taken up with going to see my mother for the first visit.

Phil is gone now, off to Oregon to see his family but before he left, he and Jeri took us out for a lovely sushi dinner at Zen Toro, which may be one of my favorite restaurants in Davis.  They are the only Japanese restaurant I've seen which offers "musubi," which I prefer  to call Spam sushi.
Walt was raised in Hawaii, so he likes Spam.  My mother cooked it often when I was a kid so I've always loved it.  But with rice and seaweed, it is particularly delicious. 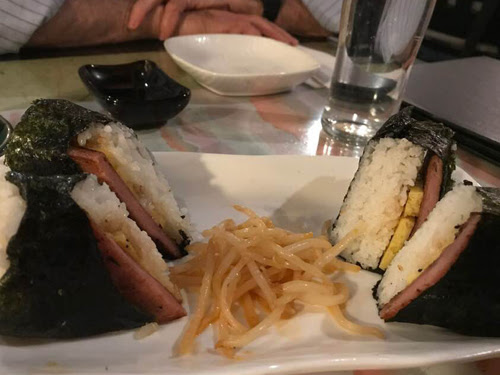 After we had dinner, we walked a couple of bocks to a bar, where Ned (who had by now arrived in Davis) spied an old friend, and sat around drinking beer and visiting.  Walt and I went home early while Jeri and Ned stayed to see Phil off on his trip northward.
Posted by Bev Sykes at 2:15 AM

Email ThisBlogThis!Share to TwitterShare to FacebookShare to Pinterest
Labels: deaths