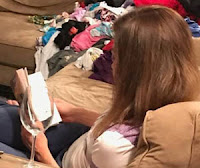 When we were at Tom's last night Laurel was off in a corner trying to finish "Prince Caspian," which she had read many years ago, but had not finished reading for the upcoming book club meeting.


In the morning, Alice Nan was out in the family room in her rocker trying to finish "Prince Caspian," which she had almost finished.  Norm, who had planned to skype in to our meeting, decided not to because he hadn't finished the book.

I was sitting in the living room in the recliner, reading through the long Wikipedia summaries of both "Prince Caspian" and "A Horse and His Boy" because though I had read both books a few months ago, I couldn't remember anything about either of them.

Alice Nan and I laughed about how silly it was that we adults were all working so hard to be ready for a book club meeting led by a 9 year old.  But we all did our homework well and by the time Bri called the meeting to order, we were each able to answer questions and contribute to the discussion.
It had been a quiet day.  I woke up at 5 and made coffee, then settled down with a cup and Wikipedia and promptly fell back to sleep, waking at 9:15 or so to an empty house.  Alice Nan's car was gone and I figured she and Walt had gone off to Mass.

I watched Meet the Press and studied my Wikipedia notes more.  The girls had softball practice, but we decided not to watch them and just hung around home until time to go to Tom's house.  Walt and Alice Nan picked up sushi-to-go for lunch and we gorged ourselves on that.

Around 3, we went to Tom's.  Jeri and Lacie were playing kind of a modern day electronic version of "Clue" and invited me to join. 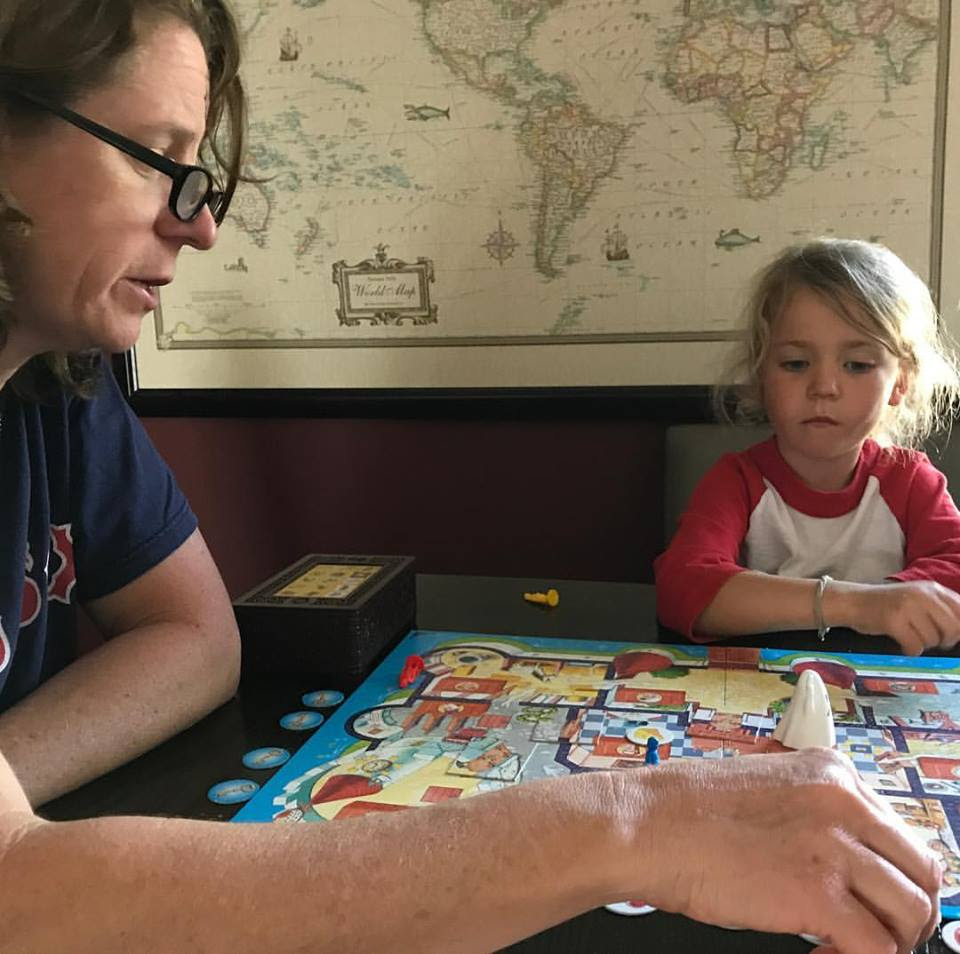 Well, "playing" was kind of relative.  You can play with three players if all three players play, but if one of the players isn't really interested in the game and wants to play standing on the table in her bare feet, or hanging out under the table with her feet peeking over the top, or throwing the dice across the table, all the while protesting that she does so want to play, it makes it difficult. Jeri, bless her, managed to get Lacie through a couple of games, but then we gave it up as a bad idea.  Bri had also decided that while she didn't want to play, she wanted to intrude herself on the game by pounding on the piano or climbing over and under Jeri's legs and making comments about what Lacie was doing wrong.  It just was not the most pleasant experience.

Lacie showed me the books she and Jeri had made and then had an argument with Bri over how much Bri contributed.  Jeri explained that Bri wrote the story, Jeri drew the pictures and Lacie colored them in, so Lacie made sure to point out how colorful each page was.

We watched a bit of football, Tom frustrated because the 49er game was blacked out in this area and so he had to just watch the scores as they came in on his cell phone. 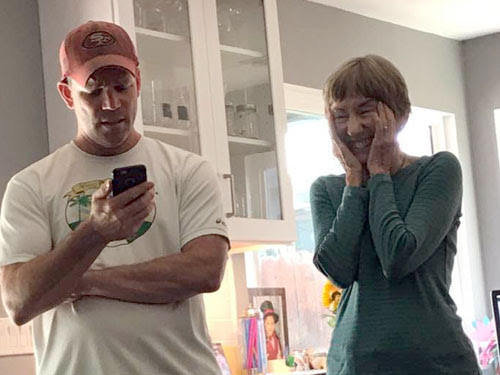 Eventually Brianna set up the play room for the meeting and, as it did last time, a miraculous transformation came over both girls once the meeting started.  Bri was mature, prepared, had great questions, great activities, and a power point presentation she had made herself as well as a "find a word" puzzle she had made on the computer. 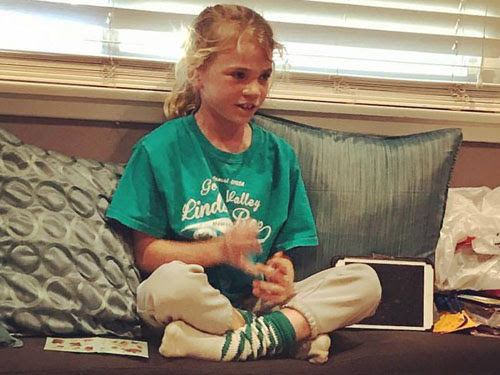 Lacie sat quietly in the hall outside the room and just waited for about an hour while we were talking about the books.  I was so incredibly impressed.  She was lying behind a big bean bag chair and Walt observed that must have been the "green room."

Before we ended with the puzzle, Bri said she had a surprise for us and called Lacie in as a special "guest."  Lacie is too young to read and discuss the books, but she is learning to read and Bri had her read a couple of simple books and she just beamed to be part of the group. 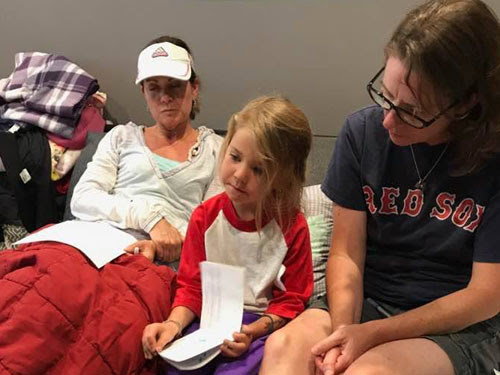 Then Bri passed out "find a word" sheets with names of several of the characters hidden in the mass of letters for us to find, then she collected each of the puzzles and corrected them (we all got 100%) 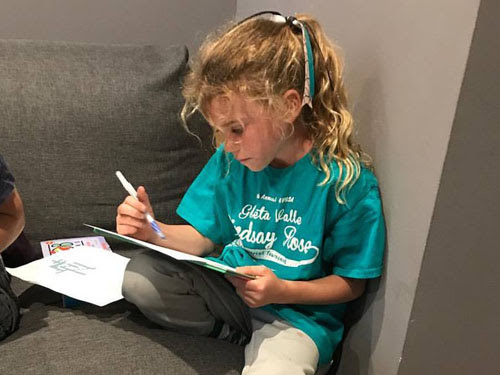 This was a game Lacie could play too and she did surprisingly well...even almost beating Alice Nan, who had trouble finding the last couple of names.  But with Jeri helping Lacie and me helping Alice Nan finally both finished the puzzle and then we moved into the family room, where we watched the movie of Prince Caspian again, since Alice Nan and Jeri had missed it when we watched the night before.

While we were watching our movie, Tom and Walt first sat on the patio, drinking beer and watching football on their outdoor TV (such a great father-son thing to do) 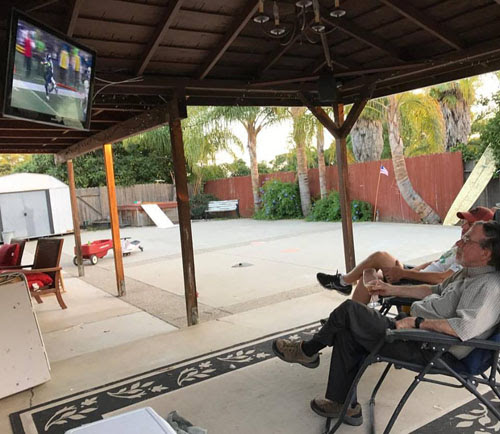 and then Tom cooked dinner and served us all on the couch while we continued to watch the movie, occasionally commenting on something that differed from the plot of the book.

It was just such a fun afternoon and once again I am totally impressed with Brianna's talent for leading the group in such an adult fashion.

Now we are tasked with reading "Voyage of the Dawn Treader" for our next meeting, which will probably take place in Davis in December.
Posted by Bev Sykes at 9:09 AM