If you're looking for Saturday 9, scroll down to find it.

The Internet is both a wonderful resource and often very frustrating.  It used to be much easier to find contact information for people.  Now you have to sell your firstborn child and mortgage your house to MAYBE find what you are hoping to find.  Damn that internet security protection!  (lol)

It started simply today.  Remember that graphic about the Random Walk problem that I posted yesterday, and how indignant I was at the grammatical error "it's" when it should have been "its" and how I was certain that I had not made that typo and that if I had, Fred would have caught it.

Well, this morning I checked the source--the original book--and there it is, in all of its vindicated glory:  "its" not "it's."

Amused, I decided to write to Fred, which I did, but the email was returned as undeliverable.  This is the same email address at Carnegie Melon University (where he is an emeritus) that I have used ever since I have had email.  We exchange one or two notes a year.

Last year, he did not respond to my birthday card to him, or my Christmas letter, or a personal letter I had written.  I wondered if he had died and so I contacted the head of the Physics Department at Carnegie Melon, who told me that as far as he knew all was well with him.

Now he IS 12 years older than I am, so it's not unlikely that he might have died, but I took the physicist at his word.  But now I have this returned e-mail and no apparent way to contact him, other than thru Linked-In, which offers no guarantees that messages will get to him.

Then I realized that being a computer hoarder is a good thing.  YEARS ago, I had a database file of Christmas card contacts in the days when I mailed Christmas cards.  I no longer have that program, I no longer send Christmas cards BUT, at some point I did a WordPerfect file of that database, and there was Fred's address.  So I was able to send off a letter asking for an update, and requesting his wife to contact me if Fred was unable to do so.

Now I wait to see what happens.  But the important part of the story is that yes, the original book did have "its" correct, and it was not printed "it's."  I hope I get to tell Fred this story.

I was a bit more sore when I woke up this morning, but not nearly as bad as I feared it might be.  My tail bone was the most sore, but not all that bad, especially when I was just sitting.

After lunch, I decided to mail the Randomness Journal to my partner and then go to see my mother.  As I left the post office, my tailbone was killing me and the thought of having to walk the entire length of Atria to get to the Memory Unit was just too unpleasant a thought, so I came home and slept for a couple of hours.  The tail bone is still a bit sore, but much better than it was this afternoon

This is Saturday and I normally do Saturday 9, but I had so little to say in answer to the questions, I will just add them here as kind of an afterthought. In keeping with the "spirit" (get it?) of the season, the theme is "Monster Mash" 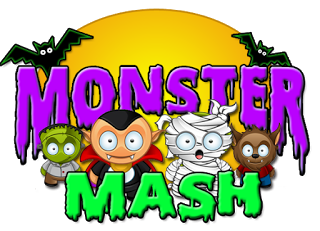 1) In your younger days, did you ever trick or treat while dressed as a monster or ghoul?  No that I remember

2) Do you enjoy being frightened by celluloid boys-gone-bad, like Michael Myers (Halloween) or Jason (Friday the 13th)? No.  I have never watched those movies.

3) When you were a kid, did you ever TP a neighbor's house or indulge in any other Halloween acts of vandalism? (Don't worry, the statute of limitations is up.)  No...I was surrounded by flats and apartment buildings.
4) Will you be attending any Halloween parties this year? If so, will you dress up? No, No.
5) Can you see any Halloween decorations as you answer these 9 questions? No (my office window faces our back yard)

6) While Halloween is most popular in the United States and Canada, and isn't really celebrated at all in Japan or South Korea. How would you explain our Halloween customs to a visitor from another land?  I have no idea.
7) "Monster Mash" is one of Halloween's most played songs. Are you happy to hear it every year? Or does it set your teeth on edge?  I kind of like it.

8) This week's featured artist, Bobby "Boris" Pickett, started as a stand-up comedian who incorporated his imitations of Boris Karlof and Bela Lugosi into his act. Can you impersonate anyone?  Nope
9) Dick Clark was an impossibly young looking 33 in this week's featured clip. Are you often told you look good for your age?  Not in so many words, but most people can't believe I'm 74.
Posted by Bev Sykes at 12:00 AM