Jeri called late this afternoon and at the conclusion of our conversation she said "you sound less stressed than usual."

That was good to hear.  Must be because I've been so obsessed with the randomness journal.  The end is almost in sight--still lots to go, but I'm amazed at how many pages I've been able to create.  One thing I did today was a Day of the Dead altar for Paul and David.  I think it's my new favorite page 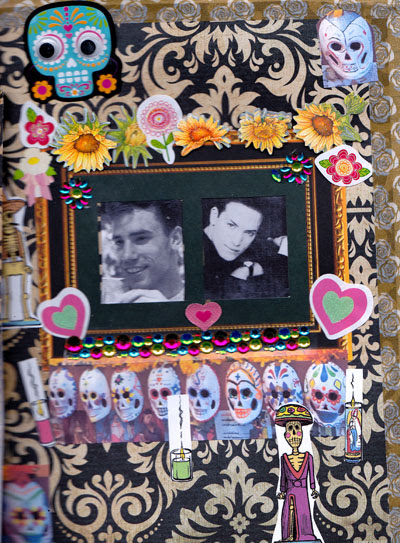 I also did a page on elephant poaching in Africa, juxtaposed with a Far Side Cartoon about an elephant enjoying himself at a party until he noticed the ivory keys on the piano.  Heck, might as well do a bit of proselytizing if I have to fill 160 pages!

I had not been to Atria in 4 days, so I decided to take my mother out to lunch. When I got to her apartment, she was dressed, but asleep on top of the covers of her bed.  I was in no hurry and we had no deadlines, so I just sat and read until she woke up.  She woke up more awake than anybody I've ever seen 10 seconds after they wake up!  When I suggested lunch, she said she was so tired and I asked if she preferred not to go, but she got into it and started to get excited about going out to lunch.  I gave her a choice of Chinese food or Denny's, and she chose Denny's.

On the way to Atria, I had passed on of my favorite trees, which has only half changed color so far, but I really thought it was cool looking. 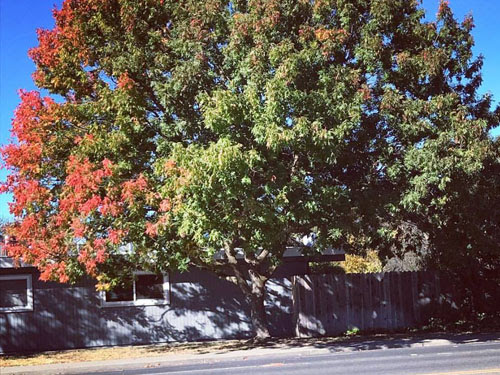 So though Denny's was in the opposite direction, I drove around Davis so I could pass by this tree and she loved it.  I put on my 40s playlist and she sang every word to every song all the way to the restaurant. 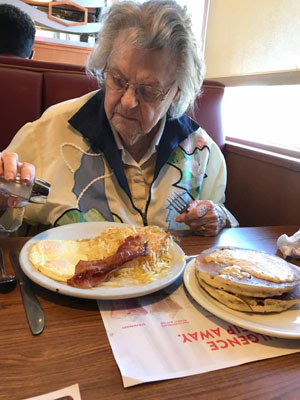 At Denny's they are having new holiday meals, and so I decided to have cranberry-orange pancakes and she said she would too.  They came with eggs, hash browns and bacon.  My mother looked at the plate and I could see that she was overwhelmed by the amount of food.  I kept assuring her that she didn't have to eat it all.

By the end of the meal, she had eaten more than I had and was considering ordering a strawberry shake, but we decided not to get one.

On the way to Woodland, we had passed a place that is in the process of putting together their pumpkin patch.  Right now it's just a big empty field, but the pumpkin and the dinosaur attacking it were kind of interesting, so I got off the freeway and drove around so that we could see it closer and I could take a photo. 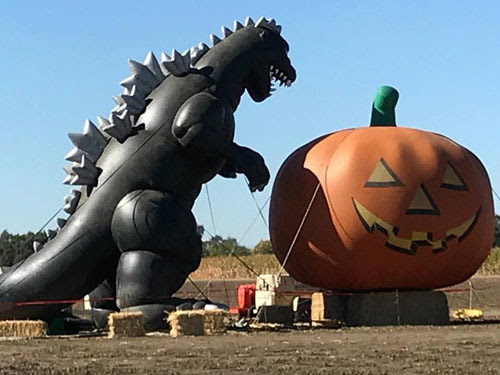 When we got back to Atria I took advantage of the front desk's offer to have someone come from the memory unit to take her back to her apartment so I didn't have to walk all the way to the back of the building.  I was very happy to turn her over to them, so I could get to the store to buy dinner fixings.
The whole day, including my afternoon nap, was just so pleasant that I'm not surprised I didn't sound stressed to Jeri.
Posted by Bev Sykes at 12:41 AM