Several weeks ago, we received an invitation from Atria to come to an "Alzheimers Buddies" brunch on October 8.  I called to RSVP but nobody that I could find had heard of it.  I asked my old friend Brianna, who is in charge of the facility, and she didn't know anything.  She apparently knows nothing of what goes on in memory care.

I sent an e-mail to Jen, who is in charge of memory care, asking about the brunch and saying we had RSVPd.  Jen never answers e-mail, so I did not hear back from her, but when I called this morning to find out if there really WAS an Alzheimers Buddies brunch and was assured that yes, there was.  I still wasn't sure what it was all about.

Unfortunately, I had completely forgotten about it and had already eaten a full breakfast, but Walt had not so he was ready for a brunch.  They said to come at 11.

At 11, we arrived and I asked about the brunch and was told there are "a lot of people in the dining room."  The dining room was closed but when I went in the back way I could see a long table and no other people.  There were a lot of people (including my mother) in the common room.  My mother seemed to be chatting with a young woman an smiling at a child who was also in the room.  I didn't want to interrupt that rare social interaction, so I sat in the empty dining room with Walt.

Finally Ali, one of the aides, whom I really like, told us what was going on.  There is a club at UCD that has made it its project to interact with people in Alzheimers units.  Once a week, they will come and visit their assigned person and try to make a connection.  Nice idea.

The brunch apparently was just to get us all together, buddies with family with Alzheimers clients to have kind of a "family" feel to it all.  I actually only saw two other families, in addition to ours, and they said that not all the buddies could come, so there weren't enough to go around. 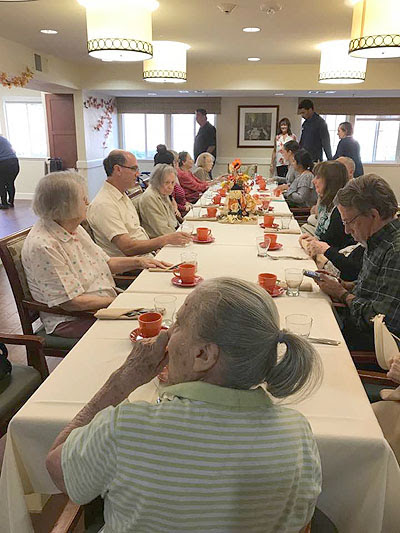 They finally invited us all in to the dining room.  My mother was very confused. 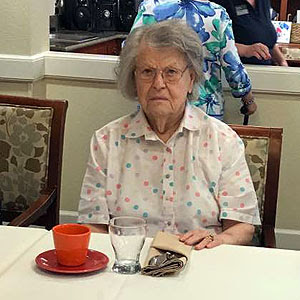 .....but in truth, so was I!  They said that the buddies would go and get lunch for their partners and I guessed that "family" was to get their own lunch.

Someone came around and poured drinks for the Alzheimers patients and ignored the family.  They got everyone at the far end of the table fed and we were still waiting ... and as I have said before, my mother does not wait well.  She kept asking what we were doing and saying she didn't understand any of it. 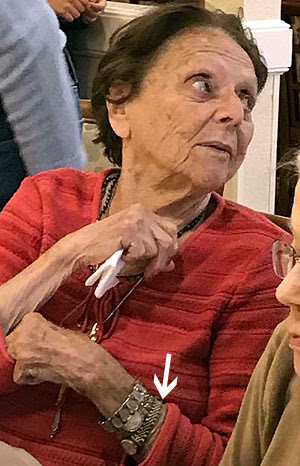 I took some pictures and finally got a picture of her roommate, Marge.  I have never understood a single thing Marge has said and if you ask her something, or tell her something, she answers in a complete non-sequitur.  I don't know if she understands at all.

However, when I took this picture, I was interested to see the two watches on her wrist.  You may remember that some time ago, I ran into Marge's daughter who said that her mother had been "shopping" again.  She was holding a fancy necklace and her daughter was going to see if she could find out who it belongs to.  Marge is comfortable just walking into any room and helping herself to what she finds.  I actually don't mind because my mother has nothing of value and if Marge wants it, I'm not going to make a fuss.

But her watch has been missing for a long time.  I was kind of glad it got "lost" because it doesn't work and she checked it often and drove me nuts trying to figure out what the time is  Today, i discovered that it got "lost' on Marge's wrist.  I kind of suspected as much and she can have it as far as I'm concerned, but I found it humorous to see the long-lost wrist-watch on Marge's wrist.

Food finally came and my god you'd think they thought they were feeding stevedores!

My mother's plate (left) came heaped high with food.  I knew it was overwhelming for her and I got another plate and removed at least half of it (right) before she could start eating.  It reminded me of those Air Force Thanksgiving meals Walt used to talk about, with several courses all piled on top of each other, with a slice of pumpkin pie on top.  The slab of roast beef, which she didn't want, was the size of a man's shoe!

But once I got the plate down to what looked like a big meal, but a manageable one, she actually finished almost everything but her vegetables (which surprised me because that's usually the thing she most eats.  Or used to be.

I didn't eat nearly as much and they had to throw away most of my meal, but I was still full from breakfast.  Walt managed to finish his.

When came time for dessert, they again skipped Walt and me and I had to ask for dessert.

I still don't know what this all accomplished, but it was a nice brunch, the "buddies" seem nice and dedicated and maybe it will give my mother a bit more socialization in the future.  They seem intent on getting people more active.
Posted by Bev Sykes at 12:00 AM

Email ThisBlogThis!Share to TwitterShare to FacebookShare to Pinterest
Labels: Atria, My Mother