Well, this new pen pal project of mine has now been going strong for 142 days, the first letter having been sent to a retired nurse in Germany, from whom I have heard nothing since! Looking back, it was not an auspicious beginning!

I knew when I began that writing "cold" to a name that you find on a list would yield some that would end up being good pen friends, and others with whom you would not click at all.

Over the past five months, I have written to a lot of people and had responses from not everyone, but from a lot [not italicized!] of people.

I started a spreadsheet so I could keep track of who had written when. All of the letters I write are on my computer, so it's easy to keep track of when I wrote and what I said I also keep all the letters in a binder (at present, though I'm sure I will outgrow that soon). But I wanted to have a good idea of how many people to whom I write actually have become correspondents and who has decided, for one reason or another, not to carry the correspondence further. 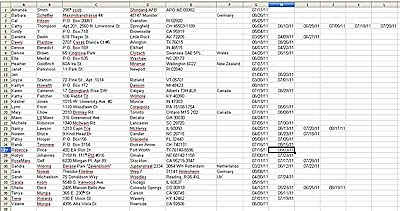 There are 37 on the list and, as you can see, one of them has been particularly prolific, having written, so far, six times (perhaps more--I think the chart extends off the right edge). Two have written four times and four have written three times (I got a letter from two of those today, so they go in the "written four times" column now!). All the others have written twice, but the start date for writing may have only been a month ago, so the number of times they have written isn't necessarily significant.

This does not, of course, reflect the number of postcards exchanged. I've sent more than 100 postcards through PostCrossing, SendSomething and Swap Bot. I've also sent letters and postcards to random soldiers who are having a rough time in Afghanistan or Iraq and have requested word from "home" through Soldiers Angels. Most of these communications are not answered, but I also get lots of postcards through PostCrossing, SendSomething and SwapBot. I have reached that stage of mail nirvana when it is a rare day that I do not get at least ONE personal piece of mail. It helps balance off the daily catalogs from fat lady stores!

It's not surprising that many of the people with whom I exchange introductory letters don't respond. I have found in researching sites which are posting requests for penpals that many are young women, in their 20s, and sometimes teens. There are few old farts like me and while I have made friends with a few younger women, many times we don't speak the same language.

It's great when you hit a common ground, though. I heard from one young woman recently who has a great interest in history and works at the archives of her local library helping people do genealogical searches. I mentioned how fascinated I was by Thomas Jefferson and you'd think I had handed her $100. I don't know if our exchanges will continue, but I am enjoying getting to know her.

Another woman wrote because she saw my address on my pen pal site. She was actually only the second person who wrote to the address posted on that site. But what a deight she is. We've exchanged a couple of letters and I hope that she sticks around to become one of the regulars.

There have only been a few people that I've either ignored or dropped. I made the mistake of joining the IUOMA (International Union of Mail Artists) and discovered that the look of a piece of mail and what you sent with it was more important than actual content of a letter. I'm not an artist and am definitely out of my element, so I turned down a guy from Brasil (who persists) and ignored a woman who wrote recently with such lovely things that I am intimidated to send her "artwork" (mine usually consists of stickers on white paper!).

I also finally ignored a guy from Brasil. It is not my idea to write to men, but this guy was from Brasil, and I haven't had any Brasilians in my life in awhile. But I haven't had any Brasilians in my life in awhile :) so I'd forgotten what 20-something Brasilian men were like. His first letter sounded like he was interviewing me as prospective dating material and when I wrote back and pointed that out, he sent me a 4 page letter listing everything he liked in music, dance, books, beaches, food, movie stars, singers, etc., etc., etc. (I suspect there wasn't a "book" category, now that I think about it). That's it. No narrative, just a list of stuff. I decided we weren't a marriage made in heaven and I did not respond.

So as I review this enterprise, I'd say that on the whole I'm pleased. I think I am developing a few very nice penpal relationships and if I can have a few solid friends like that, I'll be happy...anything else is the icing on the cake.
Posted by Bev Sykes at 7:51 AM

i agree with every thing you said and wow you actually keep a spread sheet of letter writers wow . Im impressed with how organized you are but after writing you for awhile now I should have seen that you are organized to say the least . Oh well take care and have a wonderful day .