One of my favorite songs from You're a Good Man, Charlie Brown is "Suppertime," where Snoopy dances on his doghouse because he's so excited about Charlie Brown about to arrive with his supper dish.

Polly sleeps most of the afternoon, but around 5 p.m., she comes into my office and stands under my desk and begins to whine very softly. I look down and pet her on the head. She does a little dance, but it's too early for a meal, so she eventually goes back into the family room. When Jeopardy is over, I look at her and say "Polly--do you want dinner?" Her ears pop up and she gives her happy bark and goes into Snoopy's dance as she waits for me to put food in the bowls and stir in a spoonful of cottage cheese.

There is the sound of happy eating as the dogs eat from their individual bowls and then check out everybody else's bowls, after which they settle down, with full tummies.

I was thinking about family meals and how they differ from Snoopy's meal and the dogs' meal time.

When I was growing up, we had breakfast and dinner together around the kitchen table every day. My mother was an excellent cook, but a basic cook. She was a meat and potatoes cook, for the most part. The first time she made lasagna we thought it was so exotic. Peach always loved her meatloaf, a taste I have not been able to duplicate, which is strange because she swore she never made it the same way twice. She started with hamburger and added whatever leftovers were in the fridge. But it was unique.

My 100% Irish father always joked that he was really part Italian because he loved Italian food so much. We had Italian dishes so often that I never choose Italian as an ethnicity when I'm asked where I would like to eat, if we are going out. Italian never feels "special."

My father was out of town at least two nights a week and my mother took a night off, sort of on those nights. We might have scrambled eggs or pancakes or, a real treat, Swanson fried chicken dinners, when the TV dinner first made its appearance on the scene. Sometimes we had milk toast, pieces of lightly toasted bread spread with butter in a bowl of warm milk, sometimes sprinkled with sugar. I loved those weird dinners.

When I think about the family dinner of my childhood, I know that my memories are tinged with the unpleasant times. I know we must have had fun meals, but I only remember the tenseness, hoping the telephone would not ring. We could eat at 4 p.m. or at 8 p.m. but if the telephone rang, it ruined dinner because my father would be furious that someone had dared to interrupt his dinner hour. He then would be loudly silent for the rest of the meal, and the rest of the evening...and sometimes for a day or two afterwards.

You never knew what he would be angry about. I was a fat kid yet I remember the night that he got angry with me for saying I was too full for dessert (dessert was always part of our meal) because I was supposed to eat all my dinner, even the sweet dessert.

As Karen got older, dinnertime was the time when the two of them would get into arguments. She had very strong political, philosophical and moral opinions and they were usually totally different from his. The two of them would yell and scream at each other, while my mother silently cleared the table and I hid in the bedroom. I can't even tell you what they argued about, because as soon as I could tell where the conversation was headed, I got the heck out of there.

When Walt and I married and our kids came along, I was determined we would have pleasant family dinners. I really don't know what memories our kids have of family dinners, but what I remember is that I spent a lot of time in the kitchen, getting more food, or dishing up someone's plate (my mother always dished up servings of food for people, so I did too). It took me years before I had the a-ha moment of realizing that it made me nervous to just sit at the table with the family and have a good old conversation because I was so programmed that any serious conversation could lead to unpleasantness.

Things were fun for me when we had foreign students at our table and I remember when Nelson and Sonia were living with us and Nelson decided that we would only speak Portuguese one night a week. The fact that only Nelson and Sonia knew Portuguese made the conversations rather stilted. But we tried it. And I remember when Chieko from Japan, Ndangi from Zaire, and a guy from Venezuela were all here at the same time and how funny some of those conversations could be.

With the kids all adults, on those rare occasions when someone is here for a meal, it is more fun now. I don't feel uncomfortable any more and can enjoy sitting and talking and laughing.

When it is just Walt and me, dinner is pretty silent. We often seem to have run out of things to talk about after nearly 50 years. So we eat silently and watch television -- something else I never thought we would do. Or we laugh at the antics of the dogs, waiting for handouts from our plates.

I love having meals at my mother's now because we do sit around and talk to each other, and that is very special. 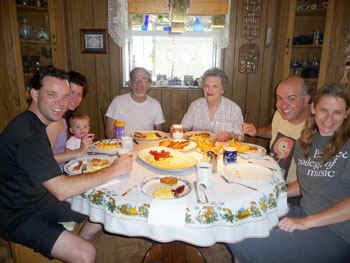 Though I notice that if a serious discussion erupts, my mother generally gets up and starts cleaning the kitchen.

Email ThisBlogThis!Share to TwitterShare to FacebookShare to Pinterest
Labels: dinner

Wow is'nt it funny how things happen when we are kids and it so profoundly effects us as adults even such a simple thing as an argument after dinner .

When our girls were still all at home, we always ate dinner together. If the phone rang during the meal, whoever answered it would say, we're at dinner - we'll call you back. My rule.

The day my mother died, when all the kids and spouses were at the house, our sons-in-law cooked dinner for us on the grill. When we sat down for the first shift at the table (table only seated 6), we looked around and we were all in our traditional seats. Lots of laughing and tears over that.

Lots of memories - good and bad - center around mealtimes and food.

The topic is pretty complicated for a beginner… But thank you, a very interesting note!

Yeah, it is clear now…
Thanks for the different recommendations I have learned from your website.