* Obviously the computer turned off and turned on in an error-checking mode, which always strikes fear and terror in my heart because I know I should be checking something but I never know what I need to check. I always just start it in normal mode and hope I didn't screw anything up.
* It reset the clock to October 2003
* It somehow erased one of my virus checkers--I got notice that I had to reinstall it.
* It erased this brilliant journal entry that I had written for this entry and I've been trying (unsuccessfully, so far) to recreate it.
* It also erased the notes I had made for the brilliant journal entry I have been unable to recreate (trust me, it was probably the best entry I had ever written, now lost forver! :) ... and I have this bridge I'm trying to sell...)
* The printer went off line
* All the titles and descriptions of all programs were wiped out of the Comcast box. (Takes about 24 hours to get them all back after a power failure). Fortunately I am a TV addict, so know what programs I want to watch and what channels they are on, because if I call up the list of programs, every slot just says "To be announced."

I spent a long time getting things (except the cable box) back the way they should be, including re-installing the corrupted software. When the printer came on line, I found out I was out of ink, so I had to go out and buy more printer ink. This took about an hour because they didn't have ink for my printer's model at the local CVS which meant I had to drive across town to Office Max and, of course, you can't just go through Office Max and only buy the thing you came for. Half and hour and nearly $100 later, I was headed home.

There was a chicken cooking in the crock pot and I was thinking, as I drove home, that it should just about be done, but when I went in the house, the crock pot had, of course, also gone off when the power went out, only I didn't realize it until the chicken was nearly cold...tepid, actually. I don't know how long it had been standing in the barely warm crock pot and I had visions of food poisoning.

At least it was juicy and tasty, and so far no signs of food poisoning, but I may be a bit premature to declare the all-clear.

We are so complacent about the electronic gadgets in our lives and it's hard to realize that in literally an eyeblink, our entire life could change. Of course nothing that happened this afternoon was catastrophic, but it does make you think about how dependent we are on that little connection to electricity!

I had a big surprise when I woke up this morning. I went to get my Birkinstocks, which were lying beside my recliner and when I picked them up, this huge worm fell out of them.

I don't have a clue where it came from. I was wearing the Birkinstocks yesterday, so wherever it came from it had to be during the night. I somehow can't imagine the thing crawling in here from outside, especially over the metal tracks of the sliding glass door.

I couldn't have carried in on my shoe yesterday or I would have squished the thing flat.

I guess I'll never know...but the dogs sure enjoyed checking it out, until I scooped it up and tossed it in the tall grass by the back fence. 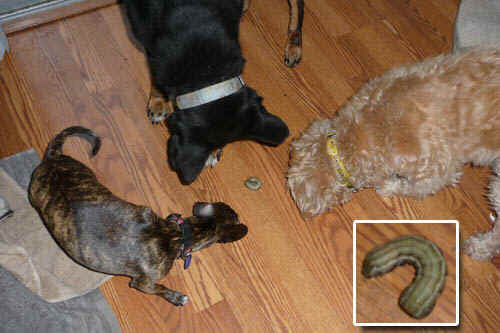 Looks like the dogs were not effected by the power outage LOL !!!

At least you know that it's "NCIS" and "NCIS: Los Angeles" tonight.

Ick, you might've stepped on it.

I do hate having to reset everything. And yes, we're terribly dependent on that power grid.